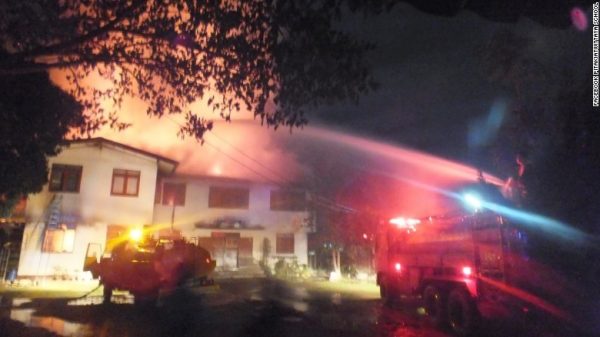 Pitakiatwittaya School Christian elementary school on fire
Share:
Seventeen girls have been killed in a fire which broke out in a school dormitory where they were sleeping Sunday night.

More than a dozen others are missing in the charred remains of the dorm, which housed girls aged between 5 and 12 years old, according to lead investigator, Police Captain Kachornsak Pongthit.

Investigators are trying to confirm what caused the fire, which is believed to have started around 11 p.m. local time Sunday (midnight Saturday ET) at the private Pitakiatwittaya School Christian elementary school in Thailand’s northern Chiang Rai Province.

Thirty-eight children were sleeping in the dorm at the time of the blaze, police said.

In a message on its Facebook site, the school, which is known for providing free education to hill tribe children, posted an image and said the school would be closed until Friday due to the blaze.

Parents rushed to the school Monday morning to see if their children were safe.

“It is still very chaotic here,” the school’s manager Rewat Wassana told CNN. “We are in the process of identifying bodies, none of the parents can claim their children’s bodies yet,” he said.
CNBC