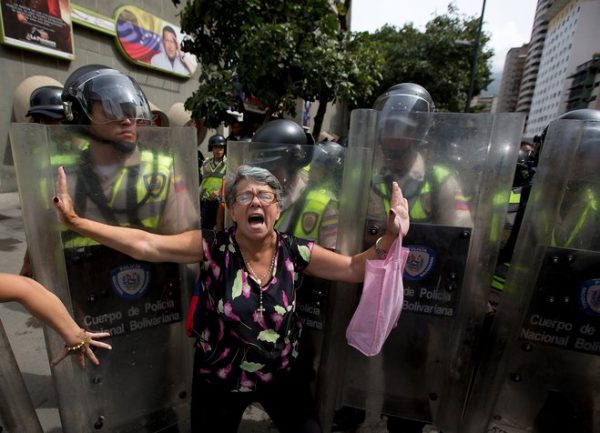 An angry demonstrator is blocked by Bolivarian National police during an anti-government march to the headquarters of the national electoral body, CNE, in Caracas, Venezuela, Wednesday, May 18, 2016. Opposition protesters were blocked from reaching the CNE as they demand the government allow it to pursue a recall referendum against Venezuela’s President Nicolas Maduro. (AP Photo/Fernando Llano)
Share:

In the third day of opposition rallies in the past week, several thousand protesters descended on downtown Caracas for a march to the national election board, witnesses said.

But National Guard soldiers and police cordoned off the square where they planned to meet, so protesters instead milled in nearby streets waving flags, chanting “the government will fall” and pressing up against lines.

Authorities shot tear gas to disperse them several times, sending hundreds of panicked people running down streets. A few demonstrators were arrested and one young man was carried off unconscious, according to Reuters witnesses.

Opposition leaders have warned that Venezuela is a “time bomb” and have said blocking democratic avenues for Maduro’s removal means people will increasingly take to the streets. Spontaneous demonstrations and looting are becoming more common amid worsening food shortages, frequent power and water cuts, and inflation that is the highest in the world.

“They’re scared,” Alfredo Gonzalez, 76, from the 23 de Enero slum, said at the Caracas demonstration as he wore a scarf over his mouth.

“Venezuelans are tired, hungry,” said Gonzalez, who added that he had been sprayed with pepper gas.

Both protesters and security forces appeared more numerous than in other rallies this year, although the demonstration was still smaller than anti-government protests that turned violent and shook the OPEC country for three months in 2014.

While Venezuelans are now much angrier at their deepening economic crisis, many are too busy queuing up for scarce food or too fearful of violence to join marches. Others are pessimistic about the chances of a recall referendum.

In Tachira state, which saw the most violent scenes during the 2014 protests that resulted in 43 deaths, troops also blocked scores of marchers from reaching the local election board office on Wednesday. At a demonstration in the Caribbean coastal town of Coro, protesters formed a chain in the streets.

Maduro, a 53-year-old former bus driver who narrowly won election to replace the late Hugo Chavez in 2013, accuses Capriles and other opposition leaders of seeking a coup with the help of the United States.

“You don’t like Maduro? Well, deal with it,” said Vice President Aristobulo Isturiz, who has repeatedly said there will be no recall referendum this year.

The opposition coalition, capitalizing on popular discontent over the economy, won control of the National Assembly in December elections. But all the legislature’s measures have been shot down by the government-leaning Supreme Court.

The opposition wants a recall referendum against Maduro this year to force a presidential election. But ruling Socialist Party officials say there is no time to organize a vote in 2016 and the election board is dragging its feet on paperwork.

At the weekend, Maduro declared a 60-day state of emergency, widening his powers to sidestep the legislature, intervene in the economy and control the streets, because of what he called U.S. and domestic plots against him.

Authorities also closed subway stations in Caracas on Wednesday to impede the protesters.

“The people will stay in the street unless there is a recall referendum,” said demonstrator Roberto Campos, 43, his forehead bleeding from where he said he had been hit by a tear gas canister.

Protesters around him scrawled “recall” on security forces’ riot shields. Many drivers honked their support, while government supporters shouted against the protesters from balconies of nearby buildings, even waving a sign that read: “‘Chavista’ territory.”

Latin America’s leftist bloc is shrinking with swings to the right in Brazil and Argentina but Maduro still has strong support from Cuba, Ecuador, Nicaragua and Bolivia.

Bolivian President Evo Morales condemned what he called “aggressions” against the Venezuelan leader. But the secretary-general of the Organization of American States (OAS), Luis Almagro, who has often crossed swords with Maduro, wrote a stinging letter calling him a “puny dictator.”