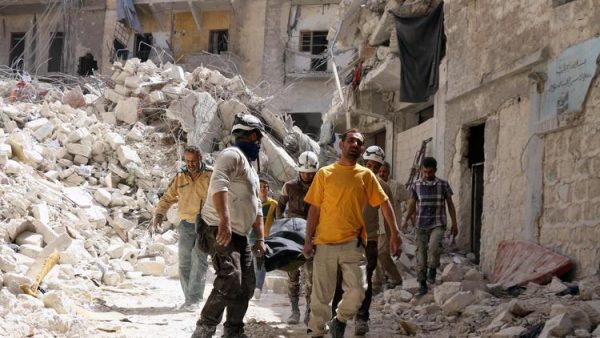 Syrian Civil Defense workers evacuate a body after a government airstrike on Tuesday in the northern city of Aleppo. (Thaer Mohammed / AFP/Getty Images)
Share:
In what a top U.N. official called a “novelty,” world powers called Tuesday for “air bridges” that would allow humanitarian supplies to be flown into Syria to relieve civilians who have taken the brunt of the country’s civil war.

The proposal came after the Syrian army enraged aid groups last week by blocking a convoy to the besieged Damascus suburb of Daraya, even though the convoy had “obtained prior clearance by all parties that it could proceed,” according to a statement by the United Nations and the International Committee of the Red Cross.

The idea for an air bridge — essentially a route to allow for the delivery of supplies — came during a meeting in Vienna of the International Syria Support Group, a 21-nation body working to end the war, now in its sixth year.

“Starting on June 1, if the U.N. is denied humanitarian access to any of these designated areas, the International Syria Support calls on the World Food Program to immediately carry out a program for air bridges and air drops to all of those areas in need,” U.S. Secretary John Kerry said in a televised news conference after the session.

The international support group also said it would try to strengthen a fragile cessation of hostilities in Syria and to jumpstart a stalled political transition process intended to create a “united, nonsectarian Syria.”

The cessation of hostilities, first introduced in February to much doubt, saw a weeks-long reduction in violence and a drop in casualties. But the violence crept back, according to De Mistura, as both rebels and the government launched offensives around Aleppo city.

The proposals for breaking the deadlock evoked a sense of the group’s exasperation with both Syrian President Bashar Assad and the armed opposition factions pitted against him for control of the country — and what appeared to be a new willingness to bypass uncooperative parties.

However, the group struggled to find a new date for a fresh round of peace talks, a sign of the gaps that still exist between cochairs Washington and Moscow.

In addition to the army blocking the convoy in Daraya, rebel forces blocked access to Fua and Kafraya, a pair of besieged loyalist towns in Syria’s northwestern Idlib province, preventing a U.N. assessment mission to the area, U.N. Senior Advisor Jan Egeland said.

The International Syria Support Group all but sidestepped the most difficult issue confronting it, the role of Assad in any political transition.

Disagreement on his future has been a major stumbling block that beguiled previous iterations of the so-called Intra-Syrian Talks, indirect peace negotiations anchored by De Mistura.

The Syrian government and Russia say there can be no preconditions to Assad’s presence and that only Syrians can choose their leader. They point out that the opposition’s main representative, the High Negotiations Committee, was set up, housed and supported by Saudi Arabia, Assad’s top regional enemy, and cannot be impartial.

Rebels insist, and the U.S. agrees, that there can be no meaningful end to the war with Assad still at the helm.
CNN