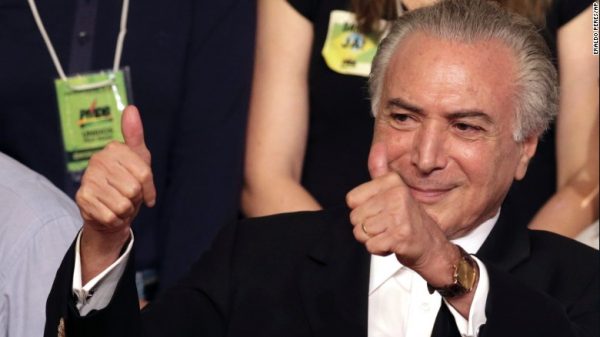 Lebanese-Brazilian Michel Temer , considered the most powerful Lebanese may end up leading Brazil as of today if Senate impeaches president Roussef
Share:

Brazil’s Senate will vote on Wednesday on whether to put President Dilma Rousseff on trial for breaking budget rules, amid expectations she will become the country’s first leader in more than two decades to be removed from office.

If her opponents garner a simple majority of the 81 senators, Rousseff will be suspended for up to six months during the trial and Vice President Michel Temer will take power.

With well over half of senators telling newspapers they will vote to try Rousseff, Brazil’s first female leader is expected to leave the Planalto presidential palace on Thursday, following 13 years of leftist Workers Party rule in Latin America’s largest economy.

The political crisis has hit at a time when Brazil had planned to be shining on the world stage, as it prepares to host the Olympic Games in Rio de Janeiro in August.

Senators are due to start discussion of the motion at 9 a.m. (1200 GMT) after each member of the upper house gets the chance to speak. The final vote is expected to take place around 8 p.m. (2300 GMT).

Rousseff, who has said her impeachment is illegal and branded it a ‘coup,’ has vowed to fight the process until the last minute. Her government appealed to the Supreme Court on Tuesday.

“I will not resign, that never crossed my mind,” Rousseff said in a speech on Tuesday, to cheers from supporters.

Brazil is struggling with its worst recession since the 1930s and the country’s biggest-ever corruption scandal – a long-running probe into a vast kickback scheme at state-run oil company Petrobras (PETR4.SA).

The economic crisis and the Petrobras investigation have paralyzed Rousseff’s second-term administration.

There are worries the tense political situation may spark protests that could turn violent.

On Wednesday, anti-impeachment protesters blocked roads with burning tires around Sao Paulo, the capital, Brasilia, and other cities, snarling morning traffic and prompting clashes with police. The Workers Party and labor unions have called for a national strike.

The vote will cap a chaotic week that started with the newly installed speaker of the lower house, Eduardo Maranhao, saying he had annulled the full chamber’s April 17 vote to impeach Rousseff. He argued the vote contained procedural flaws.

Maranhao withdrew his decision on Tuesday, following complaints it was illegal. That cleared the way for the Senate vote.

If the case goes to a trial in the Senate, presided over by the head of the Supreme Court, Rousseff’s opponents are confident they can muster the two-thirds of the 81 senators, or 54, needed to unseat the unpopular president. Temer would then fulfill the remainder of her mandate until elections in 2018.