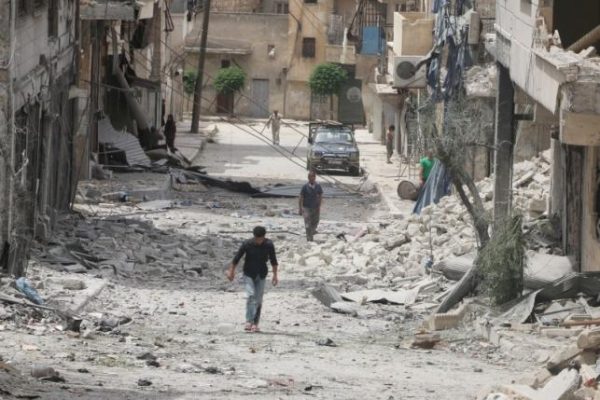 People walk on the rubble of damaged buildings after an airstrike in the rebel held area of Aleppo’s Baedeen district, Syria, May 3, 2016. REUTERS/Abdalrhman Ismail
Share:

The United States said on Wednesday it had agreed with Russia to extend a cessation of hostilities agreement to include Aleppo where intense day-long violence between Syrian rebels and government forces killed dozens of people.

The State Department said the truce went into effect at 12:01 a.m. Damascus time on Wednesday, but acknowledged the fighting had not stopped.

U.S. Secretary of State John Kerry said he was not surprised that fighting continued in some areas, adding both sides were working to communicate with commanders in the field.

Kerry, meeting with EU foreign policy chief Federica Mogherini at the State Department, said it was vital that both sides abide by the agreement. He called on Russia to use its influence over President Bashar al-Assad to stop the violence.

There was no immediate response from Moscow to the announcement of an agreement, but the Syrian army said it would implement a “regime of calm” in Aleppo for 48 hours as of Thursday.

The surge in bloodshed in Aleppo, Syria’s largest city before the civil war and biggest strategic prize, wrecked the first major “cessation of hostilities” agreement of the war, sponsored by Washington and Moscow, which had held since February.

In battles on Wednesday between rebels and government forces in western Aleppo, opposition forces said they were forced to retreat by heavy aerial bombing.

Russia’s U.N. ambassador, Vitaly Churkin, addressing a U.N. Security Council meeting on the situation in Aleppo, said an agreement would have been announced on Tuesday but opposition attacks in Aleppo had prevented it from happening.

“The deterioration in certain areas of Syria, including Aleppo, is a serious source of concern. The government forces are fighting off a large-scale offensive by the jihadists (in Aleppo),” he told the council.

Kerry said the United States was coordinating closely with Russia to finalize strengthened monitoring of the extension of the cessation of hostilities to Aleppo.

He said he expected a meeting of the International Syrian Support Group, a grouping of foreign ministers of European and Middle Eastern government chaired by Kerry and Russian Foreign Minister Sergei Lavrov, to meet within the next two weeks.

In Berlin, the German and French foreign ministers said achieving a ceasefire in Aleppo was critical to renewing peace talks.

“I believe everyone knows and can conclude that there could be no return to the political talks in Geneva if a ceasefire in and around Aleppo is not observed,” German Foreign Minister Frank-Walter Steinmeier told reporters.

In Geneva, a senior U.N. humanitarian official said the Syrian government was refusing U.N. demands to deliver aid to hundreds of thousands of civilians trapped by the fighting, including many in devastated Aleppo.

The Syrian Observatory for Human Rights said dozens had been killed on both sides in what it described as the most intense battle in the Aleppo region in a year. Government forces were reinforced by allies from Lebanon’s Hezbollah, it said.

A rebel fighter said about 40 government soldiers had been killed, while rebel losses stood at 10 dead. A military source denied there had been heavy casualties in army ranks, but said dozens of civilians and many rebels had been killed.

Rebel sources said insurgents at one point captured a strategic location known as Family House, but later lost it after the government side sent in reinforcements.

During the Security Council meeting, U.N. political chief Jeffrey Feltman said a consolidated truce and greater humanitarian aid access were needed to ensure the next round of Syria peace talks – set for this month – were credible. Without progress, he said there was a “real risk of a failed political process.”

“The current levels of violence in Aleppo, in particular, negatively impact the ability of the Syrian parties to engage in negotiations,” Feltman said.

U.N. aid chief Stephen O’Brien told the 15-member council that life for the people in Aleppo was horrendous and they were “living under daily threat and terror.”