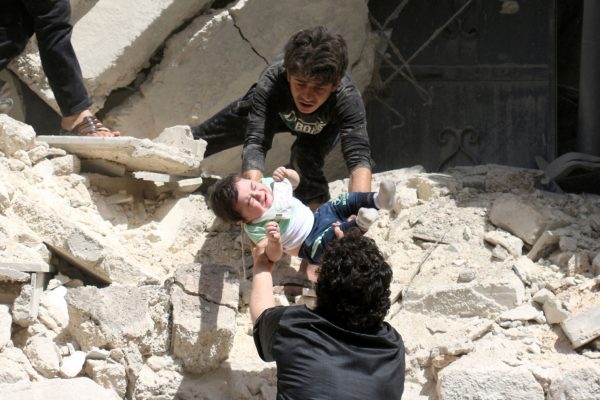 Syrians evacuate a toddler from a destroyed building following a reported air strike on the rebel-held neighbourhood of al-Kalasa in the northern Syrian city of Aleppo on April 28. (Ameer Alhalbi/AFP/Getty Images)
Share:

THE DEVASTATING bombing of an Aleppo hospital on Wednesday night — which killed at least 50 civilians, including six medical staff and a number of children — was not an accident, and it should not have been a surprise to promoters of the Syrian “cease-fire.” For weeks the regime of Bashar al-Assad has been proclaiming its intention to recapture the rebel-held eastern side of Aleppo, with help from “our Russian partners,” as the prime minister put it. The bombing of hospitals and food markets, in turn, is a standard component of Mr. Assad’s military campaigns, intended to drive civilians out of rebel-held areas.

By Saturday, the Aleppo offensive was in its ninth day; according to the Syrian Observatory for Human Rights, 226 civilians had been killed by bombing and shelling through Friday, including 50 women and children. Yet U.S. and U.N. officials were still clinging to the fiction that the “cessation of hostilities” they said began on Feb. 27, and which the Assad regime never fully observed, was still somehow alive. “I think we would still maintain that it had largely held,” State Department spokesman John Kirby said Thursday, as rescuers pulled children from the ruins of the hospital’s pediatric ward.

U.S. policy in Syria has devolved into a sickening routine. Secretary of State John F. Kerry negotiates with Russia on steps to end the violence, while insisting that the United States will turn to a “Plan B” if they fail. Russia and the Syrian regime then make a mockery of the agreements, continuing to bomb civilians and attack Western-backed rebels. Mr. Kerry duly denounces the atrocities, as he did on Thursday, when he pronouncedhimself “outraged” by the “deliberate strike on a known medical facility.”

Then, forgetting his previous talk of a Plan B, Mr. Kerry returns to the Russians with another appeal for cooperation. That’s what happened after the hospital bombing: The State Department recommitted to the “political process,” according to Mr. Kirby, who went so far as to describe Plan B as “mythical.” On Friday, a new, partial cease-fire was announced, beginning Saturday in the Damascus suburbs and the coastal area of Latakia. Aleppo, where the regime’s offensive is taking place, was excluded.

In fact, there does appear to be a U.S. Plan B, according to the Wall Street Journal, which recently reported that it involved supplying more powerful weapons to the Syrian rebels, possibly including missiles that could shoot down Syrian planes and helicopters. It has been widely reported that Mr. Kerry himself has lobbied for more aid to the rebels as a way of gaining leverage over the Assad regime and Russia. And yet action has been held up, as throughout the Syrian civil war, by President Obama, who, fearing U.S. intervention will make the situation worse, rejects any steps that could make it better.

The latest atrocities should prompt Mr. Obama to reconsider. Measures to strengthen the rebels, and ground the government’s air force, are not only the morally right response to the deliberate bombing of hospitals and food stores. Pragmatically, they offer the only way to force the Assad regime and its allies to negotiate seriously about Syria’s future. The president still has the chance to mitigate his past mistakes and create a path toward peace in Syria. He should seize it.