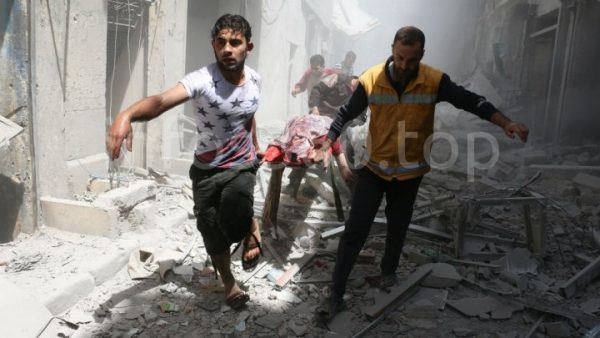 Syrian men carry a body on a stretcher amid the rubble of destroyed buildings in the northern Syrian city of Aleppo, on April 29, 2016
Share:
Syria called local truces near Damascus and in a northern province on Friday but no halt to combat on the main battlefield in Aleppo, after a surge in fighting the United Nations said showed “monstrous disregard” for civilian lives.

A new “regime of calm” began at 1:00am on Saturday and was scheduled to last one day in the capital’s eastern Ghouta suburb as well as three days in the northern countryside of the coastal province of Latakia, the army said in a statement.

But by excluding the city of Aleppo, scene of the worst recent violence, the narrow truces were unlikely to resurrect a ceasefire and peace talks that have collapsed this week.

Violence shook Aleppo for the ninth consecutive day on Saturday, as crude barrel bombs crashed into residential neighbourhoods amid wailing ambulances. According to the British-based Syrian Observatory for Human Rights, almost 250 civilians have been killed in the air strikes on Aleppo since April 22.

‘THIS WAR IS GOING TO ENTER ANOTHER BRUTAL PHASE’

“The most worrying is that this escalation could be an indication of an imminent attack on the city itself – something that the government has been talking about as far back as two weeks ago,” said Adam Pletts, FRANCE 24’s correspondent in the region.

A Syrian military source said Aleppo was excluded from the newly announced truces “because in Aleppo there are terrorists who have not stopped hitting the city and its residents … There are a large number of martyrs in Aleppo, which is why the situation is different there.”

One raid hit a local clinic in the rebel-held Al-Maja neighbourhood, wounding several people, including a nurse, the civil defence group known as the White Helmets said.

The clinic, which had been providing dental services and treatment for chronic illnesses for about five years, was badly damaged.

Medical equipment lay scattered across the clinic’s floor, covered in debris and dust, an AFP correspondent there said.

“We serve civilians in this establishment, there were no fighters here,” said Hassan al-Ahmad, who heads the clinic.

It was the second time this week that an air strike hit one of the few medical facilities still operating in rebel areas.

Late Wednesday, air strikes hit the Al-Quds hospital and a nearby block of flats in the Sukkari neighbourhood, killing 30 people.

Dr. Mohammad Wassim Maaz, known as the most qualified paediatrician in eastern Aleppo, was among the dead.

“He was friendly, kind and he used to joke a lot with the whole staff. He was the loveliest doctor in our hospital,” Dr. Hatem, a colleague, wrote in a letter published by The Syria Campaign advocacy group.

US Secretary of State John Kerry called on Moscow to press its Damascus ally “to stop attacking civilians, medical facilities, and first responders, and to abide fully by the cessation of hostilities”.

Al-Quds was supported by both Doctors Without Borders and the International Committee of the Red Cross.

Aleppo was once Syria’s economic powerhouse, but it has been ravaged by fighting since 2012, when rebels seized the east of the city, confining the government to the west.

Since the conflict in Syria erupted in 2011, more than 270,000 people have been killed and millions more been forced from their homes.