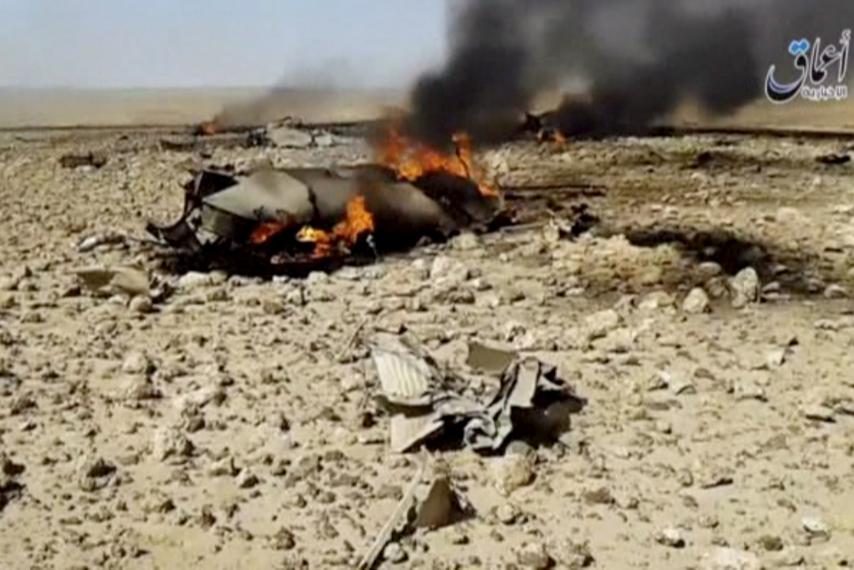 A view of the burning wreckage of a plane that crashed southeast of Damascus, Syria on April 22. SOCIAL MEDIA WEBSITE VIA REUTERS TV
Share:

The Islamic State group says its fighters have captured a Syrian pilot after his plane was shot down near Damascus.

The IS-affiliated Aamaq news agency on Friday posted a video that purported to show the wreckage of the MIG-23 plane which it said was shot down by anti-aircraft weapons near Mt. Dakwah southeast of Damascus.

The militants are seen picking up parts of the wreckage, with other parts still in flames. A militant is shown stepping on a Syrian flag marking part of the wreckage.

Aamaq later said that IS fighters captured the pilot, identified as Azzam Eid, after he landed with his parachute near the crash site.

There was no comment from the Syrian government on the downing of the plane or the IS claim of responsibility.

In another development activists say Syrian government forces and Kurdish fighters are clashing for a third day in the northeastern city of Qamishli, with at least seven people killed.

Lezkin Ibrahim, a Kurdish media activist in Qamishli, says the fighting Friday was concentrated in the city center, forcing residents to stay indoors and shops to close.

He says Hawar news, the outlet where he works, has recorded 10 civilians and six Kurdish fighters killed. He says the wounded are being taken to neighboring towns for treatment because local hospitals are blocked by the fighting.

The Britain-based Syrian Observatory for Human Rights, which monitors the conflict through activists on the ground, says the clashes killed seven, including a child and a woman.

Kurdish forces, who have carved out a zone of semi-autonomy in northern Syria, seized the Alaya prison in Qamishli on Thursday after government forces inside it surrendered.

Ibrahim says the fighting started after government forces attacked a Kurdish security patrol, killing two of its members on Tuesday. He says government artillery have shelled the city for the first time, and that government helicopters flew over the city on Friday.
AP