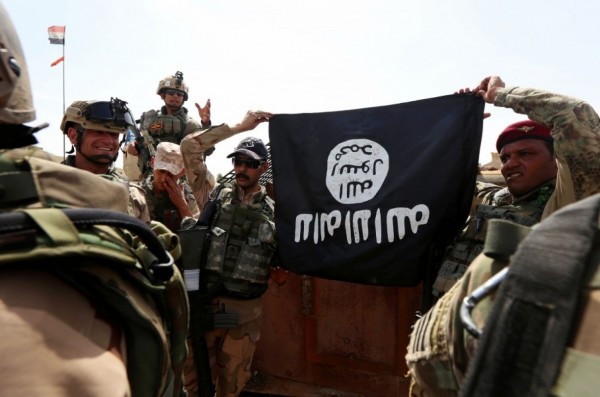 Iraqi soldiers show a flag that they seized from the Islamic State, near the front line, in the town of Kharbardan. (Safin Hamed/AFP/Getty Images)
Share:
The base salary offered to the worker named al-Jiburi was a pittance, just $50 a month. But even the cash-challenged Islamic State knew it had to do more to sustain the loyalty of a man with nine mouths to feed.

A crinkled wage voucher breaks it down by family member: For each of his two wives, al-Jiburi would receive an extra $50. For each of his six children under age 15, he would get another $35. Any “female captive”— sex slave — would entitle him to an additional $50. For al-Jiburi, described in the document as a service worker for the terrorist group, the monthly total came to $360, payable in U.S. greenbacks.

Salary details and other minutiae of life in the Islamic State are contained in a series of unusual documents released Friday by a scholarly journal. The records, all official documents from inside the group’s self-declared caliphate, collectively reinforce the prevailing impression of an organization under strain, struggling to compensate its fighters and workers, and forced to ration electricity, fuel and other resources.

While defectors and refugees also have described deteriorating conditions in the Islamic State’s territory, the official documents offer a more authoritative account of how the terrorist group is coping after months of aerial bombings and a string of military defeats on the ground, said Aymenn Jawad al-Tamimi, a British scholar who obtained the papers.

“The documentary evidence confirms the current coalition approach has brought about significant losses for the Islamic State and put it under pressure on multiple fronts,” al-Tamimi wrote in an essay in the CTC Sentinel, published by the Combating Terrorism Center at West Point, N.Y.

But he also cautioned that “any predictions of the Islamic State’s collapse are premature.”

The salary voucher and most of the other documents in al-Tamimi’s collection are dated within the last six months, and most were obtained in Syrian and Iraqi towns that were recently liberated from the Islamic State’s forces. Several appear to be attempts to address acute shortages of resources, ranging from fuel and food to electric power.

One document, written in October and carrying the insignia of the Islamic State’s regional government in Aleppo, Syria, forbids fighters from using the group’s vehicles except for approved military operations. Some militants were using vehicles for personal reasons, and the unauthorized driving was “causing an unjustified waste” of the governorate’s resources, “reaching the point of forbidden excess,” the document asserts.

“It has therefore been decided to direct all brothers not to use vehicles … except by permission,” it says.

A similar proclamation by the same governorate announces a cutback in electricity, announcing that fighters’ homes would no longer receive around-the-clock power, in order to assure a plentiful supply for military bases.

Still another, posted in January in Mosul, the caliphate’s Iraqi capital, hints at shortages of drugs and medical supplies, caused in part by medical professionals selling their stocks to help finance their flight from the Islamic State. The document forbids all subjects from removing or selling pharmaceuticals or medical equipment without permission.

The salary record obtained by al-Tamimi counters earlier reports about relatively lavish salaries paid by the Islamic State to attract fighters. The document, with a date stamp between January and February of this year, includes a printed matrix used to calculate current pay rates for fighters as well as government employees. It suggests a low base pay for ordinary workers and militia members, with higher wages possible for those with wives and families, or with sex slaves.