‘Putin is smart, but truly an evil man’, says US ex -Secretary of state Madeleine Albright 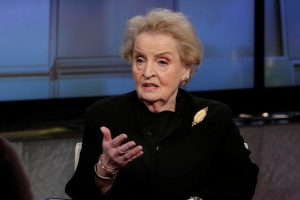 Former U.S. Secretary of State Madeleine Albright in an interview with the Austrian newspaper Die Presse talks about Russia’s return to the world stage, the E.U.’s disintegration and global failure in the refugee crisis.

Madeleine Albright: “We need to see that refugees are people, we need to put ourselves in their shoes and realize how difficult it is for them to leave their own homes to be elsewhere accepted and treated with dignity. We are leading a very nice life. So why not help?”

“The international system has failed in many ways,” Albright continues, commenting on the steps taken to curb the migrant crisis.

“I can’t comprehend it. There is a U.N. High Commissioner for Refugees – and I do not know what went wrong. We have systems that should cope with such a crisis. The international community initially behaved as if the crisis would disappear itself,” she adds.

Asked by journalists about the changes that took place in the world after she left office in 2001, Madeleine Albright said: “The 90s were a remarkable era. After the Berlin Wall fall, Central Europe began to look to the future with great optimism. I am very proud of the NATO expansion. Then we managed to use the power of Western Europe and help the Balkan states.”

“The United States saw its role as an indispensable nation which should do good all over the world. ‘Indispensable’ does not mean that we act alone, but we have to remain internationally engaged. There are two major trends – with positive and negative effects. First, globalization has allowed us to make our ties even stronger, but it is faceless. And that is why many feel like losing their identity, and have begun to cling back to their ethnic, religious or national identity. That’s okay unless we turn our neighbour into an enemy. Nationalism is a very dangerous force. Second, confidence in official institutions fades also as a result of new communication technologies. National governments partially stop to function. What happened with the E.U. is even a greater tragedy.”

Albright sees the problem in a lacking common financial policy for Europe – everyone tries to blame the others when economic difficulties arise.

Commenting on the role of the U.S. as the ‘indispensable nation’, Madeleine Albright points out the formula of the indispensable nation was addressed to Americans so that they understood that the United States cannot keep away from the world. When George W. Bush took office, he wanted to do things differently – which happens often with a change of power in the United States – then came the 9/11 tragedy.

Madeleine Albright: “I have supported the war in Afghanistan with all my heart – the terror attacks were planned there (in Afghanistan). Then the Bush administration forced the intervention in Iraq. That was the greatest disaster. Against this background, Barack Obama became the U.S. president, making pledges to withdraw (forces) from Afghanistan and Iraq. Americans are tired of war. Therefore, following idea is now getting popular – Let the others do more.”

“There are problems in the world, whose solution requires more than just one country. The United States do not want to be the world’s policeman. We are not an imperialist country”, says the politician.

Madeleine Albright agrees with the statement that the Iraqi campaign turned into a failure precisely because it was poorly planned. The same mistake was made in Libya. “No one was prepared for the consequences of the intervention”, Madeleine Albright says, referring to the decisions hastily made.

Commenting on Russia’s reaction towards the U.S., France’s and U.K.’s position regarding Libya, Albright says: “One always looks for excuses for Russia – and I’m fed up with it. Russia is a country that provokes and then feels insulted. Russia has undergone an identity crisis: I’ll never forget a man saying to me, back in the 1990s somewhere near Moscow: “I am ashamed of that. We were a superpower, and now we are Bangladesh with missiles.” Putin took advantage of the situation and declared: “I will lead Russia back its former glory.”

“Putin is smart, but he’s really an evil man. A KGB officer, he wants to keep everything under control and believes that all conspire against Russia. This is not true. Putin had bad cards, but he played with them well. At least, for a short-term period. I think his goal is to undermine and split up the E.U. He wants to drive NATO away from his sphere of influence.”

“Putin is smart, but he’s really an evil man. A KGB officer, he wants to keep everything under control and believes that all conspire against Russia. This is not true. Putin had bad cards, but he played with them well. At least, for a short-term period. I think his goal is to undermine and split up the E.U. He wants to drive NATO away from his sphere of influence.”Said Former U.S. Secretary of State Madeleine Albright.

Albright thinks the Baltic States fear Putin and their fears are justified. “This stems from the method of asymmetric warfare applied by Russians.”

The politician also said that Putin should not have been allowed to get away with annexation of Crimea. Albright links Russia’s economic success in the early 2000s exclusively with oil high prices.

As for Russia’s presence in Syria, the former head of the State Department says: “Putin intervened Syria to divert attention from Ukraine and strengthen his influence in the Middle East again. His main goal was to demonstrate Russia’s power. Yet let me say: the U.S. has no problem with Russia – unless it occupies other countries”.

Madeleine Jana Korbel Albright (born Marie Jana Korbelová) is an American politician and diplomat. She is the first woman to have become the United States Secretary of State. She was nominated by U.S. President Bill Clinton on December 5, 1996, and was unanimously confirmed by a U.S. Senate vote of 99–0. She was sworn in on January 23, 1997.