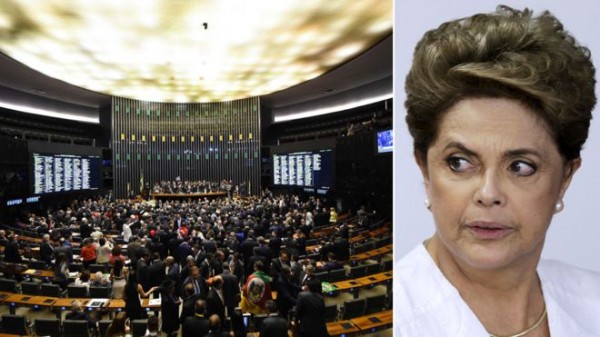 Estimates suggest the vote could be extremely close according to BBC
Share:
Brazilian lawmakers on Sunday are casting votes to decide if President Dilma Rousseff should face an impeachment trial, with arguments between rival camps in and outside of Congress taking on an increasingly bitter tone.

Emotions have been running high since the impeachment proceedings began in the lower house on Friday, with MP’s going so far as to accuse each other of being “thieves” and “coup-plotters”.

Meanwhile, the unprecedented levels of vitriol between pro- and anti-impeachment demonstrators rallying outside government buildings in the capital have sparked fears of violent clashes, resulting in a metal wall being installed to keep the opposing sides safely apart.

If 342 of the lower house’s 513 lawmakers vote in favour of the impeachment on Sunday, the proceedings move to the Senate, where a separate vote could suspend Rousseff and hand over the top job to Vice President Michel Temer.

Rousseff herself has blasted Temer as a “traitor” for what she claims is an unconstitutional bid to oust her.

Brazilian newspapers have been updating tallies of which lawmakers will vote in favour of her impeachment and who will vote against non-stop. The result appears to hang on the votes of a couple of dozen undecided MPs.

Tompsett said that over the past two days, Rousseff had cancelled two separate public appearances to, “instead receive key politicians and party leaders at her official residence in a last ditch effort to recapture some of the support she’s lost”.

If lawmakers vote for impeachment, the Senate will then be asked to examine the motion. But if the motion fails to get the support of at least 342 lawmakers, the bid to oust Rousseff will be dead in the water.

Brazil’s first ever woman president is facing impeachment over allegations she broke fiscal laws to better her chances of re-election in 2014. She denies wrongdoing, arguing that all her predecessors have used the same accounting techniques.

So far Rousseff has not been implicated in the massive corruption scheme centered at state-owned oil giant Petrobras, but is facing popular discontent amid a shrinking economy and inflation hovering around 10 percent.

As Rousseff’s impeachment has gone from a remote to a concrete possibility, concern about her potential replacement has grown. There has also been increasing anger over the irony that many of the people pushing to oust her have been accused of even worse corruption.

Temer, a 75-year-old with the Brazilian Democratic Movement – a party bereft of any concrete ideology that has a reputation for backroom wheeling and dealing – has tried to cast himself as a statesman above the fray and a unifying force that can heal a scarred nation.

However, he has also been linked to the Petrobras corruption scandal. Furthermore, because he signed off on some of the questionable accounting maneuvers, Temer could potentially face impeachment proceedings himself.

The second in line to replace Rousseff is Chamber of Deputies Speaker Eduardo Cunha, the driving force behind the impeachment and a long-time Rousseff enemy.

Rousseff this week referred to him as one of “two leaders of the coup” which she says is unfolding against her.

What’s the alternative to Rousseff?

Cunha is a sharp political operator and has carved out a profile with the growing Evangelical Christian wing in Congress, promoting conservative social agendas including “Heterosexual Pride Day” and restrictions on abortion.

But Cunha is facing money laundering and other charges for allegedly accepting some $5 million in kickbacks in connection with the Petrobras scandal and could also be stripped of his mandate over allegations he lied when he told a congressional committee he didn’t hold any foreign bank accounts.

Documents have in fact revealed he and his family had undeclared bank accounts in Switzerland.

More than half the 65 members of the committee in the lower house that endorsed the impeachment are also facing corruption and other charges, as are some 60 percent of the country’s 594 members of Congress.

Under the special legal status afforded to Brazilian legislators and other top politicians, they must be tried by the Supreme Court, largely shielding them from prosecutions.