Pope calls for compassion for refugees, takes three Syrian families back to Italy 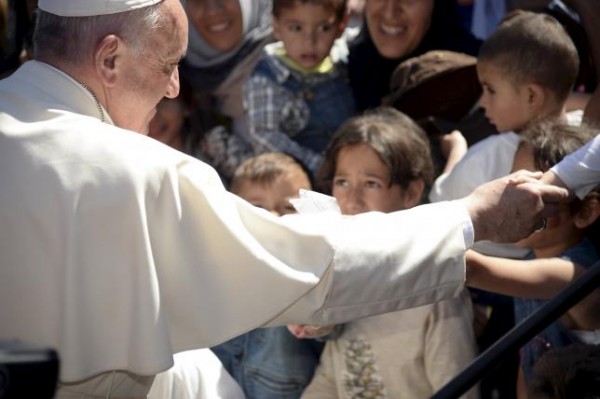 Pope Francis greets migrants and refugees at the Moria refugee camp near the port of Mytilene, on the Greek island of Lesbos, April 16, 2016. REUTERS/Filippo Monteforte/Pool
Share:

Pope Francis on Saturday took three refugee families back with him on his plane to Rome following an emotional and provocative visit to the Greek island of Lesbos that seemed designed to prick Europe’s conscience over its treatment of refugees.

The pope boarded his Alitalia jet along with 12 Syrians from three families, all of whom had had their houses bombed and are seeking refuge in Europe, according to Vatican spokesman the Rev. Thomas Rosica. There were six children among them. Rosica said the families would be cared for at the Vatican.

The dramatic gesture by the pope came at the end of a highly symbolic visit to Lesbos, an island that has been the first port of call for hundreds of thousands of people seeking sanctuary in Europe over the past year as they fled war, oppression and poverty in Asia, Africa and the Middle East. But in the past two weeks, it also has been the scene of hundreds of deportations under a new plan by which Europe sends back those who reach its shores.

The centerpiece of Francis’s five-hour visit Saturday was a visit to the Moria detention facility, where he sat down for lunch with some of the 3,060 men, women and children who arrived on this sun-splashed beach of Europe harboring a dream that was shattered almost as soon as they made landfall. By crossing the barbed-wire threshold that walls the residents of Moria off from the world, the pope presented European leaders with an unmistakable moral challenge.

As Francis made his way through the facility, several people knelt at his feet, weeping uncontrollably.

“They’re looking for your mercy,” a translator told the pope.

Periodic chants of “Freedom! Freedom!” broke out in the crowd, punctuated by the cries of babies and young children.

“We hope that the world will heed these scenes of tragic and, indeed, desperate need,” Francis later told hundreds of migrants who had gathered beneath a plastic, pre-fabricated tent to hear him speak. He had come, he said, to tell the Moria residents that “you are not alone.”

He also called on “all our brothers and sisters on this continent, like the Good Samaritan to come to your aid.”

Later, in a ceremony in the main port of Lesbos, Francis urged the world to resist the temptation to build walls. “Barriers create divisions instead of promoting the true progress of peoples,” he said.

The surprise ending to the visit — with Francis flying off into a clear blue sky with refugees aboard his plane — came out as a result of negotiation between the Vatican, Italian and Greek authorities, according to a Vatican statement.

All 12 of those who traveled with the pope are Muslims, the Vatican said. Two of the families are from Damascus, and one is from Deir al-Zour in an area of Syria controlled by the Islamic State. The Vatican said the families had arrived in Greece before the European Union’s plan to deport people back to Turkey took effect.

Boris Cheshirkov, spokesman for the United Nations’ refugee agency, UNHCR, said the decision by the pope to take refugees with him was “a gesture of solidarity and a humanitarian act.”

Upon greeting Francis at the airport, Greek Prime Minister Alexis Tsipras called his visit “historic,” saying that it came at a time when “some of our partners — even in the name of Christian Europe — were erecting walls and fences to prevent defenseless people from seeking a better life.”

When the pope arrived at the detention facility, which human rights advocates say is overcrowded and understaffed by asylum officers, he was given a hero’s welcome, with people cheering, clapping and whistling as he shook hands one by one with residents who had lined up to greet him. Many held signs praising Francis and pleading for his help.

“Welcome to Moria,” many people told him as they clasped his hand. The pope smiled broadly in reply.

As he made his way through the camp — surrounded by high fences and patrolled by police — kids handed him their drawings. He complimented them on their artistry.

“Don’t fold it. I want it on my desk,” he told a young girl. When greeting observant Muslim women, scarves pulled over their hair, he placed his hand atop his heart and gently bowed.

For those being held at the facility, their experience of Europe has been defined by confinement. Instead of earning passage to a new, better life, they were locked up. Rather than finding a permanent home in a safe country, they were told they would soon be sent back to the instability and violence of where they started.

Detainees said in the lead-up to the pope’s visit that they believed his arrival could give them one last shot at reprieve.

“If the governments of Europe respect the pope, they will listen,” said Abdul Hadi, an 18-year-old Afghan who spoke to a reporter from behind the facility’s imposingly high fences as friends kept a wary eye out for police. “They will stop deporting refugees.”

It is far from clear that European leaders, satisfied by the falling arrival numbers that their policy has generated, will respond to the pope’s attempts at persuasion.

But by visiting Moria, and by breaking bread with people Europe is threatening to deport, the leader of the Catholic Church will be making his strongest statement yet on migrant rights, an issue he has made one of the biggest focuses of his revolutionary tenure.

“He is convinced that the mass displacement of people at this time is the most important moral choice facing Western countries,” said Francis biographer Austen Ivereigh. “Will we embrace the stranger in need or build new iron curtains? Will we offer migrants a new home or send them into the arms of the mafias and death at sea?”

In official visits, from Mexico to southern Italy, Francis has championed immigrants and migrants, calling the need to aid them, no matter their faith, a duty of all Christians. As recently as last month, even as Europe was closing its door, he seemed to make a political statement by washing the feet of migrants during Holy Week celebrations.

On Saturday, the pope had the chance to speak out against Europe’s policies from the very harbor where people are being deported. He did so even as an epic debate continues to roil the continent: What do you do about the historic number of people displaced by conflict, more than a million of whom sought sanctuary in Europe last year?

About half came through this Aegean island, Lesbos, on their way to points farther north. But last month, Europe abruptly shut down the pipeline, announcing that not only would people be barred from traveling onward from Greece, but all new arrivals would also be shipped back to Turkey.

Last week, Europe made good on its threat, sending 325 people back across the sea — despite protestations from human rights groups, and from Francis.

Europe’s leaders have shown little interest in reversing course. European Council President Donald Tusk acknowledged this week that he had “doubts of an ethical nature” about the deportation plan but defended it as necessary “to prevent political catastrophes.”

In January alone, he noted, there had been 70,000 new arrivals — a pace that has dropped precipitously since Europe began to block the path. “How many more would have come in April if we had not taken action?” he asked.

But rights advocates say it is disgraceful that Europe is turning away people in obvious need of protection, and they hope Francis’s visit can begin a reconsideration.

“This visit is an opportunity for Europe to come together and share the responsibility instead of leaving Greece to handle it on its own,” said Cheshirkov, the Lesbos-based UNHCR spokesman. “It’s also a chance to remember what our values should be. At a time when xenophobia is on the rise, we should remind ourselves that Europe is built on human rights, tolerance and diversity.”

Lesbos will give Francis a nearly ideal opportunity to deliver that message. Even as other, less-affected parts of Europe have shunned refugees, island residents have been consistently welcoming. That is despite the fact that the monthly arrival totals last fall occasionally surpassed the island’s entire population.

As the boats glided into shore by the dozens last year, residents waded into the surf to carry out rescues, offered new arrivals shelter in their homes and drove families across the island’s rugged interior to save them days of walking.

Residents say their compassion and empathy come naturally — many are descended from people who fled Turkey in the 1920s.

“These are the sons and ­daughters of refugees,” said ­Father Leon Kiskinis, the priest at Lesbos’s only Catholic church, a cramped but ornately decorated ­19th-century building that with six wooden pews can nearly accommodate all 300 of the island’s Catholics. “Seeing these people now, it is the same pain, the same desperation. It’s the same story, repeated now.”

Most island residents are ­Orthodox, not Catholic. In a sign of another major Francis initiative — reconciliation within the Christian faith — the pope was accompanied Saturday by Ecumenical Patriarch Bartholomew I, the spiritual leader of the world’s Orthodox Christians, as well as by Greek Archbishop Ieronymos.

In remarks to the migrants at Moria, Ieronymos denounced the “bankruptcy” of European policies that “have brought these people to this impasse.”

Bartholomew vowed to “do everything to open the eyes and hearts of the world.”

In addition to eating lunch with the migrants at Moria, Francis led a public prayer in the island’s main harbor, and publicly thanked Lesbos residents for their hospitality. He and his fellow religious leaders also dropped laurel wreathes in the sea as a memorial to those who have died making the perilous crossing.

In many respects, the Lesbos trip is part of a legacy in the making, further evidence that the pontiff is seeking to define his papacy on the issues of inequality, mercy and migrant rights.

In his first official trip as pontiff, in 2013, Francis highlighted the plight of refugees by hopping on a flight to the Italian island of Lampedusa. Back then, at the early stages of the migrant crisis, Italy was the primary entry point for migrants funneling into Europe. Shortly before his trip, a horrific shipwreck off the Libyan coast had left hundreds dead.

Last year, as the crisis escalated and the entry point shifted from Italy to Greece, Francis issued dramatic appeals to Europe’s Catholics, asking every parish, religious community, monastery and sanctuary to take in one refugee family. His call came as some of the region’s leaders, including Hungary’s Viktor Orban, were warning that waves of mostly Muslim refugees would change the face of “Christian” Europe.

“Facing the tragedy of tens of thousands of refugees — fleeing death by war and famine and journeying towards the hope of life — the Gospel calls, asking of us to be close to the smallest and forsaken. To give them a concrete hope,” Francis said.

Papal watchers said the pope’s Lesbos visit will offer a clear message to Europe and its leaders, one they may not welcome.

“Expect the usual bluster about the pope being naive and how each country has to decide what’s in its best interest,” Ivereigh said. “But most people will know he’s right and that Europeans will look back on this episode with deep shame. We didn’t take the Jews in 1930s Europe because they were too many and too different; now we refuse to take Muslims for the same reason. It takes the pope to point that out.”