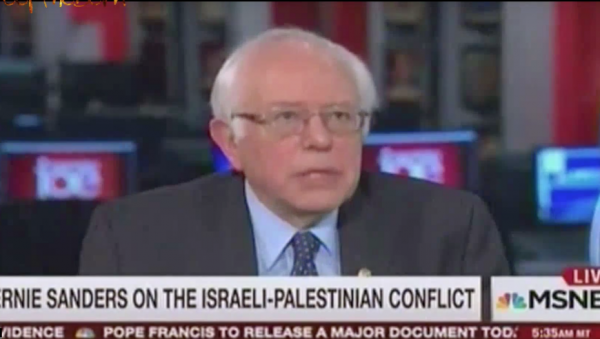 Bernie Sanders is taking a sledgehammer to the political status quo on Israel.

Sanders refused to back down Thursday night from his claim that Israel in 2014 used “disproportionate” force to respond to Hamas rocket fire from Gaza while calling for the United States to stop being “one-sided” in the conflict there. In doing so, he upended a long-standing tenet of American politics: that unflinching support for Israel is non-negotiable.

Sanders’ unorthodox remarks at CNN’s Democratic debate came just days before voters head to the polls in New York, where Sanders is fighting to narrow the significant, but not insurmountable, deficit he faces against former New York Sen. Hillary Clinton.

The Empire State’s 19.79 million residents include the country’s largest Jewish population — some 1.8 million of the country’s 6.8 million Jews live there, according to the 2014 American Jewish Year Book — and one of the most active pro-Israel constituencies.

Sanders’ nationally televised stance could represent a watershed moment in Democratic politics, as the sole Jewish candidate in the race — and only one to have lived in Israel — smashed a taboo that could lead others to follow suit.

Indeed, a potential shift in the party’s position on the Israeli-Palestinian conflict has long been brewing, with signs of ferment bubbling to the surface in recent years amid the rancorous relationship between President Barack Obama and Israeli Prime Minister Benjamin Netanyahu.

“It’s not just that it was interesting politics in New York. It’s that I’ve never seen a Democratic candidate trying to be president — I haven’t seen a Republican, I haven’t seen anyone at this level of the game — say, ‘Look, let’s have a more balanced approach,” Jones said. “That takes a level of courage and a level of integrity. You can disagree with it, you can feel badly about it, you can be proud of it — but something happened tonight.”

Sanders was asked about Israel at the debate after he erroneously told the New York Daily News earlier this month that Israel has killed 10,000 civilians in Gaza — drawing fire from top Jewish groups including the Anti-Defamation League. Sanders later revised the figure to 10,000 wounded civilians and 1,500 deaths.

Clinton, for her part, diligently asserted the traditional pro-Israel views that have helped make her a favorite of Israel advocates and Jewish leaders in New York.

At several points the audience at the debate responded enthusiastically to Sanders’ comments on Palestinians and often gave Clinton a more lukewarm response. And polling shows that Democratic support for Israel is dropping, particularly when compared to Republicans.

A Gallup poll in 2015 found that 60% of Democrats viewed Israel favorably, down from 74% the year before. The poll found 48% of Democrats sympathize more with Israelis than Palestinians, as opposed to 83% of Republicans.

Steven Cohen, a Hebrew Union College professor who has studied the evolution of Jewish American views on Israel, said Sanders’ views will resonate with the majority of American Jews, who are broadly Democratic and secular, and with young ones in particular.

“They are pro-Israel but they are anti-settlements. They lack confidence in the sincerity of the Israeli government in pursuing peace,” Cohen said. “The Democratic Party is changing. Younger Democrats are still pro-Israel, but they’re opposed to many Israeli policies.”

It’s a shift Sanders is clearly conscious of. He not only defended his remarks about the “disproportionate” military response but challenged Clinton to address the claim directly.

“You evaded the question,” Sanders told Clinton, pushing her to defend Israel’s actions. He also took her to task for not addressing the Palestinians’ plight at greater length during her recent speech to the American Israel Public Affairs Committee, one of the country’s largest pro-Israel lobbies.

Sanders’ spokeswoman Symone Sanders said Friday the campaign is “not worried” about any backlash from the candidate’s stance.
“This is the kind of approach we have to take in order to make inroads in the Israeli and Palestinian relationship,” she said.

Cohen, who endorsed Sanders on Friday, called the Vermont Democrat’s focus on Palestinian rights during a presidential debate “historic.” But he predicted that the debate would have only a “small effect” on the New York primary — with voters for whom U.S.-Israel relations is a priority having mostly made up their minds.

Hank Sheinkopf, a veteran Democratic strategist who said he’s known Clinton for more than three decades, agreed that Sanders’ views are likely to resonate more with younger voters. Their turnout is crucial for helping Sanders counter the former secretary of state’s support from older New York voters, who are a more reliable voting bloc.

Regardless of the debate’s impact on the primary, Sanders managed to put down a new marker in the ongoing debate over support for Israel in Democratic Party politics.

“It’s a pretty extraordinary moment for Democrats,” Sheinkopf said. “It signals without question what other people already know: that the great love affair between the United States and Israel is over and that the U.S. and Israel are entering two different eras. If it’s President Bernie Sanders, that will certainly be the truth.”

Sheinkopf added, “There is no requirement anymore in Democratic politics to have a strict, orthodox pro-Israel position.”

Still, Jewish leaders who continue to advocate for preserving the status quo of the strong U.S.-Israel relationship insist that support for Israel remains deeply embedded in American politics — in both parties.

“I think that overall the American people’s support for Israel is not diminished,” said Malcolm Hoenlein, executive vice chairman of the Conference of Presidents of Major American Jewish Organizations.

He conceded, though, that “there is a weakness on the Democratic left” in terms of support for Israel. It’s a shift he attributes to “a lot of disinformation and misinformation” on Israel, something Hoenlein said Sanders fed into with his erroneous statement about 10,000 civilian casualties.

“This, then, becomes embedded in political discourse as a fact really rather than a baseless assertion,” Hoenlein said. “That is where the young people then get misled.”

Sanders’ position on Israel represents a significant departure from the views top Jewish leaders like Hoenlein are advocating, but the senator also indicated Thursday that he was not making a complete break with the pro-Israel establishment.

His campaign suspended its newly hired Jewish outreach coordinator after Facebook posts in which she used expletives to describe Netanyahu, whom she accused of sanctioning “the murder” of thousands of Palestinians and continuing the “brutal military occupation of millions more.”

Sanders also took pains at the debate to characterize his views as supportive of Israel and note his own personal ties to the Jewish state.

“As somebody who spent many months of my life when I was a kid in Israel, who has family in Israel, of course Israel has a right not only to defend themselves, but to live in peace and security without fear of terrorist attack. That is not a debate,” Sanders said, before launching into his criticism of Israel’s military actions in Gaza.