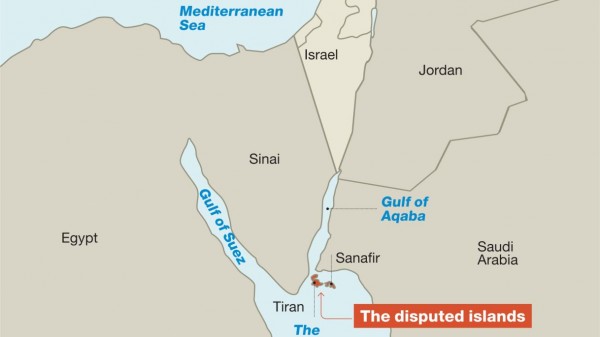 Riot police first cracked down on protesters in Cairo’s twin city of Giza, where demonstrators had gathered at two mosques after Friday prayers and started marching toward Tahrir Square, birthplace of the 2011 uprising that toppled autocrat Hosni Mubarak. Many carried signs reading, “Land is Honor” and denouncing the surrender of the islands. Others chanted, “The people want the fall of the regime” and “Down with military rule!”

More than 80 people were arrested in Cairo, Giza and the Mediterranean port city of Alexandria, security officials said.

All unauthorized demonstrations in Egypt are illegal under a law adopted in late 2013 and security forces have, in the past, used lethal force against peaceful demonstrators. Protesters set April 25 — a holiday marking the restoration of Egyptian control over the Sinai Peninsula after years of Israeli occupation — as a new date for the second wave of protests.

Another demonstration by nearly 2,000 protesters gathered outside the Press Syndicate in downtown Cairo, a few meters away from lines of policemen in full riot gear and backed by armored vehicles who sealed off surrounding streets.

The protesters there chanted, “They sold our lands to the Saudis” and “The islands are Egyptian.”

In some ways, the Cairo downtown protest resembled the atmosphere during the 18-day uprising in 2011 at Tahrir. Some protesters Friday wrapped themselves in Egypt’s black, white and red flags, others wrote on the asphalt “erhal!” or “leave!” Small groups sang patriotic songs and at one point everyone sang the national anthem.

Except for a handful of bearded men and female protesters wearing full-face veils, there was little sign of an organized Islamist presence among the demonstrators. But there were several incidents that underlined tension between secular and Islamist protesters, with one leading to an altercation.

“No matter how bad the Muslim Brotherhood were, they could not be worse than the military and remnants of the Mubarak regime we have now,” said protester Ali Mohiey, a 24-year-old student from Cairo. “Today, there is no Brotherhood or secularists. It’s a day for one people against the sale of our land, oppression and detentions.”

“If we give up the lands now, there will be more future concessions for (el-Sissi) to stay in power,” said another protester, Alaa Morsi, echoing a widely-held notion that el-Sissi essentially bartered Egyptian territory for Saudi financial aid to shore up his rule.

What infuriated many about the islands issue was the secretive nature of the deal as well as its timing. It was announced during a recent visit by King Salman, the Saudi monarch, who pledged billions of dollars of loans and investment to Egypt. Critics and even some former el-Sissi supporters said it was a desperate and humiliating territorial sell-off.

“He should have told us before the deal,” said 28-year-old lawyer and protester Rania Rafaat, who was carrying a banner that read, “el-Sissi sold his land, leave.”

El-Sissi has defended his decision and tried to defuse the outcry.

“We did not surrender our rights, but we restored the rights of others,” he said on Wednesday. “Egypt did not relinquish even a grain of sand.”

The government insists the islands of Tiran and Sanafir off the southern coast of Egypt’s Sinai at the mouth of the Gulf of Aqaba belong to Saudi Arabia, which asked Egypt in 1950 to protect them from Israel. Israel captured the islands in the 1967 Middle East war, but handed them back to Egypt under their 1979 peace treaty.

In response, Egyptians have taken to social networking sites, posting old maps to prove Egypt’s ownership of the islands.

Though relatively small in number, Friday’s protests come at a time of public tension and tight security, underscoring increasing public discontent over el-Sissi’s 22-month rule. In July 2013, as army chief, he led the ouster of Mohammed Morsi following mass protests against the Islamist president’s rule. El-Sissi followed up with a crackdown on Islamists in which thousands have been jailed and hundreds killed in street clashes with police.

Egypt has been roiled by unrest since the 2011 uprising toppled Mubarak’s authoritarian regime. Following his ouster of Morsi, el-Sissi was hailed as the country’s savior. But the general-turned-politician now faces a series of crises, including a surging Islamic insurgency in Sinai, an ailing economy, as well as deeply disenchanted youth and democracy advocates who see him as another version of Mubarak.

El-Sissi still retains a large base of support among Egyptians who fear for their security, and see him as the only protection against an Islamist takeover or state disintegration. At a small rally Friday in Alexandria, dozens of supporters carried posters with photographs of the president and chanted, “We love you, el- Sissi!”

The calls for the Friday protests in Cairo prompted the Interior Ministry to beef up security in Tahrir Square, shutting down the subway station there and positioning dozens of police vehicles mounted by masked riot police.

Earlier, the state MENA news agency quoted an unnamed ministry official as saying police were “encircling” strategic routes into the capital. The precautions, he said, would prevent “infiltration of the terrorist group” bent on causing chaos — a reference to Morsi’s Brotherhood.