Syrian opposition will join with government in transitional body, but not with Assad 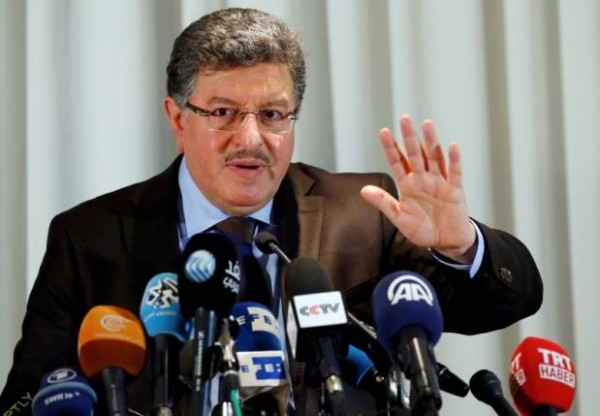 Syria’s main opposition group is willing to share membership of a transitional governing body with current members of the government of President Bashar al-Assad, but not with Assad himself, the group’s spokesman said in Geneva.

“There are many people on the other side who we can really deal with,” Salim al-Muslat, spokesman for the High Negotiations Committee, said on the second day of a round of U.N.-mediated peace talks.

U.N. mediator Staffan de Mistura has said a political transition would be the main focus of the current round of the peace talks, which aim to end Syria’s five-year-old war. More than 250,000 people have been killed in the conflict.

The HNC has always insisted that there can be no place for Assad in a transitional governing body but Muslat said there was room for negotiation on how to handle Assad’s departure.

Before the first round of talks, Damascus had ruled out any discussion of the presidency. There was no immediate indication it was ready to change its mind now.

A U.N. resolution governing the talks says the transitional governing body will have full executive powers. Muslat said the body would call for a national conference which would in turn form a constitutional committee.

The HNC was willing to take less than half of the seats on the transitional body, as long as it satisfied Syrians and brought a political solution, he said.

“Even if we only take 25 percent, believe me, 100 percent would be the Syrian people.”

If Syria’s ally Russia was willing to put pressure on the Damascus government, and if the government delegation was serious about negotiation, then a deal could be done in the current round of talks, he said.

“For a solution, to really help Syria to get relief, then let them suggest what they want for Assad and we discuss it. There is a table here in the United Nations building and we can sit and discuss all these things, we are ready to discuss these things.”

The peace process has brought a truce and a humanitarian aid effort but no progress on agreeing prisoner releases.

Muslat said the HNC had lists of 150,000 people held by the government, including women and children. He did not know the number held by opposition groups but said they were well treated.

“Believe me, the minute we see a positive step, we can talk to the factions there and whatever they have is released. I’m against holding hostages whether on this side or that side. But there are talks there and they are willing to free what they have in their hands.”

Opposition factions had also talked about uniting to fight hardline Islamist militants once a political solution was in place, all Syrians would be able to unite behind a single army, “whether they were with Assad or on the other side”, he said.

“When there is no Assad in Syria, the army will be one, it will be from the opposition, it will be from people who were with Assad, it will be Kurds, also Christians and Muslims fighting terrorism, because this is the future of Syria.”