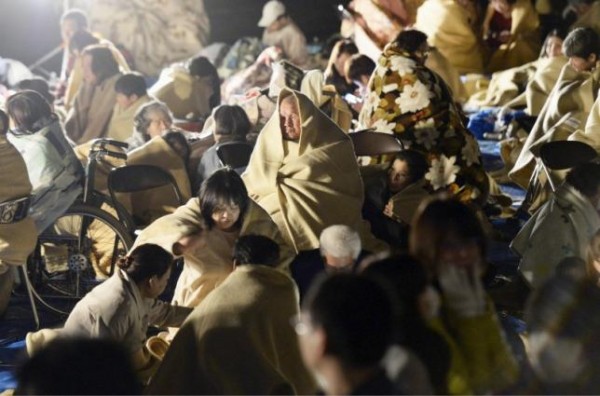 Local residents wrap themselves in blankets as they sit on the road in front of the town office building after an earthquake in Mashiki town, Kumamoto prefecture, southern Japan, in this photo taken by Kyodo April 15, 2016. Mandatory credit REUTERS/Kyodo
Share:

An earthquake of magnitude 6 hit southwestern Japan on Thursday, bringing down some buildings and injuring dozens of people, local media reported, but the nuclear regulator reported no problems at power plants.

The initial quake struck 11 km (7 miles) east of the city of Kumamoto, the U.S. Geological Survey (USGS) reported. It said the magnitude was 6.2 but later revised it down. Japanese public broadcaster NHK said the quake registered 6.4.

There was no tsunami warning, but Japan’s chief government spokesman, Yoshihide Suga, said several buildings had collapsed. He gave no more details.

“We intend to do the utmost to grasp the situation,” Prime Minister Shinzo Abe told reporters. “I’m now planning to hear what we have gathered on the situation.”

The Kyodo news agency reported that around 40 people were being treated at a hospital in Kumamoto city, some of them seriously injured.

A fire also broke out in Mashiki, a town of about 34,000 people near the epicenter of the quake. NHK showed footage of firefighters tackling a blaze at a building.

Some 16,000 households in the area were without electricity and 38,000 homes had no gas supplies in Kumamoto, Japanese media reported.

At around 1503 GMT, another tremor struck the region, according to the USGS. It was initially measured at magnitude 6.4, before being revised down to 5.9. Again, there was no tsunami warning.

After the first tremor, the Nuclear Regulation Authority said there were no irregularities at three nuclear plants on the southernmost island of Kyushu and nearby Shikoku.

Some high-speed trains were halted as a precaution.

Japanese media showed watermelons falling from shelves at a supermarket in Kumamoto.

A quake of magnitude 9 struck offshore north of Tokyo in March 2011, causing tsunami waves along the coast which killed nearly 20,000 people and triggered a meltdown at a nuclear power plant.