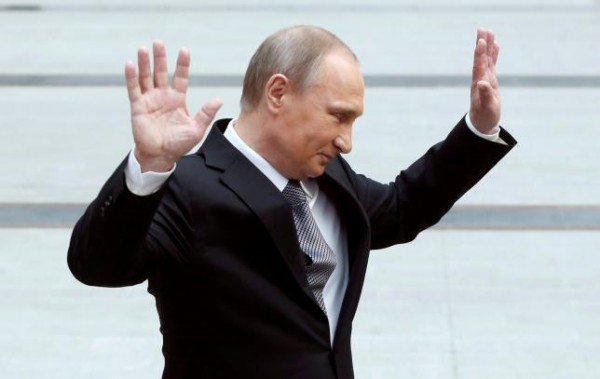 Vladimir Putin on Thursday dismissed media reports that billions of dollars in Panama offshore accounts might be linked to him as a U.S.-backed “provocation”, as he told ordinary Russians that the country’s economic crisis will ease next year.

The leak of confidential documents from a Panamanian law firm earlier this month has angered the Kremlin, forcing it to field questions about offshore accounts allegedly belonging to one of Putin’s best friends.

Speaking during a televised national phone-in, Putin dismissed the leak and subsequent media reports as part of a shadowy U.S.-backed plot designed to discredit Russian politicians ahead of parliamentary elections later this year.

“They must understand that the issue is not about specific people, individuals, no matter what position they hold in Russia,” said Putin, after lashing out at U.S. officials and U.S. bank Goldman Sachs.

“The issue is about the country, which cannot be manipulated.”

Putin delivered a spirited defense of his friend Sergei Roldugin, who, according to reports based on the Panama Papers, has a business empire involved in offshore transactions that might be linked to Putin.

“Who does it, these provocations? We know that there are some staff from official American institutions,” said Putin.

He cast himself and the ruling United Russia party as an anchor of stability at a time when the economy is shrinking and the financial knock-on effects of Russia’s stand-off with the West are still being felt.

With real incomes down and people worried about high food inflation, unpaid wages, and corrupt officials, Putin adopted a father-of-the-nation stance, letting people know he understood that many, especially in the regions, were suffering but that economic growth would return next year.

Addressing public concerns over the economy is crucial for the Kremlin ahead of a parliamentary election in September and it is carefully monitoring the regions for any signs of social unrest. Thursday’s event provided a controlled platform for people to let off steam and feel listened to.

Wrapping up the event after three hours and 40 minutes, Putin said he had heard a lot of impassioned questions from worried citizens.

“I share your concerns in nearly 100 percent of cases,” he said. “We’ll work together so that your problems are relieved.”

Putin took questions via video link from two women, Tatiana and Yelena, who said they had not been paid for months of work at a fish processing plant on a Pacific island, and that officials had ignored their complaints.

The issue is a widespread one since Russia’s economy slowed, with businesses that are struggling with falling sales often delaying wages.

The Russian president, live on air, instructed his prosecutor-general to think about firing the local prosecutor for failing to act on the women’s complaints.

“I want to extend my apologies and assure you we will do everything to resolve the situation,” Putin said. Within hours, it was announced a senior prosecutor would travel to the fish processing plant on Friday to find out what was going on.

Putin was less decisive when it came to asking questions about his personal life, saying only that one day he might tell the Russian people if he is in a romantic relationship.

Since he divorced his wife Ludmila in 2013, rumors have swirled, with one Russian newspaper report saying he was in a relationship with Alina Kabaeva, a former Olympic gymnast, an assertion Putin rejected.

When asked on Thursday if he was going to re-marry, Putin said: “Maybe one day I will be able to satisfy your curiosity.”

On foreign policy, Putin did not deploy the kind of bellicose rhetoric against the United States and its allies that he has in the past few years, limiting himself to saying only that he thought Barack Obama had not learnt the lessons of Iraq when it came to handling Libya.

Putin denied that Russia was surrounded by adversaries, said he favored a peaceful resolution of the conflict in Syria, and said Russia wanted good ties with Turkey and Ukraine, with which relations have soured.

He said he did not expect that Western countries would in the near future lift the sanctions imposed over Russia’s annexation of Crimea and its support for separatists in eastern Ukraine. But he said Russia’s economy would adapt.

Direct criticism of Putin during the phone-in was absent. Executives at state television channels, which are deferential to the Kremlin, controlled who had the chance to pose questions. His critics say the phone-in is a ritual designed to mask the lack of true democracy.

Direct criticism of Putin during the phone-in was absent. Executives at state television channels, which are deferential to the Kremlin, controlled who had the chance to pose questions. His critics say the phone-in is a ritual designed to mask the lack of true democracy.

Putin was asked whether he would stand for re-election in 2018 for what would be his fourth presidential term.

“I think it’s too early to speak about it,” he said.

“We will take the relevant decisions depending on how the situation develops.”