Syrian troops, allies launched an offensive to retake a village south of Aleppo 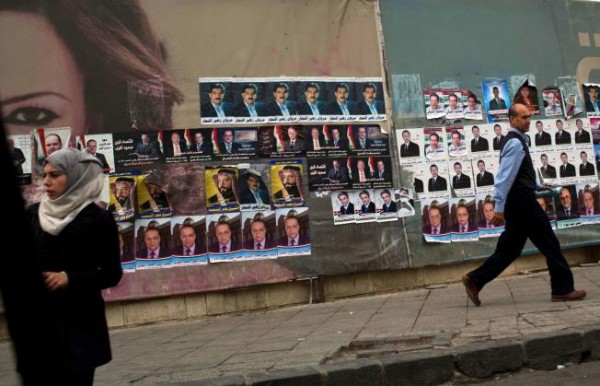 Syrians pass by campaign posters for parliamentary candidates in Damascus, Syria, Tuesday, April 12, 2016. Parliamentary elections will be held in Syria to elect the People’s Council on 13 April 2016. The vote – expected to be a rubber stamp of President Bashar Assad’s loyalists – will only proceed in government-controlled areas as the Damascus authorities are unable to organize any balloting in rebel-controlled areas or the territory under the Islamic State group. (AP Photo/Hassan Ammar)
Share:
Syrian troops and their allies launched an offensive Tuesday to retake an important hilltop village south of the city of Aleppo from militants, including al-Qaida’s local affiliate, as President Bashar Assad’s government was preparing for parliamentary elections the following day.

The vote will only be held in areas controlled by the government, and is expected to produce a rubber-stamp assembly loyal to Assad.

Al-Manar TV, run by Lebanon’s Hezbollah militant group, which is fighting alongside Syrian government forces, reported the offensive to retake the village of Tel al-Ais. The Syrian Observatory for Human Rights, an activist-run monitoring group, said clashes were ongoing around Tel al-Ais and the nearby village of Khan Touman.

Tel al-Ais overlooks a supply line connecting the capital, Damascus, to the northern city of Aleppo, parts of which have been held by groups opposed to the government since 2012. Militants captured Tel al-Ais earlier this month after heavy fighting despite a U.S. and Russian-brokered cease-fire, which excludes the al-Qaida-affiliated Nusra Front.

The fighting comes as U.N. brokered indirect peace talks are set to resume on Wednesday in Geneva. The U.N. envoy for Syria is expected to meet with an umbrella opposition coalition backed by Saudi Arabia, the United States and other Western powers.

The Syrian government says its delegation will arrive in Geneva on Friday, once the balloting in the parliament elections is completed.

In Damascus, streets were festooned with posters of campaigning candidates on the eve of the elections. Voting for parliament is held every four years in Syria.

The overriding theme was the grinding war, now in its sixth year. “Hand in hand, we will rebuild,” said a candidate’s slogan, written in Arabic over his photograph. “For the sake of our children who have died, we will continue,” read another poster.

Around 3,500 government-approved candidates are competing for seats in Syria’s 250-seat parliament, after more than 7,000 others dropped out.

The election, in which soldiers are being allowed to vote for the first time, will be conducted only in areas under government control. Western leaders and members of the opposition have denounced the process as a sham and a provocation that undermines the Geneva peace talks.

The government says the election is constitutional and has nothing to do with a roadmap for peace agreed on by international powers, which envisions free elections in Syria after a new constitution is drawn and a political transition begins.

In Damascus, many residents rejected voices from abroad calling the elections a farce.

“The Syrian people represent themselves, they don’t need anyone from outside to tell them this is right or wrong,” said Mahmoud Hilal, a resident who was visiting Damascus from the eastern, Islamic State-held Deir-el-Zour province.

Samer Dabboura, a Damascus resident, said elections are a national duty for every Syrian. “It’s a duty for me to choose who should represent us in this parliament, because it is our voice. It is not fake or mandatory, or as they say being forced on us.”

Sharif Shehadeh, a member of the current parliament running for re-election, acknowledged that the elections are not perfect or consensual but said those who criticize from abroad have an agenda.

“I’m not saying elections in Syria are like elections in Switzerland but it’s a stage that we must assist in as Syrians to move forward toward the future,” Shehadeh said.

Russia’s Defense Ministry said the Mi-28N helicopter gunship crashed early in the day after completing its mission. It said there was no evidence that it came under fire. The bodies of the pilots were recovered and taken to the Hemeimeem air base on Syria’s coast, the ministry said.

Russia has been carrying out airstrikes since Sept. 30 in support of Syrian government forces. The air campaign has allowed Russia to test some of its latest weapons, including the Mi-28N helicopter.

The crash brings to three the number of aircraft that Russia has now lost in Syria. The two others were a Su-24 bomber that was shot down by a Turkish jet in November and a helicopter sent on a rescue mission, which was hit by ground fire.

In northern Syria, Turkish artillery shelled Islamic State targets in the Syrian town of Azaz from across the border, after rockets fired from Syria struck a Turkish border town, according to Turkey’s state-run Anadolu news agency.

Two rockets landed in the Turkish town of Kilis on Tuesday, wounding at least eight people. At least four other people were wounded in a similar incident on Monday.