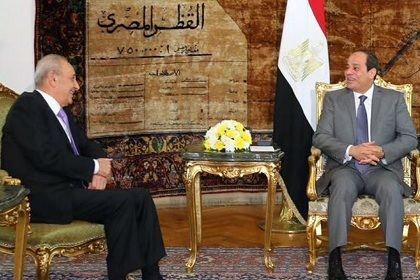 Lebanon Speaker Nabih Berri held talks Tuesday in Cairo with Egyptian President Abdel Fattah al-Sisi on the sidelines of his participation in the works of the 23rd conference of the Arab Inter-parliamentary Union.

“The one-hour meeting tackled the developments, the threats of terrorism and the ties between the two countries,” Lebanon’s National News Agency reported.

Saudi Arabia has suspended a $4 billion aid fund for the Lebanese army and security forces amid a political confrontation with the region’s Shiite powerhouse Iran and its Lebanese proxy Hezbollah.

During Tuesday’s meeting, Berri also stressed to Sisi “the importance of inter-Arab dialogue and rapprochement between Iran and Saudi Arabia which would have a positive impact on the region and Lebanon.”

Sisi for his part expressed his “support for Lebanon and the Lebanese,” underlining that “Egypt does not discriminate between one Lebanese party and another.”

The Egyptian leader also emphasized the need to elect a president in Lebanon, noting that this issue is “more than necessary.”

He also expressed his relief over “the national dialogue among the Lebanese,” noting that it “protects Lebanon.”