After Brussels, expect more bomb-sniffing dogs at US airports and longer security lines 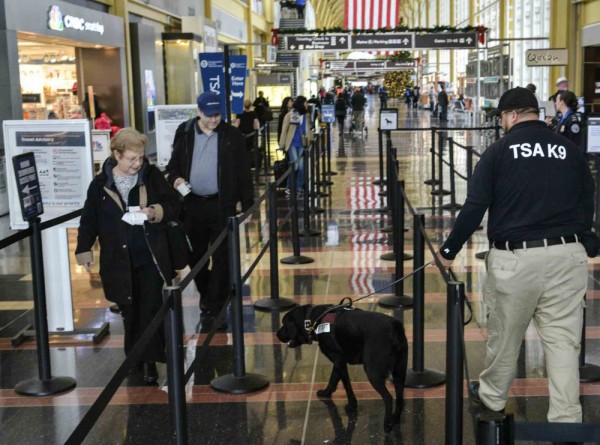 All of the Transportation Security Administration’s bomb-sniffing dogs will be cross-trained to check passenger lines as well as checked luggage, the TSA chief says. Washington Post photo by Jahi Chikwendiu
Share:
Americans who are expected to pass through airports in near record numbers this summer can expect to be sniffed by more dogs, scrutinized by more armed police officers and faced with longer security lines. The reason, in a word: Brussels.

A plane carrying Transportation Security Administration head Peter Neffenger was nosing up to the arrival gate in Brussels on March 22 when the first of two bombs that killed 16 people exploded in the terminal. A third went off a short time later in a subway, killing 16 more people.

“Here’s what we do to make sure that that doesn’t happen here,” said Neffenger, who was arriving in Belgium for a security meeting when the bombs went off. “There’s a lot more patrolling of public areas here than I believe was the case in Brussels. We have explosive-sniffing dogs moving through the fronts of the big airports. And there’s a lot of attention paid to people moving big items through airports.”

Neffenger’s remarks came in a discussion with reporters Friday, two days after a Capitol Hill hearing where he was grilled about airport security by Sen. Bill Nelson, D-Fla., who told him: “The only person that is going to get the airports off their duff to limit the access into their airports is going to be you and your administration.”

The Senate, eager to act after the Brussels bombings, voted Thursday to increase vetting of airport workers, expand the number of TSA viper teams that sweep through airports unannounced to stop and search suspicious people, and to double the number of TSA’s bomb-sniffing dogs.

“There’s some things you have to do after Brussels, and one of them is to realize that public areas of the world are vulnerable, by definition,” Neffenger said Friday. “It helps that we have a vast national intelligence network. I’m comfortable that in the United States in particular, we are doing about as much as we can do to track, to identify and to pay attention to people of concern. If you’ve made a reservation, your name is automatically bounced against data bases.”

He worries that may not be enough to stop a repeat of Brussels on U.S. soil.

“Would that have been enough to have caught that? I can’t say that for certain, but I will tell you that there’s a lot of attention being paid to just that kind of potential happening,” he said.

Neffenger said that people will see a much more visible police presence at airports in the months to come and an increase in bomb-sniffing dogs as rapidly as they can be trained.

He said passengers should expect more random searches both as they enter airports and after they pass through checkpoints into secure boarding areas.

“This is one of the highest volume travel years we’ve ever seen,” he said. “Get to the airports early, because even if I can move you efficiently through the line, you’re still going to find long lines there.”

Neffenger said local law enforcement officers also may conduct random checks of cars and taxis driving toward the airport, a practice already in place at the Los Angeles airport.

“You have to get away from thinking about a perimeter,” he said. “I’m much more interested in thinking about the security environment that is essentially from the moment that you make a reservation to the moment you physically arrive at the airport.”

There have been suggestions that extending the airport perimeter in Brussels might have deterred the bombers, who apparently did not have tickets to board an airplane.

“There’s a psychological aspect to setting a perimeter that says ‘I don’t have to think about something outside the perimeter,’ ” he said. “What you have to think about is a security environment that gets more and more secure as you get closer and closer to the aircraft.”

One step Neffenger took last year already has intensified security closer to the boarding gate. He ended a practice under which passengers in what’s known as a “standard” line at checkpoints were randomly selected to go through an expedited line normally reserved for those who have gone through federal background-check programs like PreCheck or Global Entry. “That was going to cause us some problems,” he acknowledged.

But he says he has an antidote to that problem: more bomb-sniffing dogs working the passenger lines. “Their effectiveness rate, though classified, I will tell you they are the best mobile explosive technology around,” he said.

TSA has 320 trained dogs and local law enforcement agencies have committed almost 700 more to patrol airports. Most of them are trained to detect bombs in checked luggage. Neffenger is having all of the TSA dogs cross-trained so they can work passenger lines.