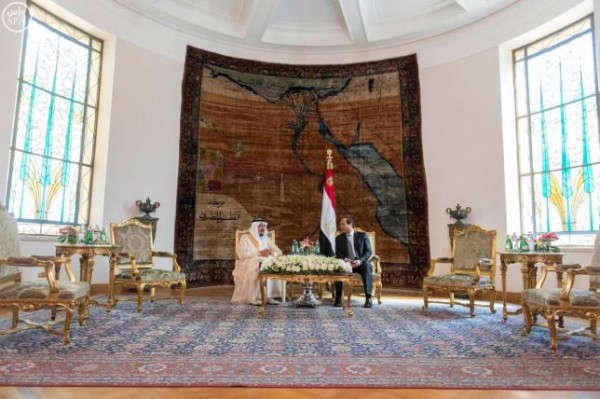 The signing of the agreements took place in Egypt’s Abdeen palace in the presence of Egypt’s President Abdel Fattah al-Sisi and Saudi’s King Salman, during a rare 4-day visit to Egypt.

Egypt has struggled to spur economic growth since the 2011 uprising ushered in political instability that scared off tourists and foreign investors, key sources of foreign currency.

The two countries also signed agreements to develop a 2250 Megawatt electricity plant with a cost of $2.2 billion, set up agriculture complexes in Sinai and develop a canal to transfer water, a statement from the Presidency said.

The statement also said that a company was set up to develop 6 square kilometers of the industrial zone around Egypt’s Suez Canal worth $3.3 billion, without giving further details.

The investments are part of a change in strategy from Saudi Arabia to focus more on financial support that will also benefit Saudi Arabia with return on investment.

Saudi Arabia, along with other Gulf oil producers, has pumped billions of dollars, including grants, into Egypt’s flagging economy since the army toppled President Mohamed Mursi of the Muslim Brotherhood in 2013 after mass protests against his rule.

Some of the projects announced on Saturday include private sector investments. Last week the deputy head of the Saudi-Egyptian Business Council told Reuters that Saudi businessmen are investing around $4 billion in projects in Egypt and have already deposited 10 percent of that sum in Egyptian banks.

On Friday, King Salman announced that a bridge connecting Egypt and Saudi Arabia would be built across the Red Sea. No details were given.

She said the agreements, signed with the Saudi finance minister, covered development in the Sinai peninsula, agriculture, housing and a university.

The agreements also include a memorandum of understanding between Saudi Aramco and Egypt’s Arab Petroleum Pipelines Company SUMED.