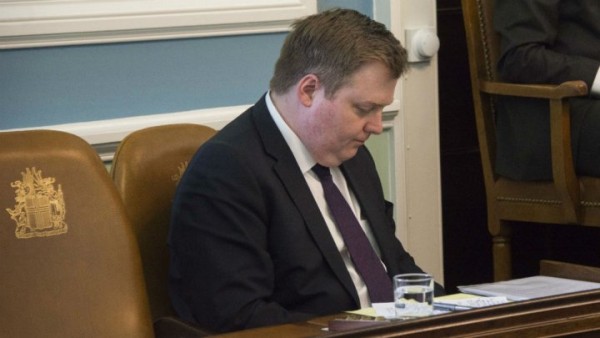 “The prime minister told (his party’s) parliamentary group meeting that he would step down as prime minister and I will take over,” the deputy leader of Iceland’s Progressive party and Agriculture Minister Sigurdur Ingi Johannsson told a live broadcast.

Gunnlaugsson, 41, had been under pressure to resign after the leaked documents revealed that he and his wife Anna Sigurlaug Palsdottir owned an offshore company in the British Virgin Islands and had placed millions of dollars there.

Iceland’s opposition party filed a motion of no-confidence on Monday as thousands of protesters gathered in front of parliament, hurling yogurt, eggs and bananas and demanding the departure of the leader of the centre-right coalition government, in power since 2013.

Almost 28,000 Icelanders, in a country of just 320,000 inhabitants, signed a petition demanding his resignation.

Earlier Tuesday, President Olafur Ragnar Grimsson, who cut short a US visit to return to Reykjavik to deal with the crisis, had refused to grant Gunnlaugsson’s request to dissolve parliament and call new elections.

Gunnlaugsson’s offshore company, named Wintris Inc and acquired in 2007, was intended to manage his wife’s inheritance from her wealthy businessman father, according to the Panama Papers. The prime minister sold his 50-percent share to his wife for a symbolic sum of $1 at the end of 2009.

But when he was elected to parliament for the first time in April 2009, he neglected to mention his stake in his declaration of shareholdings. As he battled to save his political career Monday, he said in a television interview that he regretted not having done so, but insisted he and his wife had followed Icelandic law and paid all their taxes in Iceland.

A government spokesman said the firm owned by the prime minister’s wife held claims against Iceland’s collapsed banks totaling more than 500 million Icelandic crowns (€3.6 million), resulting in allegations of a conflict of interest against Gunnlaugsson.

Iceland’s main commercial banks collapsed as the global financial crisis hit in 2008 and many Icelanders have blamed the North Atlantic island nation’s politicians for not reining in the banks’ debt-fuelled binge and averting the deep recession.