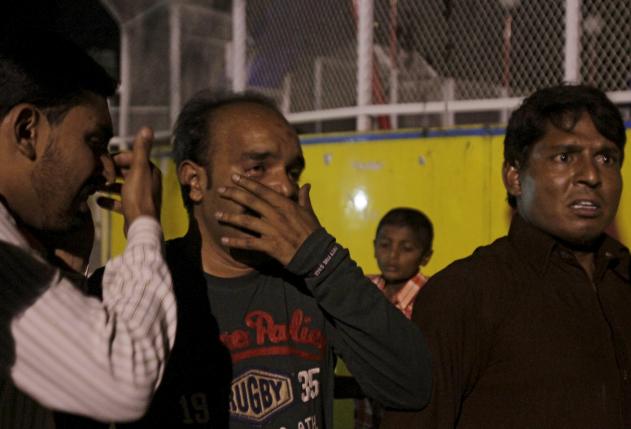 Men mourn the death of their relatives after a blast outside a public park in Lahore, Pakistan, March 27, 2016. REUTERS/Mohsin Raza
Share:
A suicide bomber set off a powerful blast close to a children’s swing set in a public park on Sunday evening in the eastern city of Lahore, killing at least 69 people and wounding around 300, rescue workers and officials said.

The blast occurred in a parking lot at Gulshan-e-Iqbal Park, one of the largest parks in Lahore, said Haider Ashraf, a senior police official in the city. The bomb was detonated within several feet of the swings in a park crowded with families on Easter.

Jamaat-e-Ahrar, a splinter faction of the Pakistani Taliban, claimed responsibility for the blast. Its spokesman, Ehsanullah Ehsan, said in a statement that Christians were the target.

It was the third bombing in Pakistan in this month alone, a reminder that even as the military has cracked down on extremists over the past two years, Islamist groups remain a potent threat.

The bombing came as large protests were held in other parts of the country to protest the execution in February of the man who murdered a secular politician five years ago. While public opinion has largely been galvanized by attacks on civilians by jihadists, particularly the killing of 150 people at a school in Peshawar in 2014, the protests are a sign that widespread sympathy remains for extremist groups in Pakistan.

The Jamaat-e-Ahrar spokesman, Mr. Ehsan, said the bombing “was also to give a message to government that it cannot deter us even in their stronghold, Lahore.” Lahore, the capital of Punjab Province, is the hometown of Pakistan’s prime minister, Nawaz Sharif; his younger brother, Shahbaz Sharif, is the chief minister of the province.

Even though Pakistani officials rebutted the claim that Christians were the target, a large number of Christian families were in the park because of the Easter holiday, the local news media reported. The 67-acre park has walking paths, as well as rides for children.

As the country reeled from this latest spasm of violence, the civilian and military leadership huddled separately to deal with the precipitating sense of crisis. Prime Minister Sharif held a four-hour meeting with his top ministers while Gen. Raheel Sharif, the army chief, directed intelligence agencies to investigate the attack and bring the perpetrators to justice.

Victims described a scene of chaos and devastation soon after the blast.

“I was standing near the roller coaster when the blast occurred,” said a 10-year-old boy who gave his name as Usman Ghani, and who was being treated for minor injuries at Shaikh Zayed Hospital. “I saw fire afterward. There were a lot of people in the park. It was so crowded that people had to break the boundary wall near the gate to cross over and run away.”

“I wish I hadn’t brought my daughter to the park today,” said Kamran Bhatti, 34, a frequent visitor to the park. “This is the only recreation we can afford for her. What is her fault?”

He continued: “While we were running out of the park, my daughter slipped and rolled over. She’s injured, but I thank my God that we are not crying for a lost child.”

His daughter, 7, was being treated for an injury to her leg at Jinnah Hospital on Sunday night.

Yousaf Masih, 50, who said he is Christian, said: “We came to the park after the Easter church services. We brought our food basket along with us, and like the usual outing on our festivals, we were spending our day.”

“There was a lot of rush due to Easter,” Mr. Masih said, adding that “a majority” of the people in that area of the park were Christian. “My children were playing cricket when we heard a huge blast on the main gate of the park. It was mayhem. Everyone was running for their lives. On our way out, we saw the body of the suicide bomber in the parking area.”

Others said security at the park was lax.

“There was no security, as such, at the gates,” said Azhar Shah, 23, a student. “The guard sitting at the main gate was not checking anyone.”

Mr. Ashraf, the police official, said of the park: “It was a soft target. Innocent women and children and visitors from other cities have been targeted.”

The State Department condemned the attack. “Attacks like these only deepen our shared resolve to defeat terrorism around the world, and we will continue to work with our partners in Pakistan and across the region to combat the threat of terrorism,” it said in a statement.

The explosion coincided with violence in other parts of the country as hundreds of protesters took to the streets to condemn the Feb. 29 execution of Malik Mumtaz Hussain Qadri for the 2011 killing of a governor, Salmaan Taseer. Mr. Taseer had campaigned for changes in the country’s blasphemy laws, saying they were used to persecute religious minorities, but to many in Pakistan, the idea of altering the country’s blasphemy laws is itself criminal, and Mr. Qadri has become a revered figure to his supporters.

Protesters clashed throughout the day with police officers in Islamabad, the country’s capital, marching on the main avenues of the city and trying to force their way into the city’s “red zone,” a high-security area that includes the Parliament, the Supreme Court and many diplomatic missions. They set several vehicles, including a fire truck, on fire and damaged public property. The police used tear gas to disperse the protesters, but appeared to be overwhelmed by their numbers. Army troops were called in to secure government buildings.

Pakistan has been shaken by a series of attacks this year. A suicide attack on a court in Peshawar was carried out early this month in retribution for Mr. Qadri’s execution, killing 16. The attack was also claimed by Jamaat-e-Ahrar. Also this month, a bomb left on a bus carrying government employees in Peshawar killed 14.

A state of emergency was imposed on hospitals in Lahore after Sunday’s blast. Private television networks broadcast images of rescue workers and ambulances rushing to the park and ferrying victims to hospitals. Distraught relatives milled about in hospital corridors as the wounded were treated.

“There was no prior intelligence report about the attack,” Muhammad Usman, the district coordination officer in Lahore, told reporters.

Mr. Usman also rebutted early reports that Christians had been targeted in the blast. “The park belongs to all,” he was quoted as saying.

Mr. Sharif, the chief minister of Punjab, announced a three-day period of mourning in the province.