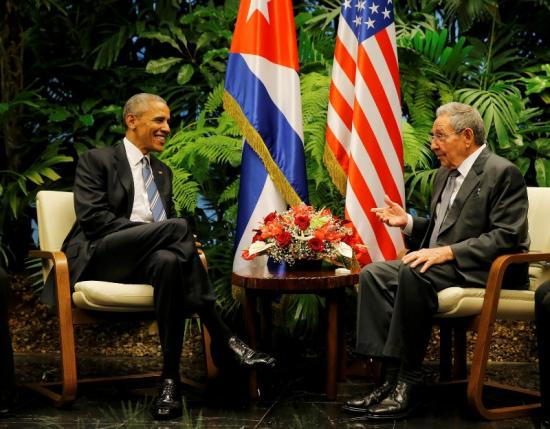 U.S. President Barack Obama pushed Cuba to improve human rights during his historic visit to the Communist-led island on Monday, publicly sparring with President Raul Castro who showed flashes of anger and hit back at U.S. “double standards”.

In a joint news conference that began with jokes but was tense at times, Obama praised Castro for openly discussing their differences but he said a “full flowering” of the relationship would happen only with progress on the issue of rights.

“In the absence of that, I think it will continue to be a very powerful irritant,” Obama said after talks with Castro, in remarks broadcast live on Cuban state television.

“America believes in democracy. We believe that freedom of speech and freedom of assembly and freedom of religion are not just American values but are universal values.”
The Cuban leader countered that no country meets all international rights but appeared uncomfortable as he made the rare step of taking questions from journalists in a country where the media is state controlled.

Obama, the first U.S. president to visit Cuba in 88 years, agreed in 2014 to improve relations with the former Cold War foe but he is under pressure at home to push Castro’s government to allow political dissent and to further open its Soviet-style economy.

Opponents say he has given away too much as he improves ties, with too little from Castro in return, although leading Republican candidate for the Nov. 8 U.S. presidential election, Donald Trump, said on Monday he would likely continue to normalize ties with Cuba if elected.

Castro, an army general who became president when his ailing older brother Fidel retired in 2008, had never before taken questions from foreign reporters on live Cuban television and was clearly irritated when asked about political prisoners in Cuba, demanding the reporter produce a list of those in jail.

Cuba says it has no political prisoners and that the dozens listed by dissident groups are instead common criminals.

Castro said Cuba has a strong record on rights such as health, access to education and women’s equality. His government criticizes the United States on racism, police violence and the use of torture at the Guantanamo Bay naval base in Cuba.

Ben Rhodes, a senior aide to Obama, later insisted that Cuba has political prisoners and said the U.S. government had shared lists of them with Cuba. However, he said that such detentions were now for shorter periods than in the past.

Obama’s ease with reporters’ questions contrasted with Castro’s manner. With American flags hanging in Revolution Palace, the tension was palpable as Castro declined to call on a slew of Cuban journalists who yearned for the rare chance to ask him questions.

Fumbling with a headset providing translation, the 84-year-old leader scolded reporters when he was asked again about rights, saying he agreed to only take one question.

Obama playfully encouraged him to address a second but Castro seemed reluctant as he obliged.

“How many countries comply with all 61 human rights? Do you know? I do. None. None,” Castro said.

In another awkward moment, as the news conference ended, Castro lifted Obama’s arm in the air as if to form a victory salute. Obama resisted, letting his hand hang limp rather than form a fist.

As part of the diplomatic breakthrough in 2014, Cuba released 53 prisoners that the U.S. government considered political prisoners. But the dissident Cuban Commission of Human Rights and National Reconciliation says 79 are still behind bars, among them more than 40 held for peaceful political protest.

“This list is here if they want to see it,” commission leader Elizardo Sanchez said on Monday.

His commission’s list also includes armed anti-government militants, convicted hijackers, army deserters and spies, but Sanchez said they are considered political because they were denied due process.

Castro offered Cuba’s recipe for better relations, saying the United States needs to lift its 54-year-old trade embargo on the island and hand back the Guantanamo Bay base to Cuba.

Obama did not respond to the demand on Guantanamo Bay but said he was optimistic about the elimination of economic sanctions against Cuba.

“The embargo’s going to end. When, I can’t be entirely sure,” Obama said.

Obama has urged Congress to rescind the economic embargo but has been rejected by the Republican leadership. Thwarted so far, Obama has instead used his executive authority to take a series of steps loosening restrictions on trade and travel.

Obama said direct flights from the United States would start this year. He said regular tourism to Cuba could happen “very soon,” in comments to U.S. network ABC.

A clutch of business deals timed to coincide with the visit appeared to show the strategy was bearing commercial fruit, notably U.S. cruise company Carnival’s announcement on Monday that it would sail the first ship from the United States to Cuba in more than 50 years, in a deal that will bring in thousands of U.S. tourists at a time.

About a dozen major U.S. brands have stuck deals or are in talks with Cuba. Ahead of the meeting with Castro, Obama said Google would provide more Wi-Fi and broadband access on the island. Google said later its efforts were in the “early stages.”