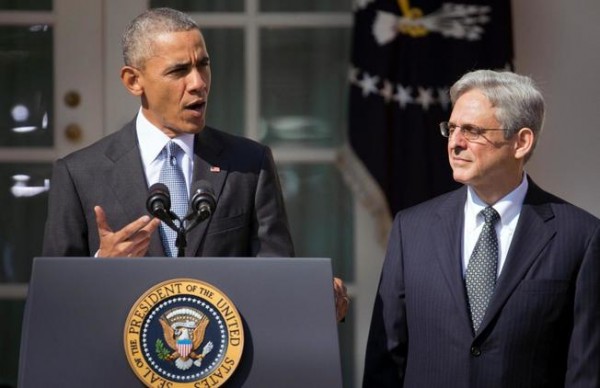 President Obama nominated Merrick Garland to serve on the Supreme Court, setting up a protracted political fight with Republicans who have vowed to block any candidate picked by Obama in his final year in office.
Share:

President Obama on Wednesday nominated Merrick Garland to serve on the Supreme Court, setting up a protracted political fight with Republicans who have vowed to block any candidate picked by Obama in his final year in office.

Garland, 63, is a longtime Washington lawyer and jurist who is chief judge of the U.S. Court of Appeals for the District of Columbia Circuit. Considered a moderate, Garland is widely respected in the D.C. legal community and was a finalist for the first two Supreme Court vacancies Obama filled.

In announcing his choice in the White House Rose Garden, Obama said that he followed “a rigorous and comprehensive process” and that he reached out to members of both parties, legal associations and advocacy groups to gauge opinions from “across the spectrum.”

He said Garland “is widely recognized not only as one of America’s sharpest legal minds, but someone who brings to his work a spirit of decency, modesty, integrity, even-handedness and excellence.”

With Garland standing by his side, Obama said choosing a replacement for the late Justice Antonin Scalia, who died last month, is “not a responsibility that I take lightly.”

“I said I would take this process seriously, and I did,” the president said. “I chose a serious man and an exemplary judge.”

“To find someone with such a long career in public service, marked by complex and sensitive issues, to find someone who just about everyone not only respects but genuinely likes, that is rare,” Obama said. “And it speaks to who Merrick Garland is, not just as lawyer but as a man.”

Despite “a political season that is even noisier and more volatile than usual,” Obama urged the Senate to take up the nomination, saying lawmakers should treat the process “with the seriousness and care it deserves.”

After Obama introduced him, Garland became emotional as he thanked the president. “This is the greatest honor of my life,” Garland said, “other than Lynn agreeing to marry me 28 years ago.”

He added that “a life of public service is as much a gift to the person who serves as it is to those he is serving. And for me, there can be no higher public service than serving as a member of the United States Supreme Court.”

Saying that it was “a great privilege to be nominated by a fellow Chicagoan,” Garland stressed his “fidelity to the Constitution and the law.” If confirmed by the Senate, he said, “I promise to continue on that course.”

Senate Majority Leader Mitch McConnell (R-Ky.) reiterated Wednesday that the GOP-controlled Senate would refuse to consider Garland’s nomination, asserting tweets that Obama made the nomination “to politicize it for the purposes of the election.”

A spokesman for McConnell said the majority leader spoke with Garland on the phone and explained to the nominee his stance on waiting for the next president’s pick.

“Since the Senate will not be acting on this nomination, he would not be holding a perfunctory meeting, but he wished Judge Garland well,” the spokesman said in a statement.

House Speaker Paul D. Ryan (R-Wis.) said he fully supports McConnell’s stand. “We should let the American people decide the direction of the court,” he said in a statement on Wednesday.

Sen. Susan Collins (R-Maine) said she would meet with Garland and “begin the process of evaluating this nomination.”

“Judge Garland is a capable and accomplished jurist,” Collins said in a statement. “The White House has requested that I meet with him, and I look forward to doing so, as has been my practice with all Supreme Court nominees.”

At least a couple of Republican senators acknowledged discussions of whether the GOP Senate might confirm an Obama nominee in a “lame duck” session after the election, should Hillary Clinton be elected president.

“If the election doesn’t go the way Republicans want it, there will be a lot of people open to that, I’m sure,” said Sen. Jeff Flake (R-Ariz.), who sits on the Judiciary Committee.

Clinton, the front-runner for the Democratic presidential nomination, said that Obama “has met his responsibility” under the Constitution and that now it is up to senators to meet theirs.

“Evaluating and confirming a Justice to sit on this nation’s highest court should not be an exercise in political brinkmanship and partisan posturing,” she said in a statement on Wednesday. “It is a serious obligation, performed on behalf of the American people, to ensure a highly qualified candidate fills a vacancy on the Court. That obligation does not depend on the party affiliation of a sitting president, nor does the Constitution make an exception to that duty in an election year.”

Clinton hailed the choice of Garland, saying he has “a brilliant legal mind, and a long history of bipartisan support and admiration.” She called on the Senate to take up the nomination “immediately” and said refusing to do so would be “entirely unacceptable.”

If the Senate declines to take up Garland’s nomination before Obama leaves office, or votes it down, the next president will have the option of resurrecting the nomination or choosing someone else to fill the vacancy on the Supreme Court. Either way, the process would begin anew with the next Congress.

White House officials, however, said they were not entertaining such a possibility. “We expect Chief Judge Garland to be confirmed in this Congress, period,” White House spokesman Eric Schultz told reporters Wednesday in a telephone call.

GOP lawmakers, though, have said since Scalia’s death that Obama should leave the choice of a new justice to his successor and that they have no intention of holding a hearing or a vote on the president’s pick.

Senate Judiciary Committee Chairman Charles E. Grassley (R-Iowa) issued a statement Wednesday in which he did not mention Garland by name but said Republicans’ refusal to consider the president’s nomination was within the bounds of its “constitutional authority.”

“A majority of the Senate has decided to fulfill its constitutional role of advice and consent by withholding support for the nomination during a presidential election year, with millions of votes having been cast in highly charged contests,” he said.

Garland is a Chicago native who graduated from Harvard College and Harvard Law School. After becoming a partner at the law firm Arnold & Porter, he joined the Justice Department, where he handled the drug investigation of then-D.C. Mayor Marion Barry as an assistant U.S. attorney in the District.

Ascending the ranks, Garland became principal associate deputy attorney general, supervising the massive investigations that led to the prosecutions of the Unabomber and the bombers of the federal building in Oklahoma City.

Jamie Gorelick, a former deputy attorney general who worked with Garland at the Justice Department in the Clinton administration, considers her former colleague “supremely qualified” for the high court.

Gorelick praised Garland’s role at the Justice Department in supervising the Unabomber and Oklahoma City investigations.

“We had a lot of very seasoned prosecutors, but when you have a matter that is both substantively difficult and cuts across the department, a really talented person such as Merrick will lead those,” Gorelick said. She added that Garland is a “brilliant lawyer and judge” who is known to be highly collegial even with those across the ideological spectrum.

White House senior adviser Brian Deese, who is overseeing the nomination process, said Garland’s ability to develop trust with different groups, as well as his “fundamental decency,” make him the perfect person for the court in such a divisive time.

“It’s the president’s assessment that he’s the best possible candidate for the circumstances we find ourselves in right now,” Deese said.

Initial reaction from interest groups supportive of the president was mixed. Terry O’Neill, president of the National Organization for Women, praised Garland for “a rigorous intellect, impeccable credentials, and a record of excellence.”

But she also said his record on women’s rights was “more or less a blank slate. Equally unfortunate is that we have to continue to wait for the first African American woman to be named. For this nomination, the so-called political experts ruled that the best choice for the highest court in the nation was a cipher — a real nowhere man.”

“Garland has had a distinguished legal career, and prior to the GOP’s historically unprecedented obstruction, was a favorite of Senate Republicans alongside progressives,” the briefing material says. “When earlier Supreme Court vacancies occurred in the seats now filled by Justices Elena Kagan and Sonia Sotomayor, Utah Sen. Orrin Hatch said he would be ‘very well supported by all sides’ as a SCOTUS nominee.”

The document notes that when Obama was filling the first Supreme Court vacancy of his tenure, Hatch was quoted at the time as saying that Garland would be a “consensus nominee” who “would be very well supported by all sides.” The briefing material includes previous descriptions of Garland by leading news organizations as a potential nominee who would attract support of Democrats and Republicans alike.

Democrats are also preparing to make the Republicans’ opposition to filling the vacancy an issue in the fall election. Speaking in West Palm Beach, Fla., on Tuesday night, Clinton said in her victory speech that one of the reasons the presidential race matters so much is because the Supreme Court appointment has such enormous policy implications.

“Together, we have to defend all of our rights — civil rights and voting rights, workers’ rights and women’s rights, LGBT rights and rights for people with disabilities — and that starts by standing with President Obama when he nominates a justice to the Supreme Court,” she said, prompting large cheers from the crowd.

While the question of who sits on the nation’s highest court is not traditionally a top-tier election issue, Democrats are hoping to use it as part of a broader narrative about Republican resistance to the president’s policies.

David Greenberg, a professor of history and journalism and media studies at Rutgers University, noted that Richard Nixon first elevated the Supreme Court as an electoral issue in 1968, when he attacked then-Chief Justice Earl Warren and his fellow justices.

“It was putting a liberal-dominated court at the center of the liberal establishment he was attacking,” Greenberg said, for “bringing about all these cultural changes” in the country.

At the moment, more Americans appear to be sympathetic to the White House’s argument. Sixty-three percent of Americans said the Senate should hold hearings on Obama’s nominee to replace Scalia, while 32 percent said it should not hold hearings and leave it to the next president, according to a Washington Post-ABC News poll released last week. Majorities of Democrats and independents supported holding hearings, while Republicans were more evenly split (46-49) and more than half of conservative Republicans said hearings should not be held (54 percent).

Administration officials are hopeful that the GOP senators who are most vulnerable this November — Kelly Ayotte (N.H.), Ron Johnson (Wis.), Mark Kirk (Ill.) and Pat Toomey (Pa.) — may lobby their leaders for a vote if they come under fire back home for blocking the nominee.

“The success or failure of this will depend on the pressure that can be brought to bear on those senators who Mitch McConnell marched out to the firing line,” said one former senior administration official, who spoke on the condition of anonymity to discuss internal White House deliberations.