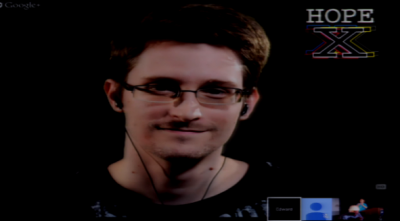 Edward Snowden slammed the FBI on Friday for its claim that only Apple (AAPL) can unlock the San Bernardino shooter’s iPhone that the agency is battling over in a federal court.

The former National Security Agency subcontractor who leaked information about U.S. mass surveillance programs spoke via a live stream from his apartment in Russia to an audience at the Brooklyn Academy of Music in New York.

He said the FBI is attempting to compel Apple to help unlock the iPhone out of convenience, not necessity, because it would take a long time for the agency to develop the tools and expertise to crack the phone itself. (The FBI has said in its legal arguments that only Apple can unlock the iPhone, which has a passcode.)

“While hackers do their stuff in their garage… FBI has not invested in any kind of meaningful forensic capabilities,” Snowden told WNYC’s Brian Lehrer.

Snowden said much the same thing earlier this week, according to The Intercept

A federal court ordered Apple last month to create a new version of its operating system for FBI agents who are attempting to gather evidence from the work phone used by Syed Rizwan Farook, who killed 14 people in December in San Bernardino, Calif. Apple has asked the court to throw out the order, saying the FBI seeks “dangerous power” that could hurt users’ security and lead to a slippery slope through which law enforcement could eventually request to spy on people through smartphone cameras. The U.S. District Court for the Central District of California will hear both parties’ arguments on March 22.

The interview came hours after President Obama said at the SXSW festival in Austin that the tech community should help resolve differences with law enforcement over encryption, according to The Verge (http://www.theverge.com/2016/3/11/11207480/obama-sxsw-2016-fbi-apple-encryption).

The FBI has requested to more than double its budget for forensic and encryption-cracking tools to about $70 million.