How the Syrian revolution went so horribly, tragically wrong 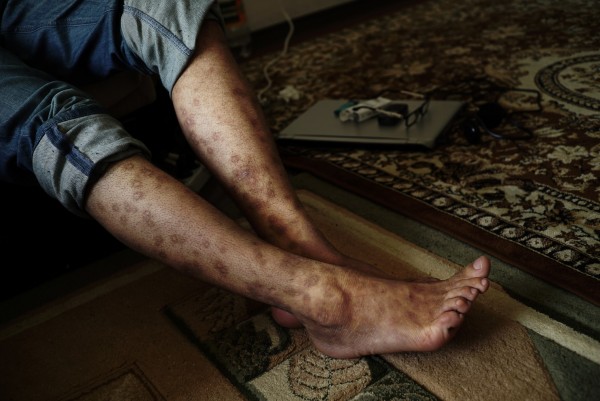 Photographed in 2014, both legs of Syrian opposition activist, aid worker and journalist Karam al-Hamad are scarred from more than 100 cigarette burns he received under torture in a military prison in Damascus for more than a year. (Ayman Oghanna/For The Washington Post)
Share:

By Liz Sly
To get rid of one bad man, you open the door to many.

That is a rough translation of the slogan Wael Ibrahim had written on the banner he was preparing for the next anti-
government demonstration he and his fellow democracy activists were planning in the Syrian city of Aleppo. It was February 2013, and Ibrahim, a truck driver who had become a leader in the protests against President Bashar al-Assad, was trying, as diplomatically as possible, to sustain the spirit of the original revolt without offending the newly ascendant and increasingly extremist Islamists.

He failed. A man who had thrown himself into a struggle against a dictatorial government was threatened, harassed and eventually detained six months later by the Islamic State. He has not been seen or heard from since.

Ibrahim — who had won renown in Aleppo under his nom de guerre, Abu Mariam — had become yet another victim of the ill-fated attempt to bring democracy to the Middle East that was christened, so prematurely, the Arab Spring.

From Egypt to Yemen, Libya to Bahrain, the brief flowering of freedom and hope that surged across the Middle East five years ago has failed more spectacularly than could have been imagined back when people chanting for freedom thronged the streets of towns and cities regionwide.

Syria marks the fifth anniversary of its first peaceful protest Tuesday in the shadow of a brutal war that has sucked in global powers and fueled the rise of radicals such as the Islamic State. Libya and Yemen are likewise locked in savage conflicts.

In other countries, such as Egypt, autocratic regimes have reasserted their control with a vengeance, clamping down on liberties even more fiercely than had been the case before the demonstrations were held.

In all of them, except Tunisia, the moderates who dominated the early days of the revolts have been silenced, imprisoned, hunted down or driven into exile, either by the governments that sought to repress them or the extremists who moved into the vacuum created when state authority collapsed.Whether those early protesters were ever truly representative is in question, said Rami Nakhla, one of the most prominent leaders of the early Syrian protests, directing the Local Coordination Committees from exile in Beirut. He now lives in the southern Turkish city of Gaziantep near Syria’s border, a hub for many of the activists who have been forced to flee.

But he also wonders whether they ever stood a chance. “We are hostage to two choices: either the authoritarians or the extremist Islamists,” he said. “Should we accept this equation? That we endorse either dictatorship or Islamic extremism?”

It is a false choice, but it has served to sustain the twin tyrannies that proved the undoing of the Arab Spring, said Shadi Hamid of the Washington-based Brookings Institution. Since well before the revolts, the region’s dictators have raised the specter of Islamist extremism to scare ordinary citizens into submission and justify their harsh oppression to foreign powers. And extremists exploit the climate of fear to win recruits and justify their own brutal tactics.

“Authoritarian regimes and groups like ISIS both rely on violence and oppression to promote their political objectives,” he said, using another term for the Islamic State. “For regimes, it’s actually a successful strategy, at least in the case of Egypt and Syria. The Assad regime has been able to promote its own narrative very successfully, and many members of the international community say the armed opposition is primarily a radical opposition, that there are no moderate rebels.”

Nowhere have the consequences of the failure been so profound or the costs so high as in Syria. More than a quarter-million people have died. Half the population has been driven from their homes. The world’s worst refugee crisis has overwhelmed neighboring countries and fueled an unprecedented influx of migrants to Europe.

Assad remains in power in Damascus, but the country is in ruins. The Islamic State has overrun a big chunk of Syria and is the primary focus of the foreign powers battling to contain the disaster. Moderate rebels still control territory, but their space is dwindling and also populated by more radical groups.

A wobbly truce has brought some respite, and since the guns fell silent, small crowds of protesters have taken to the streets again, reviving the calls for freedom and democracy that seemed to have been vanquished.

But their numbers are small, and in a reminder of the challenges they face, at least one protest in the city of Idlib last week was forcibly shut down by Islamist fighters, including the al-Qaeda-linked Jabhat al-Nusra.

“We are targeted by everyone. There is Daesh. There are Russian airstrikes from the sky. Nusra is among us,” said Barry Abdullatif, who was one of the first protest organizers in his home town of al-Bab, east of Aleppo, now controlled by the Islamic State.

“It is a miracle there are any moderates left at all.”

The balance shifts
Abdullatif remembers when Islamists began to intrude on the democracy demonstrations he and his colleagues were organizing in the spring of 2011.

The protests still were peaceful and growing in number, but now there were some new arrivals. A group of 25 or so residents imprisoned for Islamist activism before the uprising, among thousands released in 2011, had been let go under an amnesty issued by Assad. Most secular detainees, such as a 15-year-old blogger who had been held on the eve of the protests, were not.

Many Syrians and observers have long suspected that the releases were deliberately intended to radicalize the revolt and convince the international community that Assad was the lesser of two evils.

“It is a matter of record now that Assad released many Islamist prisoners in 2011,” said Robert Ford, the U.S. ambassador to Syria at the time and now with the Middle East Institute.

“The government certainly understood they would join rebel groups, and likely the regime hoped they would commit violent acts that the regime could use to justify its own violence,” he said. “I do not think the Syrian government expected Nusra and the Islamic State to grow so potent, however.”

The Islamists started showing up at the demonstrations, waving banners. “We told them, ‘If you want to raise a black flag, go do it on your own,’ ” and they did, Abdullatif recalled. “More people attended ours.”

The balance shifted, however, after the protesters took up arms, first to defend the demonstrations that were fired on and then to wage outright war. Money for weapons began to pour in from Turkey and the Gulf. At first, most went to the Muslim Brotherhood, the activists say, but other groups quickly emerged that were more extremist.

The rebels played into the government’s hands by tolerating the rise of the radicals and facilitating the emergence of the Islamic State, Ford said. “Not until 2014 did they realize their error with the Islamic State, and they are still coordinating with Nusra,” he said.

Many activists said at the time they had no choice. The United States was lagging on its promises of support, and they felt they needed all the help they could get to confront the government’s use of military force, which began with bullets, then escalated to airstrikes, ballistic missiles and chemical weapons.

But looking back, that was when it all went wrong, Abdullatif said: “The mistake was accepting Islamists at all, and the second was carrying weapons.”

Bringing arms into the equation also opened the door to the proxy war Syria has become. Iran sent money and militias to prop up the government. Qatar, Saudi Arabia and Turkey funneled money to the rebels without much regard to who they were. The United States sought to counter the influence of extremists by backing moderate rebel groups — though it never matched the support that was reaching extremists. Then Russia intervened , launching airstrikes on behalf of the government that U.S. officials say disproportionately targeted moderate rebels.

Syria’s revolt “stopped being a revolution,” said Rami Jarrah, another of the activists in Gaziantep who escaped Damascus in 2011 under threat of arrest by the government. “It’s become a football pitch for regional powers to settle scores and gain benefits at the expense of others.”

Thousands imprisoned
Meanwhile, the democracy activists were languishing in prisons. The Syrian Network for Human Rights estimates that 117,000 people have been detained overall since 2011, and 65,000 of them are still in custody. Thousands have died under torture, and the whereabouts of many others are unknown.

Among them are many who were hauled off the streets in the early, peaceful days of protest, as Karam al-Hamad discovered when he was detained in late 2013.

An activist who had helped organize protests in his home city of Deir al-Zour, Hamad was accused of spying, tortured into confessing and dispatched to Damascus for trial at the Military Intelligence’s notorious Branch 235, also known as the Palestine Branch.

There, he was incarcerated in a basement cell filled with 120 other men, a number that was replenished as prisoners died — 73 in all during his 10-month stay. Some were taken away to be tortured and never returned. Others came back broken and bleeding and died in the night. A bigger number succumbed to the intestinal and skin infections that were rife. One death haunted him, a man from Hama called Abdul-Nasser who had been arrested for protesting in 2011.

“We both liked computers and PlayStation. He also had an iPhone 5s,” Hamad recalled. “He was also in a heavy-metal band.”

Hamad was released in late 2014, after a judge accepted his claim that his confession had been extracted under torture. Had he been accused of being an activist, he said, “they never would have released me.”

He emerged into a changed world. The Islamic State had taken over much of eastern Syria, including Deir al-Zour. Its fighters were hunting down moderate activists as relentlessly as the government, often subjecting them to public executions. Hamad joined the exodus to Turkey.

Ibrahim, the Aleppo protest organizer, was among the first to be targeted.

In an interview with The Washington Post in Aleppo in 2013, he shrugged off the threat posed by the Islamists, saying it was more important to focus on ousting Assad.

“It is not in our interest to open a second front in our revolution,” he said. “We have one enemy now; we don’t want to end up with two.”

Abdullatif escaped his home town under cover of darkness, also in 2014, after being told he was wanted by the Islamic State. Of the 50 or so friends with whom he launched the protests in al-Bab, barely a dozen remain alive. They have died in airstrikes, in battle with armed groups or under torture in prison.

Only one joined the extremists, becoming a member of Jabhat al-Nusra. “He apologized to me,” Abdullatif said, recalling their last meeting. “He told me he only did it for the weapons, and to fight the regime.”

A month later, the friend was dead — blown up by a suicide bomber who detonated his car prematurely and killed his own men.