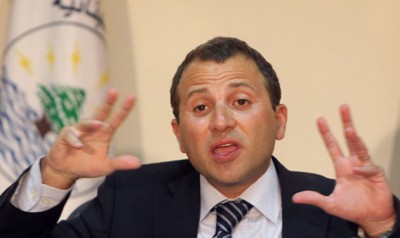 Foreign Minister Gebran Bassil stressed on Sunday that describing   Hezbollah  as a terrorist group at the Arab League was “unacceptable.

Bassil who heads up the Free Patriotic Movement,  a stanch all of Hezbollah  pointed  out that Lebanon had already expressed reservation on that labeling.

In an interview with  the Kuwaiti al-Rai daily Bassil said: “Hezbollah has  a broad representation of Lebanese. It enjoys mass parliamentary and ministerial blocs.”

“We have agreed to the terms of the rest of the resolution. It was normal not to accept describing the party as a terrorist,” added the Minister.

Bassil reiterated that Lebanon condemns the attacks against Saudi missions in Iran and denounced any interference in the internal affairs of Arab countries.”

The Arab League on Friday  also declared the Iranian backed  Hezbollah  militant group a “terrorist” group, after  the Gulf Cooperation  Council adopted the same stance over the movement’s support for the regime in Syria’s war and its interference in the internal affairs of several countries such as bahrain , Yemen and Iraq .

The Arab League   move reflects the worsening tensions between  Iran and the  Gulf Cooperation Council (GCC), of which  Saudi Arabia is a leading  member.

Correspondents say the move by the Arab League, in the wake of the decision by the Saudi-led Gulf Co-operation Council (GCC), will intensify pressure on Hezbollah.

This development comes a month after Riyadh cut ties with Tehran following demonstrations in which its embassy and a consulate were torched, in the wake of the Saudi execution of a  Shiite cleric activist .

The Arab League’s   decision was endorsed by the majority of foreign ministers of the pan-Arab body except for Lebanon and Iraq which expressed “reservations”.

Iraqi FM Ibrahim al-Jaafari’s defended  Hezbollah in a speech before the Arab League in Cairo Friday , which prompted the Saudi delegation to storm out of the meeting.

“Whoever accuses the Popular Mobilization forces and Hezbollah of terrorism is the one who supports and adopts terrorism,” Jaafari , a Shiite  who founded the National Reform Trend party said in his speech.

The Popular Mobilization forces he is referring to are the Iranian and Iraqi   Shiite militias  which are being  led by Iranian  General Qassem Suleimani who heads up the Quds force of the Iranian Revolutionary Guard . The Quds Force  is behind the creation of Hezbollah in 1982.

In January, GCC member Bahrain said it had dismantled a “terror” cell allegedly linked to Iran’s Revolutionary Guards and Hezbollah.

Saudi Arabia and fellow Gulf nations also accuse Iran of supporting Shiite rebels in Yemen, as well as attempting to destabilize their own regimes.

On March 2, the GCC — which also includes Kuwait, Oman, Qatar and the United Arab Emirates — declared Hezbollah a “terrorist” group.

It was the latest step taken by Gulf states against Hezbollah.

It came days after Saudi Arabia in February suspended a $4 billion program for military supplies to Lebanon in protest against Hezbollah.

After that announcement, Saudi Arabia issued a travel advisory urging  its nationals to leave Lebanon and avoid traveling there. Qatar and Kuwait later issuing similar advisories.