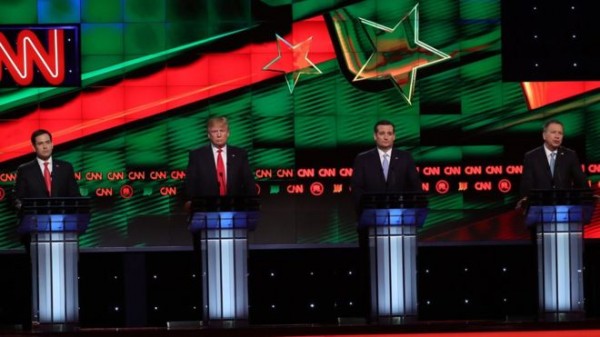 The Republican presidential candidates were asked to be more civil with one another
Share:

Republican presidential hopeful Marco Rubio has attacked Donald Trump for saying that Islam “hates the US”, in a televised debate in Miami.

Mr Rubio, who faces a do-or-die contest in Florida on Tuesday, said Islam had a problem with radicalisation but said many Muslims are proud Americans.

“Presidents can’t just say whatever they want. It has consequences,” he said, to cheers from the audience.

The four Republicans heeded pleas from party leaders to have a civil debate.

But on the issue of Islam, there was clear distance between Mr Trump and the others – all three of his rivals disagreed with him that the families of terrorists should be killed.

Mr Trump said he was tired of being politically correct and that “there is tremendous hate” in Islam.

Mr Rubio took to the stage in his home city of Miami a long way behind Donald Trump and Ted Cruz in the race to be his party’s nominee.

Mr Trump picked up a key endorsement of Ben Carson, who last week dropped out of the race, hours before the debate.

Crucial state contests are being held in Florida and Ohio on Tuesday, as Mr Trump’s rivals try to make up ground.

There are 350 delegates up for grabs on Tuesday, with the winner taking all in Florida.

Mr Trump, a billionaire businessman from New York with no political experience in office, has dominated the news, the polls and the state primary contests so far.

On Wednesday, he added to his list of controversial remarks when he told CNN: “I think Islam hates us, there’s a tremendous hatred. We have to get to the bottom of it.”

There were signs that Mr Trump has been more conciliatory of late.

After additional state wins on Tuesday night, he said he had “great respect” for House Speaker Paul Ryan.

He also discouraged booing at the mention of former Republican presidential candidate Mitt Romney’s name and urged the Republican party to “unify” behind him.

On the Democratic side, Vermont Senator Bernie Sanders and former Secretary of State Hillary Clinton are battling for the party’s nomination.

Mrs Clinton is leading Mr Sanders in delegate counts so far, though his campaign has proved more formidable than expected.

Both parties will determine their nominees at conventions in July, then Americans will pick their new president in November.