Putin is destroying my dream of returning to a free Syria 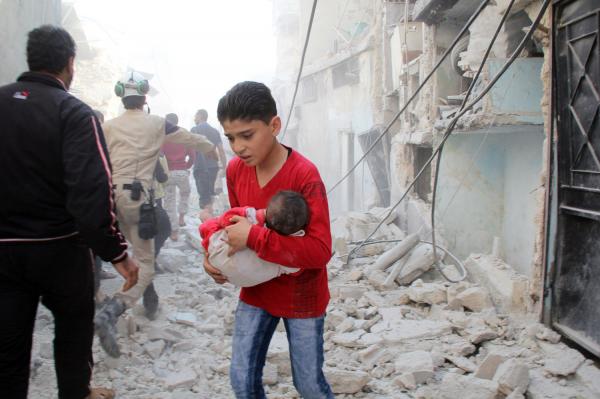 Amnesty International has criticized Russia for conducting airstrikes in Syria that allegedly killed at least 200 civilians within two months. In six attacks, dozens of civilians were killed but there were no obvious military targets nearby, according to Amnesty. File photo by Ameer Alhalbi/UPI | License Photo
Share:
*BY:Abdulhamid Qabbani
The first time I had hope for a better future for my country, Syria, was in March 2011 when the uprising started. Shouts of freedom in the Damascus streets was exhilarating for a country that had spent four decades as a police state. As the Syrian poet Nizar Qabbani wrote: “How are we ever going to write a verse / with locks over our mouths? / And when killers still approach?”

In late 2012, as the Syrian uprising turned into an armed conflict, I received my conscription notice from the army. This meant that I had an obligation to join the Syrian army to fight the rising armed opposition and participate in the crackdown on civilian activists, of whom I was one. I was left with no option but to flee my hometown Damascus to avoid being tracked by police or picked up at one of the regime’s military checkpoints. Within a day, I found myself a refugee in Lebanon. All I took with me was a journal and a few books, including President Barack Obama’s Dreams From My Father, which I was halfway through.

For three and a half years, I have been transient, traveling from southern Turkey, to Europe, and then back again. Today, living by the border, I feel close to Syria, but the hopes I have for a free and democratic homeland seem ever further away. Those dreams are cracked by Russian bombs, the latest in a chain of disappointments.

The first significant blow to the uprising was the lack of international response to the Syrian regime’s chemical attack in August 2013. This was followed by the fall of Azaz, a key town in northern Syria, in September 2013 to extremist fighters from ISIS. This setback was devastating not only to the Free Syrian Army, who were overrun, but also for democratic activists who bore the brunt of ISIS’s crackdown on civil society.

But I have never felt as desperate to hold onto my dreams for a free Syria as I do now, watching Russia’s air campaign on behalf of the Bashar al-Assad regime. Russia has focused its airstrikes on areas held by opposition groups. These areas offer the most promise of what a free Syria would look like.

Growing up in Damascus, I never experienced political freedom. Now, when I cross into the few opposition enclaves in the north of Syria, I feel overwhelmed by a sense of liberation. In the liberated areas, where most of Russia’s bombs fall, there are more than 60 free media publications. In addition, as many as 30 radio stations broadcast from within Syria to bordering countries with programs addressing civil rights and discussing citizens’ complains openly. It is difficult to miss the uplifting liberal artistic expressions in the form of graffiti on bullet-holed walls.

This nascent civil society has been supported by funds coming largely from the U.S. and Europe. But that limited aid is not enough.

Russia is shelling this newly born freedom. Putin’s policy in Syria risks not only at destroying our uprising but also undermining the governance system promoted by the liberal democracies of the West.

At the Arab Spring’s onset, Russia could have leveraged Assad to step down and thus paved the way for a peaceful transition of power. This would have deprived ISIS, which Russia is ostensibly fighting, of the vacuum which enabled its ascendancy. Although Putin has consistently opposed Western initiatives toward peace-building in Syria, the lack of any meaningful action to stop the continuous civilian casualties in Syria makes the international community collectively responsible for the worst humanitarian crisis of our time.

Following last November’s Paris attacks President Obama said: ‘’We are reminded in this time of tragedy that the bonds of liberté, égalité, fraternité are not only values that the French people care so deeply about, but are values that we share.’’

The world rightly stood by France after the despicable attacks against civilians. It has not, however, united around the Syrian activists who are seeking freedom and civil rights. The lack of action by countries that espouse democratic ideals is a betrayal of those ideals.
*Abdulhamid Qabbani is a former Syrian activist and freelance journalist.