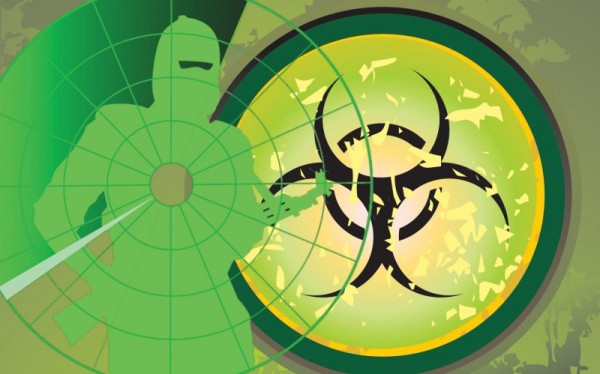 The man has been detained for roughly a month, according to the officials. And in that time, they said, he has given the U.S. the most in-depth understanding of ISIS’s chemical attack capabilities and aspirations.

“They have gotten a lot of information from this guy,” a third defense official explained. “A lot.”

It was based on his information that the coalition conducted at least two strikes this week in Iraq, which targeted ISIS’s chemical program, according to one defense official.

According to a March 5 press release from Operation Inherent Resolve, the American-led coalition struck “an [ISIS] weapons production facility” near Mosul, which was suspected to be part of ISIS’s chemical weapons program. And in a March 7 press statement, the coalition said it struck an ISIS “tactical unit” near Mosul, which also was believed to be related to the program.

Since the Syrian civil war began in 2011, ISIS has deployed two kinds of chemical weapons—crude chlorine and mustard agent. The group is believed to have acquired crude chlorine when the group was known as Al Qaeda in Iraq. How it acquired the mustard agent is unclear, as it could have either acquired from someone else or developed it on its own.

The terror group is suspected of launching as many as 20 chemical weapons attacks across Syria. Independent organizations that have researched such claims have only confirmed ISIS’s use of such weapons in a few of those cases. The Organization for the Prohibition of Chemical Weapons concluded ISIS used mustard gas in three instances in August 2015—in an attack on the city of Marea in Aleppo province and in two attacks in Iraq near the Kurdish capital of Irbil.

The organization concluded that in the Marea attack, “a non-state actor had allegedly used a chemical weapon.”

The Syrian regime also is suspected of using chlorine in attacks against opposition forces.

There are growing concerns that ISIS would like to launch similar attacks on the United States.

Just last month, James Clapper, the director of National Intelligence, said at a security conference in Munich that ISIS “would like to use chemical weapons” in an attack on America.

“It is very clear aspirationally they would like to do more and it is a concern to us in the United States because the indications are that they would like to use chemical weapons against us,” Clapper told attendees of the 52nd Munich Security Conference.

The Daily Beast has known about the man’s cooperation with U.S. officials since last week. But the U.S. military asked the Beast to withhold that information, saying ISIS was not aware that the man was in U.S. custody—even weeks after his detention—and that publishing details of his detention would endanger the destruction of the facilities and the U.S. troops that captured him.

The officials would not elaborate on the man’s role in ISIS, the depth of his knowledge of ISIS’s chemical weapons program or where he was captured in Iraq.

However, the International Committee for the Red Cross “has been able to visit the detainee but in accordance with our confidential approach, we are not in a position to comment on the individual’s identity, location, or conditions of detention,” Trevor Keck, the deputy spokesperson of the Washington Delegation of the ICRC, told The Daily Beast.

The Red Cross “visits people held in detention facilities run by various authorities in Iraq,” Keck said, “in order to monitor their treatment and conditions of detention.”

“The ICRC in Iraq conducted 241 visits to more than 37,000 detainees held in 87 places of detention since 2015,” and has had follow-ups with 922 detainees on “issues related to treatment, health and judicial guarantees,” Keck said.

Once detainees are handed over to Iraqi authorities, what happens to them is less clear. The Daily Beast previously reported that six ISIS fighters who were captured in Iraq last year by Kurdish forces and taken into their custody were tortured. U.S. forces participated in the raid that netted the ISIS fighters.

The detainee, who hasn’t been identified, is at least the second alleged Iraqi ISIS fighter captured and held by the U.S. since coalition airstrikes against ISIS began.

The U.S. was previously holding another ISIS fighter, Umm Sayyaf, the wife of the group’s former oil operations chief. She was captured during a U.S. raid targeting her husband, who was killed during that operation. While in custody, she provided valuable intelligence about ISIS’s operations, U.S. officials said.

Indeed, Umm Sayyaf gave up so much information that U.S. officials have renewed their focus on interrogating ISIS operatives rather than just depending upon airstrikes in the regions controlled by ISIS.

By the end of last year, the U.S. military began sending in Special Forces assigned to expeditionary task forces that were designed, in part, to compare high-value ISIS leaders in Iraq and Syria.

The U.S. military, however, has no plans to hold such detainees but rather intends to release them to Iraqi custody once officials complete their interrogations.