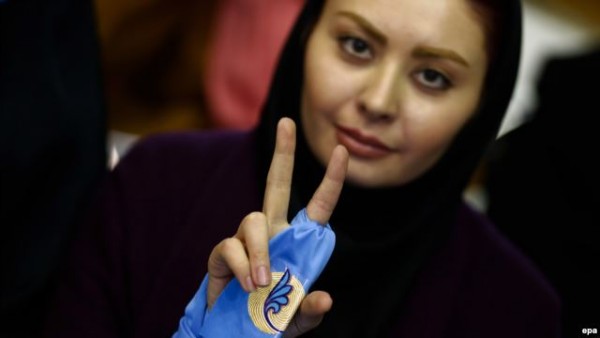 An Iranian supporter of the reformist camp flashes a victory sign during the run-up to national elections elections on February 26. The success of the reformists and relative moderates has given rise to a wave of jokes across Iranian social media.
Share:
Many pro-reform Iranians who voted in the February 26 elections for the parliament and the Assembly of Experts, mainly to make sure fewer hard-liners get elected, have been sharing jokes about what appears to be a landslide win for reformists and relative moderates in the Iranian capital.

The joke started making the rounds on February 27 right after preliminary results showed that allies of President Hassan Rohani had made a clean sweep of all 30 parliament seats in the capital.

Rohani and his ally, former President Akbar Hashemi Rafsanjani, are also leading the race in Tehran for the powerful Assembly of Experts, which has the power to select the country’s next supreme leader.

Joke from Iran: if the election count continues for a while longer, the Shah will return. #IranElections2016 https://t.co/BErfYDsnn2

Hard-line former parliament speaker Haddad Adel ended up being the butt of many jokes when, at one point, it appeared that he would have a battle on his hands to be the only conservative to make it to the new legislature from the Tehran constituency. (He now appears to have been eliminated, according to the latest results.)

One popular Telegram joke described Haddad Adel forlornly resting his head on the legs of Iran’s Supreme Leader Ayatollah Ali Khamenei and telling him: ‘I won’t go the parliament!!!'”

“To keep things calm, [the head of the Guardian Council Ayatollah] Jannati has told reformist candidate Mohammad Reza Aref [who’s leading the parliament race in Tehran]:” Take this kid with you, he will promise to be good. Right, Gholamali [Haddad Adel]?”

Reformists had campaigned to push Jannati and two other ultra-hardline clerics, Ayatollah Mohammad Yazdi and Ayatollah Mesbah Yazdi, out of the new Assembly of Experts, which could end up choosing the successor to 76-year-old Khamenei who underwent prostate surgery in 2014.

According to preliminary results, Yazdi and Mesbah Yazdi appear to have lost their seats and Jannati’s fate seems to be hanging by a thread.

What Khatami did to the Conservatives in #IranElections2016pic.twitter.com/6sjiROwm5w

“Don’t push me [out]!” pleads Jannati in one Telegram skit, a reference to the fact that he is currently languishing in 15th place near the bottom of the list of assembly candidates from Tehran.

The three oppositionists, who seem to enjoy enduring popularity, were put under house arrest in February 2011 after repeatedly challenging the Iranian establishment over the 2009 disputed presidential vote and criticizing human rights abuses.

The joke has the trio’s supporters declaring that “if Jannati doesn’t get elected, we will take to the streets to protest and claim we’re his fans so that they put him under house arrest.”

Several jokes also highlighted the reformist win in Tehran and perceived concerns among Iran’s hard-liners that the contagion could spread to the rest of the country.

One of the most widespread Telegram memes had hard-line Ayatollah Makarem Shirazi, declaring that it was”haram” [forbidden] to continue counting votes

Another joke:
"You banned MY picture?"
"See what I did there?
"With one video!"#IranElectionJokes pic.twitter.com/BNPUPPxiFU


Plenty of Twitter users also riffed on the same theme:

People also poked fun at Iran’s highest authority Ayatollah Khamenei who had said before the vote that even those who don’t approve of him should participate in the February 26 elections.

A viral Telegram message lampooned the supreme leader by having him say: “I told those opposing the system to vote. But not like this!”

Many of the jokes also recognized the role former President Mohammad Khatami played in encouraging people to vote for the list of pro-reform and relatively moderate candidates known as the List Of Hope.

Khatami, who is under a media ban, urged people to vote for reformists in a YouTube video that became an instant hit and helped mobilize support for the reformist camp, something that some witty Twitter users were quick to acknowledge:

Khatami’s video also inspired a Telegram gag that referenced the controversial frontrunner for the Republican nomination in the U.S. presidential election.

In the joke, Iranian Foreign Minister Mohamamd Javad Zarif calls up his U.S. counterpart John Kerry and says: “Hey, man, if Donald Trump is really becoming a problem for you guys let me know. I’ll tell our Mohammad [Khatami] to send a message.”