Gas explosions at faulty Russian coal mine kill 36; cause disputed 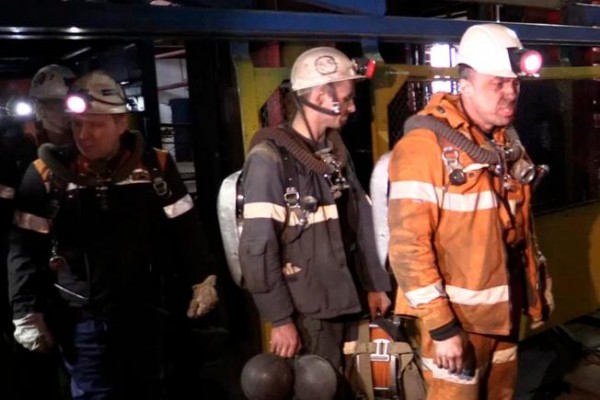 Photo provided by Russian Emergency Situations Ministry press service on Sunday, Feb. 28, 2016 shows rescuers leaving an elevator in Vorkuta, Russia. Russian officials say a total of 36 people are believed to have died at a coal mine where a methane gas leak triggered three explosions and the collapse of the mine. The Russian emergency services say the dead include five rescue workers and a mine worker who were killed when the third explosion rocked the Vorkutaugol mine in Russia’s far north Komi region early Sunday. (AP Photo/Ministry of Emergency Situations press service via AP)
Share:

Three explosions of methane gas at a faulty coal mine in an Arctic Russian town have killed 36 people, including five rescuers, officials and families said Sunday.

Another explosion killed five rescuers and one miner early Sunday as they were digging through the rubble to install insulated blocks with a gas that would help to quell the fire that is still raging in the mine, the Emergencies Ministry said.

Russia’s deputy prime minister said the 26 miners are presumed dead because of high levels of carbon monoxide and methane in the mine.

“We don’t have any hope that the 26 people left in the mine are still alive,” Arkady Dvorkovich said in televised remarks adding that their families will get a million rubles ($13,300) each.

In addition to those dead and missing, nine other miners were injured, and a total of 80 people were rescued from the mine, the Emergencies Ministry said.

The government agency that oversees mine safety, Rostekhnadzor, said that the initial explosions had “natural causes.”

However, relatives of the dead miners insisted that the agency was aware of high levels of methane that could trigger an explosion.

The mine’s managers forced miners to block gas detectors to avoid emergency signals, the daughter of one victim charged.

“They covered them with shirts, buried the detectors,” Darya Tryasukho told the independent Dojd television channel. The detectors “showed there would be trouble.”

The mine may have to be flooded to prevent the fire from spreading, Denis Paykin, director of the Vorkuta coal company, was quoted by regional media as saying Sunday.

Vorkuta, one of Russia’s largest towns above the Arctic Circle, has large coal deposits that have been developed since the 1930s, partially by prisoners of Stalinist-era gulags.