Trump would be ‘selling watches, without inheritance says Rubio 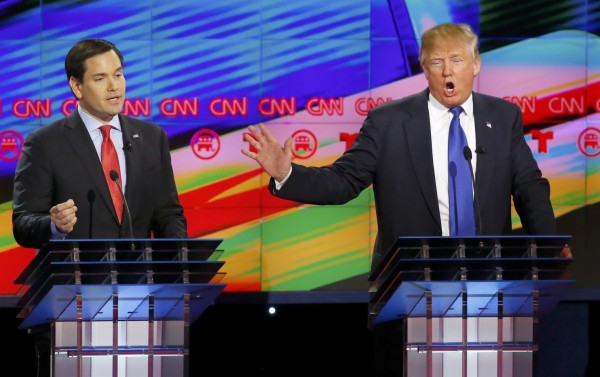 US Sen. Marco Rubio launched a volley of attacks at front-runner Donald Trump in Thursday night’s GOP debate, focusing on an area of strength for Trump: his business record. Rubio criticized the front-runner’s management of “Trump University,” his bankruptcies at his companies, and his use of undocumented immigrants to work on one of his properties in New York.

“If he hadn’t inherited $200 million, you know where Donald Trump would be? Selling watches in Manhattan,” Rubio said.

In the first hour of Thursday’s debate, Rubio was strikingly more aggressive than he had been, and Trump — who had benefitted as other candidates attacked one another – was the subject of a number of attacks. Earlier in the debate, Rubio and Sen. Ted Cruz (Tex.) teamed up to attack Trump for switching his position on immigration – and for hiring illegal immigrants – during Thursday night’s Republican debate, taking the fight to the Republican front-runner at a moment when he is close to running away with the race.

“You’re the only person on this stage that’s ever been fined for hiring people to work on your projects illegally,” Rubio said, referring to a decades-old legal judgment against Trump for hiring undocumented Polish workers at one of his projects in New York. At the time, Trump maintained that he did not know the workers were undocumented.

“I’m the only one on this stage that’s hired people,” Trump said, in a rebuke to Rubio, who has spent nearly all of his life in politics.

“People can look it up,” Rubio said, pressing on. “I’m sure people are googling it right now.” As the two talked over each other (“Wrong. Wrong.” “That happened!”), Trump used the same kind of shutdown he had used on former Florida governor Jeb Bush, now out of the race: “Let me talk.”

Cruz then picked up the attack, saying that he had battled a 2013 effort to pass immigration reform and give undocumented immigrants a legal pathway to citizenship.

“Where was Donald? He was firing Dennis Rodman on Celebrity Apprentice,” Cruz said, mocking Trump’s long career in reality television. He then said Trump had donated to many of the reform bill’s sponsors: “When you’re funding open-border politicians, you shouldn’t be surprised when they fight for open borders.”

Trump had a comeback ready, based on Cruz’s unpopularity in the Senate: “You get along with nobody,” Trump said .”You don’t have one Republican senator backing you. Not one.”

Cruz had a comeback for that, too, though it lacked some of the zing of Trump’s: “Donald, if you want to be liked in Washington, that’s not a good attribute for a president.”

Rubio began the debate with a veiled attack on front-runner Donald Trump, saying that he hoped the Republican Party would not lose the hopeful identity that came from Presidents Reagan and George H.W. Bush.
“They also appealed to our hopes and our dreams. Now we have to decide if we’re still going to be that kind of party,” Rubio said. “Or if we’re going to be a party that preys on people’s anger and fear.”

Rubio had signaled before the debate that he intended to be more harshly critical of Trump, who has benefitted as Rubio, Cruz and others battled in his shadow. That opening statement was a sign he might – although he didn’t actually mention Trump by name. Trump has called for mass deportation of millions of undocumented immigrants, and for barring Muslim foreigners from entering this country.

Later, Rubio attacked Trump for changing his positions on immigration – and for hiring foreigners to work at his properties in Florida.

“Donald, you’ve hired a significant number of people from other countries to take jobs that Americans might have filled,” Rubio said, noting that his mother – an immigrant from Cuba – worked as a maid at a hotel, and that people like her would have been excluded from Trump’s properties.

The debate, which is being held in Houston and being televised on CNN, is the last one before the Super Tuesday primaries next week, when 595 Republican delegates will be at stake. Trump has already won three of the first four GOP contests. If he can win most or all of the 11 states in play that day — a list that includes Cruz’s home state, Texas — Trump will have a commanding advantage in the Republican race.

Cruz and Rubio are the two men who have the best shot at defeating Trump — but who for months have been more concerned with fighting each other in Trump’s shadow.

In the days leading to the debate, Rubio already signaled that he may take on Trump more forcefully than he has in the past. In remarks at rallies and fundraisers, Rubio has criticized Trump’s calls for higher tariffs on China — saying it would lead to a trade war that would make everything more expensive — and for saying he would be “sort of a neutral guy” in mediations between Israel and Palestinians.

Rubio also reportedly told donors said that Trump was effectively fooling Republican voters. He reportedly called “Trump University,” a failed for-profit venture that had resulted in at least two fraud lawsuits against the mogul, a “scam.” One attendee said Rubio described a President Trump as the proverbial dog who caught the car, with no idea of what to do next.

The other two candidates will be Ohio Gov. John Kasich, a relative moderate who placed second in New Hampshire, and former neurosurgeon Ben Carson, who has soldiered on for weeks after his chances of winning the nomination vanished.

The Republican field has shrunk considerably since the first debate in August, when there were 17 candidates divided into an “undercard” debate and a main event. But two things remain the same.

Trump will still have the front-runner’s podium, at the center of the stage.

And the rest of the field may still be too crowded to stop him.

“The reality is that, until the field starts to narrow, it’s going to be very, very hard to take [Trump] out,” said Katie Packer, deputy campaign manager for Mitt Romney’s 2012 campaign and the leader of an anti-Trump super PAC, told The Washington Post. “I think people need to step up and start taking on Trump. Front-runners don’t just stumble. People trip them.”

At various times, it appeared that Trump might trip himself, making statements that would bring down other campaigns. One of his first heavily-criticized statements was on Mexico: “the worst elements in Mexico are being pushed into the United States by the Mexican government.” Not backing down from his characterizing Mexican immigrants as criminals and drug carriers, Trump instead has made it a cornerstone of his campaign, promising to build a wall along the U.S. border and getting Mexico to pay for it.

Earlier Thursday, a new video showed former Mexican President Vicente Fox rejecting one of Trump’s signature promises: that the U.S. would build a massive wall along its border with Mexico, and Mexico itself would pay for it.

“I’m not going to pay for that f—ing wall,” Fox said in the interview with Jorge Ramos, an anchor for Univision and Fusion, which was posted online. “He should pay for it. He’s got the money.” Fox was president of Mexico from 2000 to 2006.

Trump, as is his habit, responded with a tweet: “FMR PRES of Mexico, Vicente Fox horribly used the F word when discussing the wall. He must apologize! If I did that there would be a uproar!”

For Trump, the good news is that everybody else on the stage — with the possible exception of Carson, whose candidacy increasingly seems to defy logic — thinks that he is the one that should stay in to battle Trump and that everybody else should drop out.

And by the time they agree on who should stay, the race could be effectively over.

Cruz, for instance, makes the argument that he is the only Republican who has actually beaten Trump, in the Iowa caucuses. But he has struggled to replicate that success anywhere else. And he has been attacked relentlessly by Trump, who has accused Cruz of lying and dirty campaigning.

“Why would Texans vote for ‘liar’ Ted Cruz when he was born in Canada, lived there for 4 years and remained a Canadian citizen until recently,” Trump wrote on Twitter.

In fact, he is now facing a tough challenge from Trump in Texas, too, a state where Cruz has dominated GOP politics for several years. With Texas Republicans about to vote on Super Tuesday, some recent polls have shown Cruz in a close race with Trump — although others showed Cruz well ahead.

Rubio, by contrast, can argue that he has the support of the GOP’s establishment and big donors. He has been bolstered in the past week by new endorsements, after former Florida governor Jeb Bush — his last rival in the “establishment lane” — dropped out.

But Rubio hasn’t won any states so far: His best showings have been distant second-place finishes in South Carolina and Nevada. And a new Quinnipiac poll showed him trailing Trump badly in his own home state: The poll showed Trump beating Rubio in Florida, 44 percent to 28 percent.

Florida doesn’t vote until March 15, which gives Rubio time to make up that ground. But now, after months in which other Republicans battled each other and let Trump pull away, that time is running out.