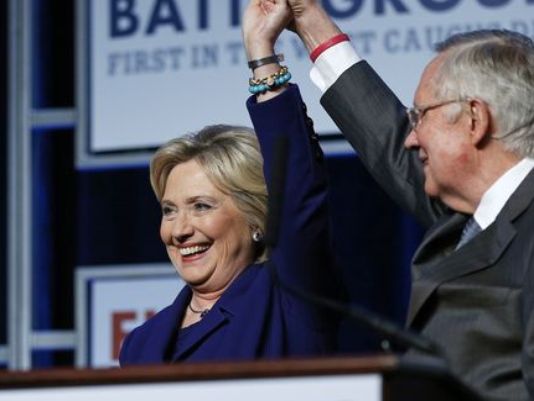 Senate Minority Leader Harry Reid announced Wednesday in an exclusive interview with CNN that he is endorsing Hillary Clinton for president, a sign that Democratic leaders are eager to put the party’s contentious primary fight behind them.

The Nevada Democrat issued a plea for his party to consolidate behind Clinton, who has struggled to fend off an insurgent campaign from Sen. Bernie Sanders, an independent from Vermont.

“I think the middle class would be better served by Hillary,” Reid said.

“I think that my work with her over the years has been something that I have looked upon with awe. She was the first lady. She started the trend toward looking to do something about health care. She understood the issue well, she was the front on the health care during that administration,” he said.

Reid added, “I also think she’s the woman to be the first president of the United states that’s a female.”

Reid’s endorsement makes him the highest-ranking Democrat to get behind Clinton, who won last Saturday’s Nevada caucuses and is the heavy favorite heading into the next primary in South Carolina. And his comments marked a shift in tone for the Nevada Democrat, who in a CNN interview earlier this month was critical of Clinton’s campaign in his state and suggesting that the race could continue until the Democratic convention in July.

On Wednesday, Reid wouldn’t repeat that prediction, but admitted it could continue for a while.

Reid also declined to call on Sanders to drop out if he doesn’t do well in the upcoming Super Tuesday contests on March 1st, saying Sanders’ advisers need to decide the senator’s strategy.

Sanders and Reid have had a close relationship over the years. Despite being an independent with tenuous ties to the Democratic Party, Reid agreed to throw the party’s weight behind Sanders when he won his first Senate race in 2006. And it was Sanders’ decision to caucus with Democrats that helped give Reid the title of “majority leader” for the first time in 2007.

“It was a really wonderful call,” Reid said, adding that Sanders was “so magnanimous, so kind and courteous.”

Reid also said it was a “call of friendship.”

Despite serving in the Senate Democratic caucus since 2007, Sanders has yet to win any support from his colleagues; Clinton, meanwhile, has at least 40 Democratic senators who have publicly expressed their backing.

Initially, Senate Democrats largely wrote off Sanders’ candidacy. But as Sanders has gained steam, largely on the support of younger and more liberal voters, Senate Democrats have stepped up their attacks, saying Sanders is not ready to be commander in chief, criticizing his democratic socialist views and contending that his domestic agenda has little chance of ever becoming law.

Reid would not criticize Sanders.

Across the Capitol, House Minority Leader Nancy Pelosi has not offered her endorsement, but she is widely expected to eventually back Clinton. Reid sought to maintain his neutrality through his home state’s nominating contest, given the prominent role it has played in the overall process.

While Reid helped bring out union and casino workers to the Nevada caucuses that ultimately helped Clinton, he denied that he was tilting the scales in her favor.

In the interview, Reid wasn’t shy about weighing in on the Republican race — and Donald Trump, who won a landslide victory in Nevada Tuesday night.

“The party of Lincoln has become the party of Trump. And that says it all,” he said.