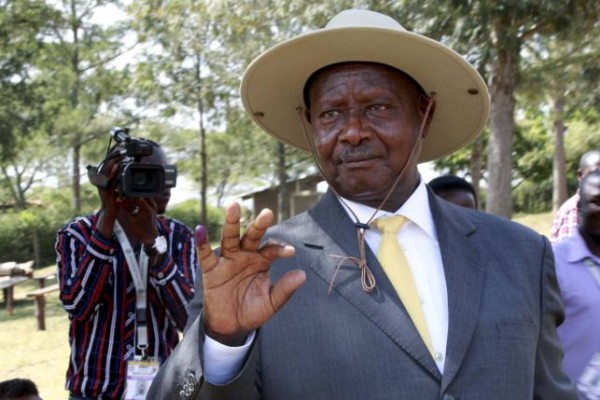 Uganda’s incumbent President Yoweri Museveni displays his inked finger after casting his vote at a polling station during the presidential elections in Kirihura in western Uganda, February 18, 2016. REUTERS/James Akena
Share:

Ugandan President Yoweri Museveni extended his 30-year rule on Saturday, winning an election that international observers said lacked transparency and his main opponent, under house arrest, denounced as a sham.

One of Africa’s longest-serving leaders, Museveni won 60.8 percent of the vote, while main opposition candidate Kizza Besigye secured 35.4 percent, according to the electoral commission.

“We have just witnessed what must be the most fraudulent electoral process in Uganda,” Besigye said in a statement, calling for an independent audit of the results.

Besigye, who had been detained three times this week, said he had been placed under house arrest. A Reuters reporter saw his home encircled by police in riot gear and media were barred from approaching it.

The United States on Friday urged Museveni to stop the security services harassing his opponents. Another of Museveni’s rivals, former prime minister Amama Mbabazi, had also been put under house arrest, according to his spokeswoman.

Museveni, 71, has presided over strong economic growth but is accused at home and abroad of repression of dissent and failing to tackle rampant corruption in the nation of 37 million people.

European and Commonwealth observers criticized the handling of Thursday’s vote.

The EU observer mission said it had been conducted in an intimidating atmosphere, while Commonwealth observers said the poll “fell short of meeting some key democratic benchmarks”.

Eduard Kukan, chief observer for the EU mission, told reporters in Kampala the poll had been undermined by a “lack of transparency and independence” at the Ugandan electoral commission.

“State actors created an intimidating atmosphere for both voters and candidates,” he added.

Besigye urged the international community to denounce the poll win by Museveni, who has won favor with the West by sending Ugandan troops to Somalia to battle Islamist militants with ties to al Qaeda.

“Please reject the temptation to ratify this sham election,” said Besigye, who was Museveni’s personal doctor in the 1980s.

U.S. Secretary of State John Kerry called Museveni on Friday to voice concern over Besigye’s detention, the harassment of opposition figures and the shutdown of social media such as Facebook and Twitter on election day.

“(Kerry) urged President Museveni to rein in the police and security forces, noting that such action calls into question Uganda’s commitment to a transparent and credible election process free from intimidation,” the U.S. State Department said on Friday.

Museveni replied to Kerry that Besigye had tried to assault a police officer and had not been arrested but rather escorted home by police, according to Ugandan media.

“I told Kerry not to worry a lot about the internal affairs of Uganda because we know how to handle the issues,” the Daily Monitor newspaper quoted the president as saying.

Besigye’s detention on Friday contributed to a day of chaos in some parts of Kampala, with opposition supporters hurling rocks at police and erecting street barricades.

Police officers set off stun grenades and fired tear gas at crowds outside the headquarters of Besigye’s Forum for Democratic Change, where senior members of the party accused organizers of rigging the vote.

Museveni brought calm and stability to Uganda after decades of chaos under leaders Idi Amin and Milton Obote, but many opposition voters accuse the former guerrilla fighter of becoming increasingly autocratic and wanting to rule for life.

The opposition had tried to tap into mounting anger among young voters, especially in urban areas, where unemployment is high and many are frustrated by the poor state of schools and hospitals.

“We are disappointed, the election has been rigged,” said 23-year-old Brenda in Kampala, who declined to give her second name out of concern for her security. “I have never seen another president and it seems it will be like that until he dies.”