Clinton’s cozy relationship with Kissinger comes back to haunt her 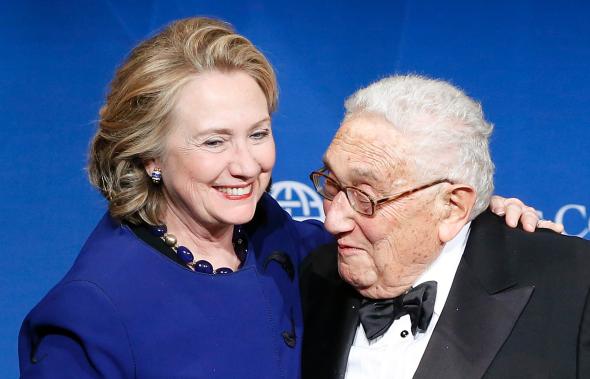 Of all the dastardly deeds for which Henry Kissinger can be blamed, here’s an especially odd one: he made Hillary Clinton lose a foreign policy debate with Bernie Sanders. Last night at the Democratic presidential debate in Milwaukee, in a moment to baffle the youthful voters who helped give Sanders his crushing victory over Clinton in the New Hampshire primary, Sanders (age 74) blasted his opponent (age 68) for being too cozy with Kissinger (age 92).

Kissinger usually gets a free pass in Washington, where celebrity has a way of overshadowing historical analysis, but it’s still jarring to see Hillary Clinton embracing him. After all, in her youth, she protested against the Vietnam war and served as a staffer on the House Judiciary Committee considering impeaching President Richard Nixon for Watergate. But in more recent days, she lauded Kissinger’s historic outreach to China in her 2014 memoir Hard Choices, and wrote a fawning Washington Post review of his latest book in September 2014, calling him a personal friend and adviser while praising the book as “vintage Kissinger, with his singular combination of breadth and acuity.”

Despite Kissinger’s efforts to cultivate Clinton and other grandees, his reputation has been undermined by the realities revealed on the White House tapes. In 1969, he recommended a risky nuclear alert in 1969 to spook the Soviet Union. In September 1971, he privately told Nixon, “If we had done Cambodia in ’66, and Laos in ’67, the war would be history.” And in 1971, in one of the darkest American chapters of the Cold War, he and Nixon supported a brutal military dictatorship in Pakistan while it unleashed a devastating crackdown on what was then East Pakistan and is now Bangladesh. Both the CIA and the State Department conservatively estimated that about two hundred thousand people perished, while ten million desperate Bengali refugees fled into India. Kissinger joked about the massacre of Bengali Hindus, and privately scorned those Americans who “bleed” for “the dying Bengalis.”

In the Milwaukee debate, Sanders announced that he had a “very profound difference” with Clinton. “In her book and in this last debate, she talked about getting the approval or the support or the mentoring of Henry Kissinger,” he said with disbelief. “Now I find it rather amazing, because I happen to believe that Henry Kissinger was one of the most destructive secretaries of state in the modern history of this country. I am proud to say that Henry Kissinger is not my friend. I will not take advice from Henry Kissinger.” He slammed Kissinger for bombing Cambodia, which “created the instability for Pol Pot and the Khmer Rouge to come in, who then butchered some three million innocent people, one of the worst genocides in the history of the world. So count me in as somebody who will not be listening to Henry Kissinger.”

Sanders’ attack was doubly effective, giving him a rare chance to put his rival—a confident former secretary of state who is noticeably more adept on world politics—on the defensive on foreign policy, while also tarring Clinton as a profane creature of Washington. He got to showcase himself as someone who hadn’t been slowly corrupted by establishment cronyism. And the voters who are likeliest to care about this 1970s flashback aren’t Sanders’ young enthusiasts, but baby boomers who should be in Clinton’s camp.

Sanders had a point about Cambodia, although the history isn’t as straightforward as he suggested. While Kissinger deserves some credit for his efforts to end the Vietnam war, he also escalated the conflict and promoted sideshow wars in Laos and Cambodia. When massive bombing failed to wipe out communist sanctuaries inside Cambodia, Kissinger, while considering the arguments of dovish White House staffers, came to support a U.S. ground invasion, which was launched in May 1970. In December of that year, when Nixon complained that the U.S. Air Force was merely “bombing jungles” in Cambodia, Kissinger passed along the order: “A massive bombing campaign in Cambodia. Anything that flies on anything that moves.”

According to a leading Cambodia historian, Ben Kiernan at Yale University, the civilian death toll from these bombing campaigns drove many Cambodians to rally to the radical Khmer Rouge, which went from being a relatively minor guerrilla force to conquering Phnom Penh in April 1975. That November, a few months after the Khmer Rouge began their bloody reign, Kissinger asked Thailand’s foreign minister about a top Khmer Rouge leader: “How many people did he kill? Tens of thousands?” Then Kissinger added, “You should also tell the Cambodians [the Khmer Rouge] that we will be friends with them. They are murderous thugs, but we won’t let that stand in our way.”

Hillary Clinton’s response in the Milwaukee debate was flat-footed. Surely there must be issues where she disagrees with Kissinger. But rather than offering any criticism of him, or mentioning her own opposition to the Vietnam war, she ducked by saying that “whatever the complaints you want to make about him are,” Kissinger is worth talking to because of his “his ongoing relationships with the leaders of China”—a formulation which, while correctly noting Kissinger’s formidable guanxi in Beijing, sounds like cronyism taken to a global level.

Sanders was on much shakier ground when he slammed Kissinger as a proponent of the domino theory in Vietnam, which he, in a particularly Seinfeldian moment, explained in yadda-yadda terms: “You know, if Vietnam goes, China, da-da-da-da-da-da-da.” (He seemed aware that many of his young supporters would not know what the domino theory was: “Not everybody remembers that, you do, I do.”) But China, then in the throes of Mao Zedong’s radical Cultural Revolution, had been communist since 1949, so could hardly be a falling domino; the domino theory was propagated by plenty of Democrats in the Kennedy and Johnson administrations; and Kissinger’s main linkage of China with Vietnam was to hope that an American opening to China would help to end the Vietnam war. More broadly, there’s still ample opportunity for Clinton operatives to beat up Sanders for a New Left critique of American foreign interventionism and globalization.

It’s unlikely that Kissinger is going to be too upset about the disfavor of a Vermont socialist, but this fracas still makes a disagreeable change of pace for someone whose experience of primary season usually consists of Republican presidential candidates lining up to pay homage to him. Sanders gave a welcome reminder of how insipid American political debates about foreign policy usually are, which was momentarily bad for Hillary Clinton and, if it sticks, more lastingly bad for Henry Kissinger. Despite Kissinger’s impressive efforts to gloss his historical legacy, the truth has a way of coming out.