He reportedly arrived in Beirut at dawn from his self-imposed exile in Riyadh for the occasion and is due to speak later in the day at 11th commemoration of his father’s assassination that will be held at 4:30 pm in BIEL

Hariri kicked off his first meetings with officials at the Center House where he held talks with Democratic Gathering chief MP Walid Jumblatt in the presence of the latter’s son Taymour and Nader Hariri and the talks focused on the latest developments.

Rafik Hariri was killed by a massive bomb explosion on February 14, 2005 in downtown Beirut.

There is a lot of speculation in the media about who is going to be present at the Biehl ceremony and what he is going to say in his speech with regards to the presidency.

NNA reported that Marada Movement leader Suleiman Franjieh called Hariri upon arrival in Beirut to welcome him to Lebanon and offer his condolences.
Reports circulated last week that Hariri may officially announce today his endorsement of Franjieh’s presidential candidacy. 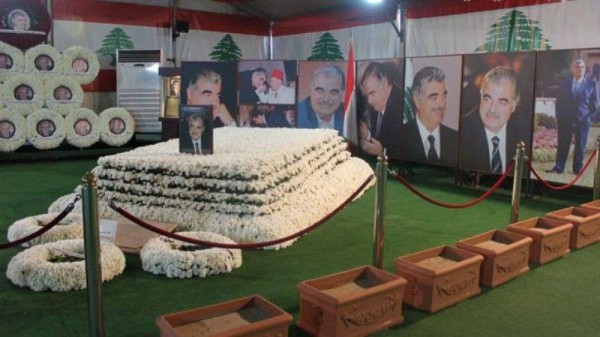 A large number of prominent Lebanese visited Rafik Hariri’s tomb on the 11th commemoration of his assassination, NNA reported

Prayers were held at his grave and the tombs of his fallen comrades, including slain leaders Wissam al Hassan and Mohammad Shatah.

AT 12.55 p.m., the exact hour of his assassination, a torch was lit at the murder site in Saint George areanof downtown Beirut