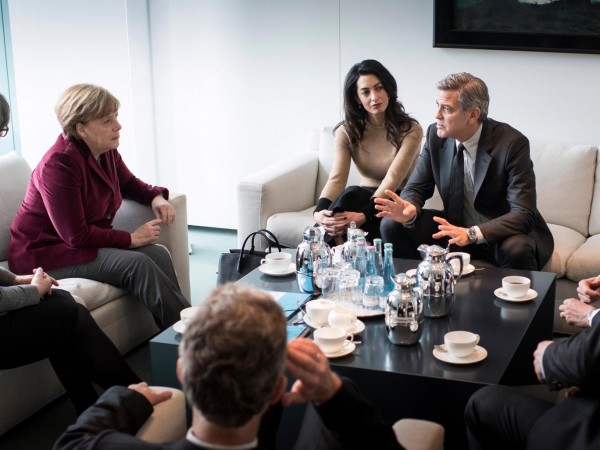 Amid a raging refugee crisis, German Chancellor Angela Merkel took some time off to meet with Lebanese-British human rights lawyer Amal Clooney and actor George Clooney to discuss the current migrant policy and the war in Syria.

The Clooneys are in Berlin to promote the opening of “Hail, Caesar!,” a film starring George Clooney, at the Berlin Film Festival, but announced in a news conference that they’ll be making a pit stop at the offices of Europe’s leading lady to see how they can help with the refugee crisis, according to the BBC.

Germany has accepted 1.1 million refugees in 2015, and many continue to apply for asylum. Despite her country’s generosity, Merkel has come under intense scrutiny at home and abroad for her policies about migrants. Her approval rating has fallen, and opposition lawmakers are calling for her resignation.

“I absolutely agree with her,” Clooney told reporters.

Even if Clooney himself has been active in humanitarian crises around the world, he acknowledged at the Hail, Caesar! press conference that the film industry has been too slow to react.

“The unfortunate thing about the film community is we react to situations much more than we lead the way,” he said.

“The refugee crisis has damaged her profoundly, underscoring the high price of compassion in a risk-averse world. A nation whose World War II past made it fully aware of the dangers of xenophobia, modern Germany was leading by example in the 21st century, becoming a beacon of hope for desperate foreigners fleeing war and poverty.”