Putin is disintegrating Europe, he is a ‘bigger threat to its existence than Isis’ 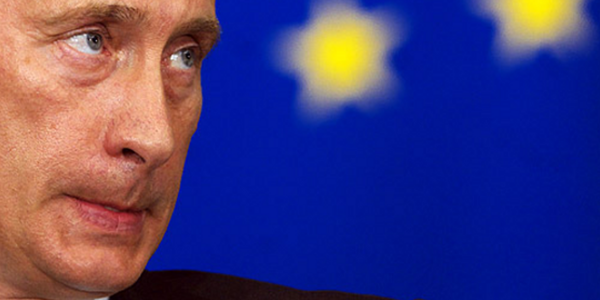 The leaders of the US and the EU are making a grievous error in thinking that president Vladimir Putin’s Russia is a potential ally in the fight against Islamic State. The evidence contradicts them. Putin’s aim is to foster the EU’s disintegration, and the best way to do so is to flood Europe with Syrian refugees.

Russian planes have been bombing the civilian population in southern Syria forcing them to flee to Jordan and Lebanon. There are now 20,000 Syrian refugees camped out in the desert awaiting admission to Jordan. A smaller number are waiting to enter Lebanon. Both groups are growing.

Russia has also launched a large-scale air attack against civilians in northern Syria. This was followed by a ground assault by Syrian president Bashar al-Assad’s army against Aleppo, a city that used to have 2 million inhabitants. The barrel bombs caused 70,000 civilians to flee to Turkey; the ground offensive could uproot many more.

The families on the move may not stop in Turkey. German chancellor Angela Merkel flew to Ankara this week to make last-minute arrangements with the Turkish government to induce the refugees already in Turkey to prolong their stay there. She offered to airlift 200,000-300,000 Syrian refugees annually directly to Europe on the condition that Turkey will prevent them from going to Greece and will accept them back if they do so.

Putin is a gifted tactician, but not a strategic thinker. There is no reason to believe he intervened in Syria in order to aggravate the European refugee crisis. Indeed, his intervention was a strategic blunder because it embroiled him in a conflict with Turkey’s president, Recep Tayyip Erdoğan, which has hurt the interests of both.

But once Putin saw the opportunity to hasten the EU’s disintegration, he seized it. He has obfuscated his actions by talking of cooperating against a common enemy, Isis. He has followed a similar approach in Ukraine, signing the Minsk agreementbut failing to carry out its provisions.

It is hard to understand why US and EU leaders take Putin at his word rather than judging him by his behaviour. The only explanation I can find is that democratic politicians seek to reassure their publics by painting a more favourable picture than reality justifies. The fact is that Putin’s Russia and the EU are engaged in a race against time: the question is which one will collapse first.

The Putin regime faces bankruptcy in 2017, when a large part of its foreign debt matures, and political turmoil may erupt sooner than that. The president’s popularity, which remains high, rests on a social compact requiring the government to deliver financial stability and a slowly but steadily rising standard of living. Western sanctions, coupled with the sharp decline in the price of oil, will force the regime to fail on both counts.

Russia’s budget deficit is running at 7% of GDP, and the government will have to cut it to 3% in order to prevent inflation from spiralling out of control. Russia’s social security fund is running out of money and has to be merged with the government’s infrastructure fund in order to be replenished. These and other developments will have a negative effect on living standards and opinions of the electorate before the parliamentary elections this autumn.

The most effective way Putin’s regime can avoid collapse is by causing the EU to collapse sooner. An EU that is coming apart at the seams will not be able to maintain the sanctions it imposed on Russia following its incursion into Ukraine. On the contrary, Putin will be able to gain considerable economic benefits from dividing Europe and exploiting the connections with commercial interests and anti-European parties that he has carefully cultivated.

As matters stand, the EU is set to disintegrate. Ever since the financial crisis of 2008 and the subsequent rescue packages for Greece, the EU has learned how to muddle through one crisis after another. But today it is confronted by five or six crises at the same time, which may prove to be too much. As Merkel correctly foresaw, the migration crisis has the potential to destroy it.

When a state or association of states is in mortal danger, it is better for its leaders to confront harsh reality than to ignore it. The race for survival pits the EU against Putin’s Russia. Isis poses a threat to both, but it should not be overestimated. Attacks mounted by jihadi terrorists, however terrifying, do not compare with the threat emanating from Russia.

Isis (and al-Qaida before it) has recognised the achilles heel of western civilisation – the fear of death – and learned how to exploit it. By arousing latent Islamophobia in the west and inducing the public and governments to treat Muslims with suspicion, it hopes to convince young Muslims that there is no alternative to terrorism. Once this strategy is understood, there is a simple antidote: refuse to behave the way your enemies want you to.

The threat emanating from Putin’s Russia will be difficult to counter. Failure to recognise it will make the task even more difficult.

*George Soros is chairman of Soros Fund Management and of the Open Society Foundations. He is author of The Age of Fallibility: Consequences of the War on Terror.