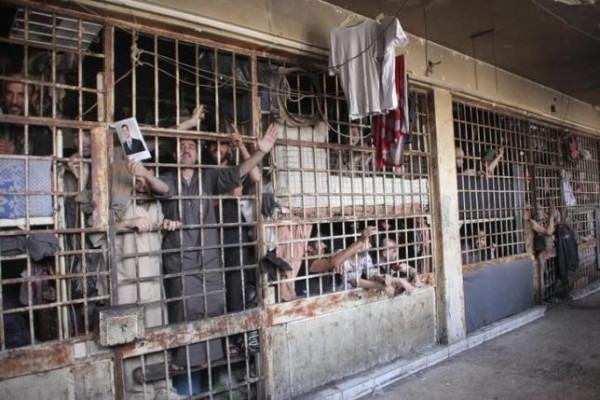 Inmates are seen behind bars in Aleppo’s main prison May 22, 2014. UN investigators on February 8, 2016 accused Damascus of “extermination” in its jails and detention centres, saying prisoners were executed, tortured to death or held in such horrific conditions that they perished.REUTERS/George Ourfalian
Share:

UN investigators on Monday accused Damascus of “extermination” in its jails and detention centres, saying prisoners were executed, tortured to death or held in such horrific conditions that they perished.

The report painted a stark picture of prisons and detention centres run by the Syrian authorities.

“It is apparent that the government authorities administering prisons and detention centres were aware that deaths on a massive scale were occurring,” the report said.

It accused Damascus of committing “extermination as a crime against humanity.”

The Syrian government was also guilty of committing a range of other war crimes and crimes against humanity, including murder, rape, torture and enforced disappearance, the investigators said.

The report, which stretches back to the beginning of the conflict in March 2011 and through last November, is based on 621 interviews, including with more than 200 former detainees who witnessed one or more deaths in custody.

“Nearly every surviving detainee has emerged from custody having suffered unimaginable abuses,” commission head Paulo Pinheiro said in a statement.

The survivors had detailed how their cellmates were beaten to death during interrogation or in their cell, left to die of severe injuries sustained from torture or from unattended medical conditions, the report said.

Others died from the “inhuman living conditions”, including severely overcrowded and unhygenic cells and lacking food and clean water, with many prisoners for instance forced to use their toilet as a source of drinking water.

Most of the detainees who are known to have died are men, women and children as young as seven, the report said.

Abuse, squalid conditions and deaths were consistent across places of detention and over time, and must have been condoned up the chain of command, it said.

“There are reasonable grounds to believe that high-ranking officers — including the heads of branches and directorates — commanding these detention facilities, those in charge of the military police, as well as their civilian superiors, knew of the vast number of deaths occurring in detention facilities,” it said.

“Yet (they) did not take action to prevent abuse, investigate allegations or prosecute those responsible.”

Damascus is meanwhile not the only one abusing and killing detainees.

The report detailed horrific abuses carried out in detention centres run by the Islamic State group, including massacres and executions of children.

The group, notorious for its brutal public executions by beheadings and throwing people off high buildings, has committed war crimes and crimes against humanity, the report said.