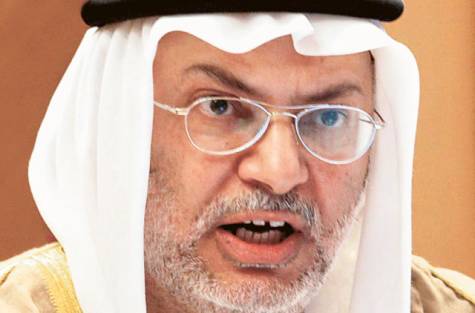 The United Arab Emirates (UAE) said on Sunday it was ready to supply ground troops to help support and train an international military coalition against Islamic State in Syria provided such efforts were led by the United States.

Asked whether the UAE could be expected to send ground troops to Syria, and if so under what circumstances, Minister of State for Foreign Affairs Anwar Gargash said:

“I think that this has been our position throughout … that a real campaign against Daesh has to include ground elements,” he said, referring to Islamic State’s name using the Arabic acronym.

Saudi Arabia, one of several Sunni Muslim Gulf Arab states, including the UAE, who are opposed to Islamic State, said last week it was ready to participate in any ground operations in Syria if the U.S.-led coalition fighting Islamic State militants decided to start such operations.

Gargash said that any potential supply of troops would not be particularly large.

“We are not talking about a thousand troops but we are talking about troops on the ground that will lead the way, that will train, that will support … And I think our position remains the same and we will have to see how this progresses.”

“Of course an American leadership in this effort is a pre-requisite,” Gargash said.

He added that the UAE had been frustrated at the slow pace of the international efforts against Islamic State “although there has been some progress in Iraq recently, of confronting Daesh.”

Gargash said the UAE had always stated there also needed to be a “genuine political process in Baghdad that will encompass the Sunnis” in Iraq, which has a Shi’ite-led government.

Following Saudi Arabia’s announcement, Syria’s foreign minister said on Saturday Damascus would resist any ground incursion into its territory and send the aggressors home “in coffins”.

Sunni heavyweight Saudi Arabia and most other Gulf states are opposed to Syrian President Bashar al-Assad.

Russian and Syrian government forces have intensified an assault on rebel-held areas around the Syrian city of Aleppo, prompting tens of thousands of refugees to flee to the Turkish border.

On Sunday, aid trucks and ambulances entered Syria from Turkey to deliver food and supplies to those fleeing the escalating government assault on Aleppo.
REUTERS