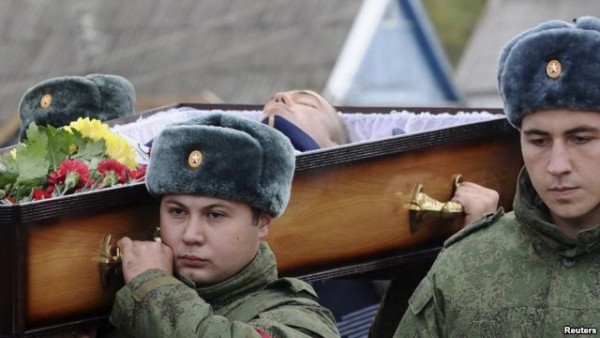 Russian servicemen carry the coffin of Vadim Kostenko at his funeral in the village of Grechnaya Balka on October 28. Kostenko, 19, was buried in his home village in Russia’s Kuban region, about 65 kilometers northwest of Krasnodar, on October 28 — the first Russian serviceman confirmed to have died while serving in Syria. The Russian military says Kostenko hanged himself,
Share:

A Russian military adviser has been killed by mortar fire in Syria, the Russian Defense Ministry said Wednesday.

The officer’s death is the third combat casualty the Russian military has suffered since it launched its air campaign in Syria four months ago.

A Russian pilot whose warplane was downed by a Turkish fighter at the Syrian border was shot dead by militants as he descended by parachute on Nov. 24. His crewmate survived and was evacuated to safety, but a Russian marine was killed in action during the rescue mission.

Moscow says its air campaign has targeted the IS and other extremists and rejects claims by the U.S. and its allies that moderate opposition groups also have been hit by Russian strikes.

Speaking during a trip to Oman Wednesday, Russian Foreign Minister Sergey Lavrov dismissed the Syrian opposition demand to halt airstrikes, saying they will continue until the IS, Jabhat al-Nusra and other extremist groups are defeated.

Russian President Vladimir Putin has ruled out Russian troops’ involvement in ground action in Syria. However, Russia has sent an unknown number of military advisers to Syria and also deployed ground troops guarding the Russian air base in Syria’s coastal province of Latakia, the main stronghold of President Bashar Assad’s minority Alawite sect.

Moscow says that Russian military advisers are in Syria to help its army master weapons provided by Russia and insists that they haven’t joined combat.

However, speaking in December at a meeting honoring Russian military officers for their action in Syria, Putin said that “positive things have happened there thanks to you and your comrades, who have been working in the air, and, in fact, have been leading the Syrian military units.”

Putin’s spokesman Dmitry Peskov said then that the president’s statement didn’t mean that Russian military officers have been put in charge of some Syrian army units but referred to a “coordination of Syrian army’s offensive operations with air support.”