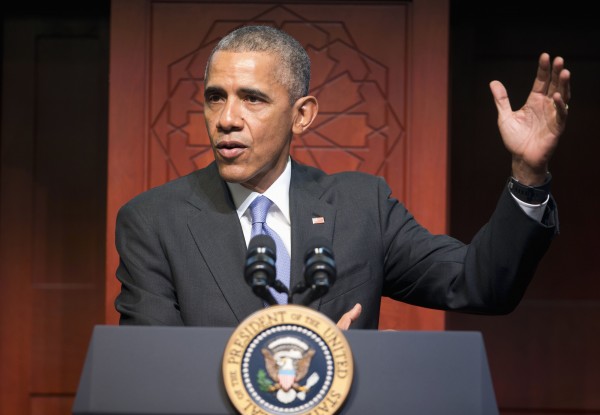 President Barack Obama speaks to members of the Muslim-American community at the Islamic Society of Baltimore, Wednesday, Feb. 3, 2016, in Baltimore, Md. Obama is making his first visit to a U.S. mosque at a time Muslim-Americans say they’re confronting increasing levels of bias in speech and deeds.(AP Photo/Pablo Martinez Monsivais)
Share:

President Barack Obama, in his first visit to a mosque in the United States, said Wednesday he was seeking to rebut “inexcusable political rhetoric against Muslim-Americans” from Republican presidential candidates.

Attempting to recast what he said was a warped image of Islam while encouraging members of the faith to speak out against terror, Obama described Muslims as essential to the fabric of America.

“Let me say as clearly as I can as president of the United States: you fit right here,” Obama told the audience at the Islamic Society of Baltimore, a 47-year-old mosque with thousands of attendees. “You’re right where you belong. You’re part of America too. You’re not Muslim or American. You’re Muslim and American.”

As he decried GOP counterterror plans that would single out Muslims for extra scrutiny, Obama insisted that applying religious screens would only amplify messages coming from terrorist groups. In his final year in office, Obama has sought to use his public platform — however waning — to advocate against what he sees as dangerous threads in the political discourse.

“We can’t be bystanders to bigotry,” Obama said. “Together, we’ve got to show that America truly protects all faiths. As we protect our country from terrorism, we should not reinforce the ideas and the rhetoric of the terrorists themselves.”

Describing conversations with young Muslim parents whose children are worried about being removed from the country, Obama demanded that people of all faiths be accepted without bias into the United States.

“You could not help but be heartbroken by their worries and their anxieties,” Obama said of an earlier conversation with young Muslim community leaders. “Some of them are parents, and they talked about how their children were asking, ‘Are we going to be forced out of the country? Are we going to be rounded up? Why do people treat us like this?’ Conversations you shouldn’t have to have with children. Not in this country.”

White House officials said Obama was looking to issue a forceful counterpoint to the language favored by some Republican presidential candidates like Donald Trump, who has proposed banning all Muslims from entering the country until tighter antiterror measures are put into place. But they also hoped to counter GOP claims that Obama hasn’t been forceful enough in demanding that Muslim leaders help root out extremism.

Obama offered a calibrated message on that front Wednesday, citing the work of Islamic centers while identifying areas for improvement.

“Here at this mosque, and across our country and around the world, Muslim leaders are roundly and repeatedly and consistently condemning terrorism,” he said. “And around the globe, Muslims who’ve dared to speak out have often been targeted and even killed So those voices are there; we just have to amplify them more.”

In his speech, Obama cited a long history of Islam in America, and demanded more positive depictions of Muslims in American media.

“We have to … lift up the contributions of the Muslim-American community not when there’s a problem, but all the time. Our television shows should have some Muslim characters that are unrelated to national security. It’s not that hard to do,” Obama said.

Obama has visited mosques in the past, but never inside the United States, which is home to 2.75 million Muslims, according to the Pew Research Center. Before Wednesday, many Muslim groups had called for him to schedule a stop at a U.S. mosque as a public rejection of Islamophobia, the same way President George W. Bush did in the days after the September 11, 2001, terrorist attacks.

But for Obama, who continues to be dogged by conspiracy theories that suggest he himself is a Muslim (Obama is a Christian), a stop at an Islamic center proved far more complicated the first seven years of his term. A CNN/ORC poll in September found that 29% of Americans said they believed Obama was a Muslim, including 43% of Republicans.

He alluded to the conspiracy theories on Wednesday, saying the same rumors had plagued Thomas Jefferson.

“The President’s trip is extremely timely. It couldn’t have come at a better time,” said Farhana Khera, the executive director of Muslim Advocates, who cited an uptick in vandalism at mosques, and violence against Muslims entering and exiting places of worship, as indications the time was right for a presidential visit.