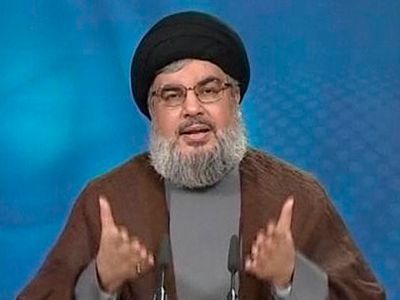 Hezbollah leader Hassan Nasrallah made another TV appearance on Friday from an undisclosed location to speak up on the presidential election.

He started his speech by condemning the attack in Al Ahsaa , Saudi Arabia and praising the efforts his ally Speaker Nabih Berri .

He denied that Iran is behind the presidential crisis in Lebanon.

“Iran has nothing to do with the presidential issue and it has not and will not interfere in it.” He said

“Iran has stressed that the presidential issue is a domestic affair and that it would support what the Lebanese would agree on … If you are serious, go to internal dialogue instead of waiting for regional and international developments, since waiting is not in your interest.” He added.

He defended Iran’s system, of democracy:

“As for the issue of Iranian democracy, Iran has organized more than 35 elections in the past 37 years and the polls were never suspended, despite the wars and bombing. But we in Lebanon are searching for any excuse to postpone the elections and we don’t have a constitutional authority to address the differences. ” This was a possible response to the criticism of Iranian system of democracy by the Lebanese media and some politicians.

In response to accusations against Hezbollah over the presidential election he said:

“Hezbollah has been accused that it is seeking to bargain over the issue of the election and that it wants something in return for facilitating the vote. They alleged that we want a constituent assembly or a greater share in state institutions. When I spoke of a settlement I mentioned concessions and I noted that it would abide by the Taef Accord, but some parties resort to animosity and use all illegitimate means.”

Commenting on Hezbollah’s silence on the latest rapprochement between the Lebanese Forces and the Free Patriotic Movement , he said

“We refrained from addressing the presidential issue in the media because this issue requires direct action and communication. It must stay away from overbidding, incitement and blackmail.” He said .

“Our relations with our allies are based on trust, honesty and mutual respect. We meet over common principles and this political camp does not have a sole leader. We manage disputes among us in a friendly and respectful manner.”

“Our alliances are not only based on political interests but also on trust and friendship.” He added.

Since LF chief Samir Geagea’s endorsement of the presidential candidacy of former FPM leader MP Michel Aoun earlier this month, there has been speculation that Hezbollah no longer considers the lawmaker its candidate for the presidency.

But Nasrallah today reiterated his backing to Noun

“We have an ethical and political commitment to support General Aoun’s nomination and ever since we allied with him, he has not erred against us,” said Nasrallah

“Even if another dear friend is nominated, it will not push me to renounce my ethical commitment to General Aoun, and this does not mean that Franjieh does not deserve to become president,” Nasrallah added.

“We honor our commitments even if we lose politically,” Nasrallah stressed, noting that Hezbollah would only consider backing another candidate should Aoun voluntarily decide to withdraw from the race.

Addressing Marada’s supporters, Nasrallah said Hezbollah would have taken the same stance had it committed to Franjieh’s nomination a year and a half ago.

He urged further “dialogue, communication and discussions,” calling for “a real understanding aimed at electing a president who enjoys consensus without giving the impression that a camp has won over another.”

“We are not with rushing things and the issues are moving forward on the basis of internal dialogue,” Nasrallah added.

Guarantees
Denying claims that Hezbollah is seeking to maintain the presidential vacuum, Hezbollahh’s chief noted that his party would head to parliament “tomorrow” if it guarantees that Aoun would be elected president — even without any so-called “package settlement.”

“We would go to parliament and take part in the elections and we would not demand a package settlement, a constituent assembly or constitutional amendments. Our demands from the package settlement have been fulfilled seeing as both candidates are from March 8,” he noted.

Franjieh claims he has 70 votes of of 127 . Since Hezbollah will not go to the parliament unless ” there is a guarantees that Aoun would be elected president” , the presidential vacuum will continue according to analysts.