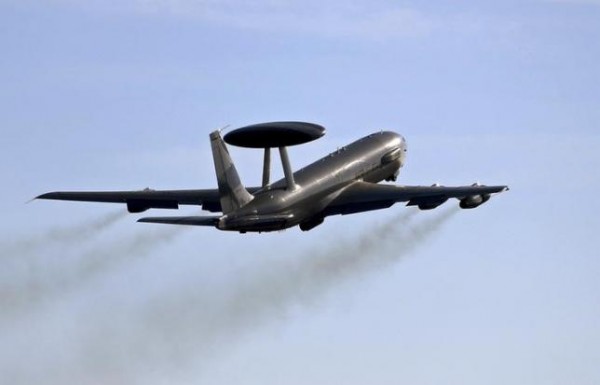 A NATO AWACS (Airborne Warning and Control Systems) aircraft is seen taking-off for a flight to Romania from the AWACS air base in Geilenkirchen, near the German-Dutch border in this April 16, 2014 file photo. REUTERS/Francois Lenoir/Files
Share:

NATO defense cuts slowed sharply in 2015, alliance data showed on Thursday, also revealing a split between big-spending eastern European nations fearful of Russia and others such as Italy that are still reducing their budgets.

Russia’s 2014 annexation of Crimea, failing states on NATO’s borders, and the spread of Islamic militancy have refocused governments on the need to defend home territory after more than a decade of NATO-led operations in Afghanistan.

NATO’s defense spending as a share of economic output fell 1.5 percent in 2015, the sixth straight year of cuts, dragged down by a 12 percent decrease in Italy, the U.S.-led alliance said in its annual report.

The 2008/09 financial crisis and the ensuing euro zone crisis forced many NATO allies into drastic measures to reduce their budget deficits, leading to sometimes sharp cuts in defense spending.

“We have started to move in the right direction,” Stoltenberg told a news conference, saying that 16 allies spent more on defense in real terms in 2015 and there was also an increase in spending on new equipment. “The cuts have now practically stopped among European allies and Canada.”

Poland’s decision to increase defense spending by almost a quarter, as well as a strong showing in the Baltic nations that want more NATO troops in the region, helped offset the decrease in Italy and smaller reductions in Britain, Belgium and France.

Stoltenberg said NATO was now facing “the biggest security challenges in a generation”, pointing to potential risks from its former Cold War adversary Russia as well as on its southern flank, ranging from Libya to Iraq and the wider Middle East.

He cited the need to invest in modern equipment and also more surveillance and intelligence to counter cyber attacks.

“We see a more assertive Russia to the east, a Russia that has invested heavily in defense over several years and which has also shown the will to use military force to change borders in Europe,” he said, referring to Crimea.

NATO and its biggest contributor, the United States, have warned European allies since the 2008/09 financial crisis that the alliance’s military power and influence is at risk while countries such as China and Russia increase their budgets.

Britain, Poland, Greece and Estonia are the only European nations to meet a NATO goal of spending at least 2 percent of gross domestic product on defense.