Rapprochement between Aoun and Geagea gets the blessing of the Vatican 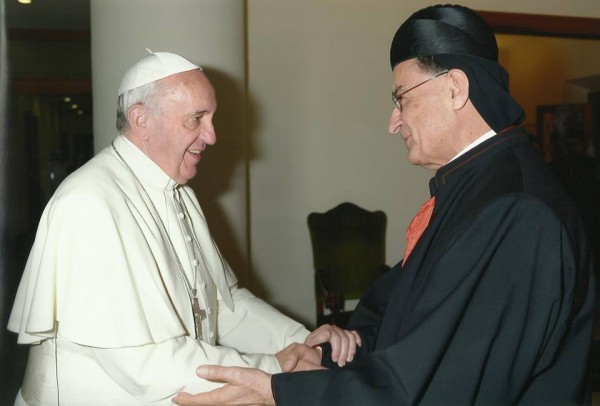 Al-Joumhouria newspaper reported on Tuesday that the Vatican expressed its satisfaction with the latest rapprochement between the Lebanese Forces leader Samir Geagea and former leader of the Free Patriotic Movement MP Michel Aoun reiterated its warning that the presidential vacuum puts the Christians of the country in danger.

Maronite Bishop of Beirut Boulos Matar told al-Joumhouria that the meetings of Patriarch Beshara al-Rai in Rome “have been positive.”

“The Vatican believes that the Christian reconciliation meeting, which took place in Maarab, helps the presidential elections,” he added.

The Vatican supports any reconciliation that takes place among the different Lebanese factions, Matar told the newspaper.

Geagea endorsed his long-time rival MP Michel Aoun, despite the fact that he is March 14th candidate and the first one to announce his candidacy.

The bishop revealed that France continues to work with Vatican officials to help the Lebanese elect a new president. “They are also following up the issue with the Iranians during (President Hassan) Rouhani’s visit to Paris.”

Rouhani traveled to Italy on Monday on his first visit to Europe since Tehran’s nuclear deal with the West and met Pope Francis who reportedly reiterated concerns over human rights abuses and the death penalty in Iran and asked Rouhani to help protect Christians in the Middle East.

Lebanon’s presidential crisis, is expected to be among the major topics that will be discussed by Rouhani and French President Francois Hollande.

Bkirki sources told An Nahar daily that the Vatican insists on the swift election of a president.

The 35th parliament session has been scheduled for February 8 to elect a successor to former President Michel Suleiman whose term ended in May 2014, but An Nahar quoted sources of the FPM, MPs of the Change and Reform bloc and allies as saying they “will not participate in a parliament session that does not guarantee to get Aoun the presidential post,” and that this stance “has been coordinated with Hezbollah following the Maarab rapprochement.”

Hezbollah is reportedly awaiting the green light from its backer Iran before declaring its official position following the rapprochement between Geagea and Aoun.

Patriarch Rai confirmed Tuesday that Pope Francis is holding consultations with all the regional and international players who can influence the presidential impasse in Lebanon , stressing that “the Lebanese must play the key role.”

“The Lebanese must make up their minds and be at the level of all people’s expectations,” said Rai at Beirut’s airport upon his arrival on Tuesday from his visit to the Vatican.

“The pope as well as Vatican Secretary of State Cardinal Pietro Parolin and the secretary for relations with states are all concerned about Lebanon, especially about the presidential election,” the patriarch added.

He said that the Pope and the Vatican’s top officials call on all Lebanese and on political and parliamentary blocs to “elect a president, because it is unacceptable to keep the situation in Lebanon like this.”

“This concern is a tangible concern and they are following it up with all the parties who have a say in this regard but the Lebanese must play the primary role,” Rai added.