France faces major travel disruptions. One in five flights cancelled due to strike 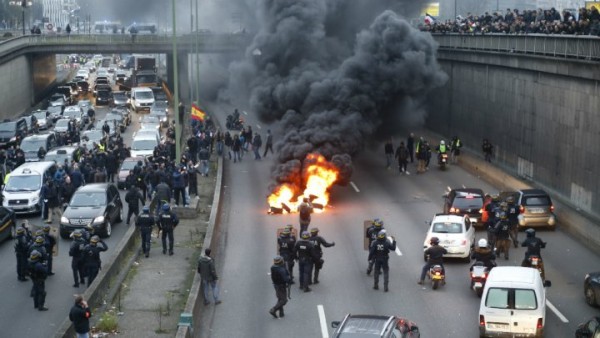 The French civil aviation authority DGAC called Monday on airlines to cancel one in five flights as a preventive measure ahead of the air traffic controllers’ strike. Meanwhile, FRANCE 24’s Jonathan Walsh, reporting early this morning from a taxi picket line on the outskirts of the French capital, said the taxi protest looked set to be “massive”.

Air France said it would operate all of its long-haul flights and more than 80 percent of its short- and medium-haul flights in France and elsewhere in Europe, but that “last-minute delays or cancellations cannot be ruled out.”

Noting that the controllers’ strike was coinciding with the taxi drivers’ action, the airline warned its passengers that access to Paris’s Charles de Gaulle and Orly airports, as well as those of Toulouse, Marseille and Bordeaux, could be “greatly disrupted”.

easyJet said it had cancelled 35 flights, mainly within France but also to or from Switzerland, Italy and Spain.

The controllers’ unions want to be exempted from proposed changes to how salaries are calculated, which they say would hurt their purchasing power.

Taxi drivers are protesting at what they see as unfair competition from private hire cabs such as Uber, and the government’s inability to enforce laws designed to protect their industry.

Uber continued to run the low-cost UberPOP service in France for several months following a ban imposed in January 2015, leading to a spate of violent protests by taxi unions in June.

At Porte Maillot, one of the major entries into Paris, taxi drivers had already set up a barricade early Tuesday morning. Smoke and flames could be seen rising from burning tyres.

San Francisco-based Uber finally shut down UberPOP in July after two of its French bosses were arrested and charged with “misleading commercial practices (and) complicity in the illegal exercise of the taxi profession”.

Despite the UberPOP ban, taxi dispatchers in Paris say business has shrunk 20 to 30 percent.

Ahead of Tuesday’s strike, the spokesman of the Taxis de France collective, Thierry Guichard, appealed for calm, saying on French radio: “We don’t want any violent protests (because) that would be counter-productive.”

But he faulted the government for failing to act on the situation and said it should “ensure respect for the regulations”.

Thousands of taxi drivers — who are also seeking compensation for their loss of market share – are expected to observe the strike across France.

Meanwhile some 5.6 million civil servants have been called to down tools to protest against labour reforms proposed last September affecting pay and career advancement.

The leftist FO union says that, with inflation, a July 2010 freeze on the index used to calculate salaries has cost civil servants eight percent of their purchasing power.

The striking unions also denounce job losses totalling some 150,000 since 2007 and say the hospital sector is especially in need of new jobs.

Civil Service Minister Marylise Lebranchu said unfreezing the index would not be enough to satisfy the unions.

Jean-Marc Canon of the hardline CGT union said it would be “light years from what we want”, demanding that wages keep up with inflation and “significant measures aimed at recovering the losses since 2010.”

Travellers on Tuesday may also encounter roadblocks set up by a different set of protesters: farmers upset over falling prices.

Some 200 farmers in the Reims area east of Paris set up roadblocks on major arteries Monday in solidarity with livestock farmers in northwestern Brittany, who resumed their protests after suspending them for the weekend, blocking roads with tractors and burning tyres.

The farmers’ unions are demanding that distributors and major food companies pay equitable prices for their produce and livestock.

Also Tuesday, kindergarten and primary school teachers are striking for higher pay, with about a third, or 100,000, expected to take part, according to their union, which predicts a stay away rate of up to 45 percent in Paris.