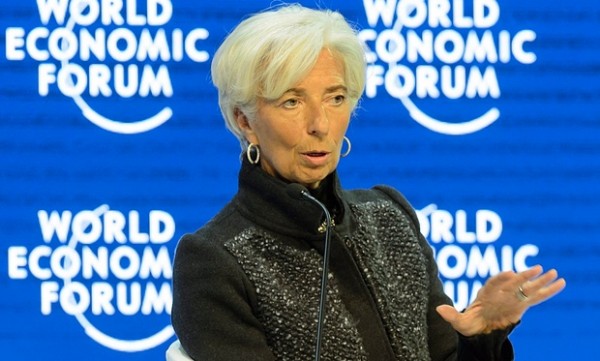 Fears of a British exit from the European Union are adding to the list of concerns causing turbulence on global financial markets, the IMF’s managing director Christine Lagarde said on Saturday.

Speaking at the World Economic Forum in Davos, she called for a swift deal that would ensure the UK could remain in the EU, for the good of the European and world economies.

The comments came after a volatile week which saw sharp falls in world markets, triggered in part by concerns over a slowdown in the Chinese economy and uncertainty about the impact of the fall in the price of oil. On Wednesday, the FTSE index fell to its lowest level in more than three years, before recovering some ground later.

Lagarde said Europe’s overall economic outlook had improved recently and that she expected global growth this year to be 3.4%, up from 3.1% in 2015. However, she had two big concerns – a possible British exit from the EU and the threat of a collapse of the Schengen passport-free travel agreement under the weight of refugees.

With regard to “Brexit”, she said her worry was “whether there is a deal to be had between the United Kingdom and other members of the European Union, which we hope very much because it would really be conducive to more stability and more a cohesive economic zone”.

She agreed with those warning that the refugee crisis could “make or break” the EU’s Schengen agreement. Failure to handle the crisis could put the arrangement, seen as an essential element of the single market, at risk. However, Lagarde told a panel in Davos that a proper strategy and policy on how to manage the new pool of labour could add around 0.2 percentage points to growth across the eurozone.

Rachel Reeves, the Labour MP and member of the Commons Treasury select committee, says any prolonged global downturn could have a serious impact on the UK economy, and particularly George Osborne’s deficit-cutting strategy. Writing on theguardian.com, Reeves warns that George Osborne’s plan risks being blown off course, raising the possibility of more cuts or tax increases.

Citing recent calculations by the Office for Budget Responsibility, Reeves says a failure to rebalance the UK economy has placed it more at risk. “A surplus of more than £5bn would now be needed in the final quarter of this financial year to meet the chancellor’s targets. If that surplus doesn’t materialise, that means even more cuts and tax increases or further drift in the deficit reduction plans – already extended by five years.”

She also ridicules Osborne’s claim in his autumn statement in November that the good times were returning. “Just two months ago Osborne used his autumn statement to boast about the ‘improvement in the public finances’ that allowed him to U-turn on unpopular cuts to tax credits and policing while delivering a plan that would leave Britain ‘ready for whatever storms lie ahead’. It is extraordinary how quickly those words have come to seem so incredibly complacent.”

Osborne, also in Davos, said he was confident of an EU deal. “There is goodwill out there with the other member states, and the institutions of the European Union. We’ve now got to make it happen,” he said.

Even at the best of times Britain has always been a semi-detached member of the EU. The first post-war Labour governments turned down the opportunity to participate in the negotiations that led to the birth of the forerunner of the EU in the early 1950s. Since then Britain has often been more sceptical of the European project than committed to it; the country has been called “the awkward partner”. Britain eventually joined what was then called the European Communities under a Tory government in 1973, as Europe seemed to be doing so well economically. But the next Labour government quickly held a referendum on membership in 1975. The majority, on that occasion, voted to stay in, but over the past few decades British governments have kept their distance as others within Europe pursued “ever closer union”. Britain did not join the single currency, and it is not a member of the Schengen passport-free travel zone. Traditional hostility to the EU has increased in recent years with the arrival of hundreds of thousands of east Europeans (quite legally, under EU rules) to find work, which has caused parties such as UKIP to assert that they are hogging an unfair proportion of the housing, school-places and health services that should go to Britons.

David Cameron, the prime minister, has promised an in/out referendum vote on Britain’s EU membership by the end of 2017 if the Conservatives remain in power on May 7th. Several other smaller parties, notably the UK Independence Party (UKIP), are campaigning specifically to leave the EU. Moreover, polls show that any referendum would be an extremely tight one.

But it is unclear how the referendum would actually work. No country has ever voted to leave the EU before. Mr Cameron has promised to renegotiate the terms of Britain’s relationship with the EU before such a vote, to get a better deal for Britain. If those negotiations, in areas like immigration, proceed well then his government would presumably recommend that people vote to stay in the EU. If not then a Conservative government might conceivably recommend that Britain leave. But it may also be very uncertain by the time that the referendum is held exactly what these “renegotiations” add up to, especially if there is no agreement on a treaty change. The Labour Party and the Liberal Democrats oppose Mr Cameron’s referendum.

The consequences of a Brexit a hard to gauge. Those in favour of leaving argue passionately that it would liberate Britain from the suffocating hold of EU red tape and political interference, and free up the country’s businesses to trade more successfully with the rest of the world. Those against a Brexit argue, with equal passion, that it would jeopardise Britain’s trade with its major commercial partner (now worth about £400 billion a year). A Brexit would also make the country a much less attractive destination for foreign investment in Britain, as many companies come to the country in part because of its access to EU markets. In fact, much would depend on how Britain’s relations with the EU fare after a Brexit. The country could become like Switzerland, which has an association with the EU, or more like Norway and Iceland, which are inside the European Economic Area, and thus the internal market, but with no power to change the rules of that market. Or, Britain might find a spurned EU an unwilling partner. What is clear, however, is that any referendum will invite a prolonged period of uncertainty, both before and after the event. That alone should create plenty of political and economic turmoil in Britain, regardless of the referendum vote itself.

The Guardian/ The Economist