Saudi FM: U.S. is aware that Iran is “world’s chief sponsor of terrorism ” 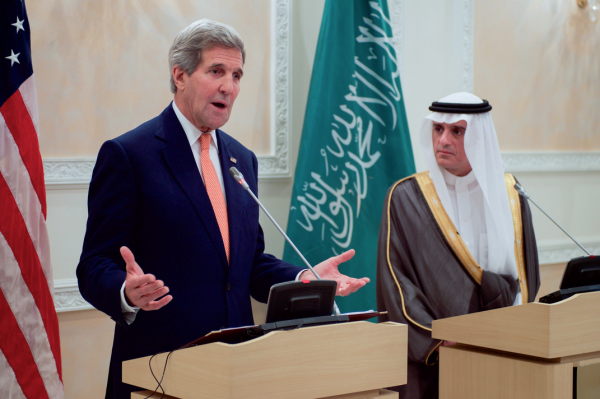 Riyadh: Saudi Arabia on Saturday said it does not see a “coming together” of Iran and the United States, which is well aware of Tehran’s regional “mischief”.

The kingdom and its Gulf neighbours perceive a lack of US engagement in the region, particularly in the face of what they see as Iran’s “interference” in Yemen, Syria, Lebanon and elsewhere.

Those feelings crystallised with a historic international deal – backed by the United States and five other major powers – which this month lifted crippling economic sanctions on Iran in return for a scaling back of its nuclear capabilities.

“No, I don’t see a coming together of the United States and Iran. Iran remains the world’s chief sponsor of terrorism,” Saudi Foreign Minister Adel Al Jubeir said at a joint news conference with US Secretary of State John Kerry.

Kerry and Al Jubeir spoke after they attended meeting of the six-nation Gulf Cooperation Council.Kerry arrived in Saudi Arabia on Saturday hoping for an easing of tensions between Riyadh and Tehran.The US chief diplomat is also scheduled to meet with top officials of the Syrian opposition ahead of UN-sponsored peace talks with the regime of President Bashar Al Assad.

He will hold talks with King Salman and his powerful son, Deputy Crown Prince Mohammad Bin Salman, who is the defence minister.

Saudi Arabia and some of its allies cut diplomatic ties with Iran this month after angry mobs ransacked Riyadh’s embassy in Tehran and a consulate in the second city of Mashhad.

The attacks were widely condemned and led to a string of Arab and Gulf states scaling back ties with Iran.

Riyadh says the attacks were against international norms and Iranian leaders, including Supreme Leader Ali Khamanei, have tried to distance themselves from the attacks since then.

“We understand the Saudi anger over the attack on their facilities in Iran,” a senior US State Department official said before Kerry’s arrival.

“But we also understand that lessening tensions is an important objective not only for the United States but for the region”.

Kerry has long sought to reassure his Gulf allies about the overtures to Iran, and will continue those efforts in Riyadh.

Tensions between Saudi Arabia and Iran, have caused concern around the globe. China, France and Pakistan have all sought a de-escalation.

“Khamanei’s remarks, I think from our perspective, are extremely noteworthy,” the State Department official said.

“And hopefully, maybe that will open up the possibility that the situation will resolve and that the Saudis will find their way forward in reopening their embassy in Tehran.”

Saudi Arabia and Iran support opposite sides in the Syria and Yemen wars.

But the State Department official said “one of the things that we think is relatively positive” is that neither Iran nor Saudi wants the bilateral problems to affect issues like Syrian peace negotiations.

“We also, of course, think that it’s important that the Saudis and the Iranians be able to have some kind of modus vivendi, if you will,” that would allow a return to political negotiations on Yemen.

A Saudi-led military coalition since March has been supporting local forces and the internationally recognised government against the Iran-backed Al Houthi militants.

Kerry said on Saturday after talks with Gulf Cooperation Council (GCC) states in Saudi Arabia that he was confident Syria peace talks would proceed.

“We are confident that with good initiative in the next day or so those talks can get going and that the UN representative special envoy Staffan De Mistura will be convening people in an appropriate manner for the proximity talks that will be the first meeting in Geneva,” he told reporters in Riyadh.

During his one-day stop, Kerry is to meet Riad Hijab, general coordinator of Syria’s largest opposition coalition, ahead of UN-brokered peace talks.

Kerry arrived from the World Economic Forum in Davos, Switzerland, where on Thursday he expressed confidence that those talks will go ahead on Monday in Geneva despite a dispute over who would represent the country’s opposition.

Hijab insists the delegation from his High Committee should be the only opposition representative.

The committee’s decision to name a member of the Saudi-backed Islamist Jaish Al Islam rebel group as its chief negotiator has drawn criticism from some of its own members as well as opposition figures excluded from the coalition.